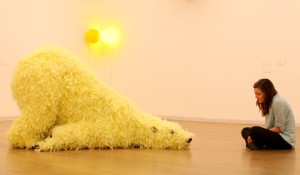 ***EDITORIAL USE ONLY***
Elizabeth Evans looks at Have you seen me before? By Paola Pivi, which is a sculpture of a large polar bear covered in fluffy yellow chicken feathers, at the opening of the Collection Sandretto Re Rebaudengo: Have you seen me before?, at the Whitechapel Gallery in east London which opened from today until 8th September 2013, PRESS ASSOCIATION Photo. Picture date:Tuesday June 18, 2013. Have you seen me before? is the fourth and final display of rarely seen works from the Collection Sandretto Re Rebaudengo. Bringing together major international artists the display includes photography, sculpture and film which play on the idea of the absurd. Photo credit should read: Geoff Caddick/PA