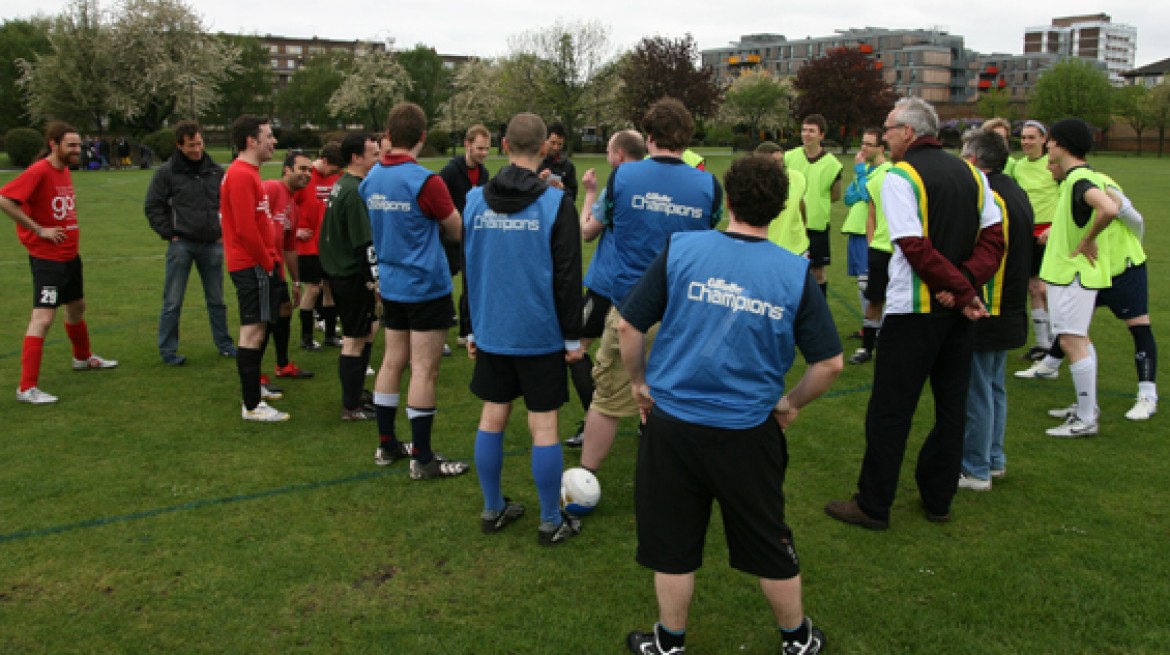 Staged in the run up to the general election and using Asger Jorn’s formulation of three teams playing on a hexagonal pitch, the teams represented each of the main political parties and play to win the ideological argument. Philosophy Football FC adjudicates this game of three halves.

Philosophy Football proposed the following rules for the three sided game, which draw on the original ‘situationist’ philosophy.

They therefore suggested the following:

1. SCORING
A team does not count the goals it scores, only the goals it concedes. The winner is the team that concedes the fewest goals.

2. THROW-INS / CORNERS
On the hexagonal pitch, each team has two sides of the six-sided pitch: the side with the goal (the ‘backside’) and the side opposite to your goal (the ‘frontside’). If the ball goes out on one of your two sides, you get the throw-in / goal-kick. If it went out off a player, the throw-in or corner goes to the team whose own goal is nearest to where the ball went out.

3. REFEREES
“The game deconstructs the mythic bi-polar structure of conventional football, where an us-and-them struggle mediated by the referee mimics the way the media and the state pose themselves as “neutral” elements in the class struggle.”, however there will be two referees making discerning philosophical judgments.

4. LENGTH OF TIME
Ideally, teams will play until people get bored, start to wander off, fall asleep etc: however, three thirty minute ‘halves’ with teams rotating goals should work well.

5. NO OFFSIDES
There will be rolling subs, rush goalies etc.

Taking this too seriously probably mis-understands the nature of Situationist art. As long as the three teams sign up to the above five rules, we envisage enormous fun and a philosophical challenge to the view that politics is boring. Perhaps Three Sided Football is the true ‘art of politics’..