On the occasion of her new CIRCA commission at Piccadilly Circus, artist Joseph O’Connor spoke with Emma Talbot, the 8th winner of the Max Mara Art Prize for Women, about her momentous project, lockdown experimentations and the creative women who inspire her most.

We are honoured and very excited to have you as part of CIRCA’s c.20:21 programme for this month on the Piccadilly Lights screen, in collaboration with the Whitechapel Gallery and the Max Mara Art Prize for Women. Perhaps we can start by asking why you were interested in this commission?

The prospect of being able to realise some work for the screen at Piccadilly Circus was super exciting to me, because it offered the potential to address the zeitgeist of our times so directly. During lockdown, I’ve really had to ask myself how art could or should function. What can art do in relation to a set of contemporary conditions we’d never experienced before. The CIRCA project, for artists to make works for the iconic outdoor screen extended the potential for art to have a life in a city. Situating my animations, that address the problematics of accelerated capitalist structures and their empty promises and appeal to us to reimagine our futures differently, within a space commonly used for advertising seemed apposite. 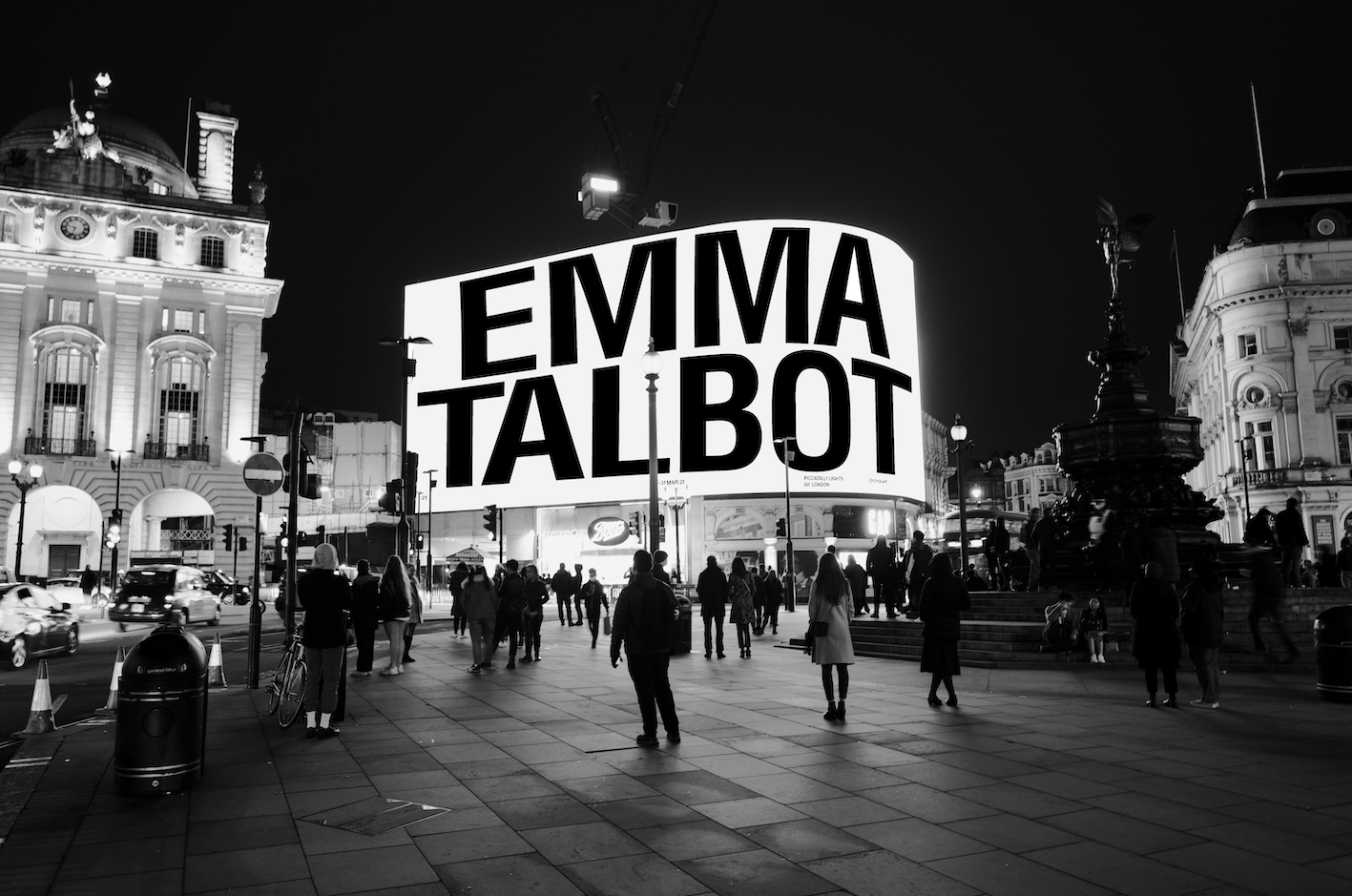 Can you tell us a bit more about your reason for splitting the month into four parts, and four films?

The four animations reflect the year we’ve had, since we were first in lockdown, divided into four narrative ‘seasons’. The ‘seasons’ focus on dark withdrawal (winter), the breakdown of structures (autumn), renewal and healing (spring) and the warmth of community (summer).

Your first film is entitled A year of Dark Shadows. What are some of the themes and narratives found in this new work?

In this animation, a woman is trying to survive by gathering sticks and branches, in a volatile, malignant world. The environmental toxicity is due to the virus, but also pre-existing problems such as climate change, divisive political problematics or shady activity on the dark web.

The woman retreats to a cave, alone. She uses her bundle of kindling to make a fire – connecting to ancient survival methods. On her own in the cave, the fire either threatens to consume her in her own negativity or to release her to dream more openly – to connect with and to listen to nature’s messages. She starts to mark and release her experiences by painting on the walls of the cave. After a long sleep, Spring pulls open her hibernating eyes and, stepping outside, she finds a virus-free environment where healing plants have grown tall.

Your work is often grounded through the words of female writers and thinkers such as Rebecca Solnit, Arundhati Roy and Valarie Kaur. Who inspired your first film, A year of Dark Shadows, and why?

A year of dark shadows was inspired by all kinds of information about instability from around the world in the news every day. During the pandemic I began to listen to lots of online discussions about how our future could be shaped and reimagined. It was interesting that many of these challenging and hopeful discourses were coming from women such as Valerie Kaur, Rebecca Solnit and Arundhati Roy, who wrote The Pandemic is a Portal. Roy’s essay describes capitalism as a train wreck – we can either try to assess it, examine it’s parts and decide whether we want to help fix what is broken or ‘look for a better engine’. It’s the idea of a portal to a different, more caring, responsible future that seems visionary to me.

What are your favourite five books and what would you recommend us all to read?

The German Benedictine visionary and mystic Hildegard of Bingen is an important influence in this new work. Why did you pick her?

I wanted to ally contemporary visionaries with ancient counterparts, who still speak to us today. Hildegard Von Bingen was a visionary from the 12th century, whose work we know because she felt compelled to write her visions down, to make music and to produce works about healing. The activity of creative making as a conduit for ideas that can serve the future seemed important to me. I also like the idea of a voice that speaks to others about structures that are inherent in nature. I visually described Hildegard von Bingen in my animation as a bird with a woman’s head who flies through time to call out to others, a voice to convey visionary ideas and bring people together.

Are there any particular female figures whose words you believe should receive more attention?

Arundhati Roy’s essay, The Pandemic is a Portal, is important because it gives an idea about the possibilities in the future through the lens of problematics that are evident to Roy where she lives, in India. To be able to encounter first-hand experiential information that is so distinct and precise, but that also helps us all think about our own situations is crucial. To hear voices from a range of sources is the implicit message of my animation ‘Chorus’. I have also been interested in activists such as Starhawk, Osprey Orielle Lake and Valerie Kaur as well as Isabelle Stengers.

Your CIRCA commission coincides with Women’s History Month. If you could have a zoom with 5 women throughout history who would they be and why?

I would like to zoom Anaïs Nin and talk to her about her process of journaling and writing, Agafia Lykova, who lived her whole life in isolation in one of the remotest parts of Russia, about self-sufficiency, Hildegard Von Bingen to hear about medieval life, healing plants and her visions, Meret Oppenheim to talk about about her pieces Ghost with Sheet (1962) and Six Little Primeval Animals and a Snail’s Shell (1978)  which I love and Doris Stokes, to hear what life after death is like!

What is one of your sources of inspiration that may surprise people?

I don’t know how surprising this is, but I’m really interested in Peter Fenwick’s work on near death experiences and research on the experience of dying.

We want to congratulate you for winning the Max Mara Art Prize. What are you looking forward to most during your six-month Italian residency with Collezione Maramotti in Italy?

Thank you, I am so looking forward to the residency! Apart from the opportunity to experience the culture and life of Italy, there are so many things to look forward to – researching Etruscan Pottery in Rome with the Director of Villa Giulia, learning about intarsia knitting with Miss Deanna in Reggio Emilia, visiting Permaculture sites in Sicily and seeing Gustav Klimt’s painting ‘Three Ages of Woman’ at first hand.