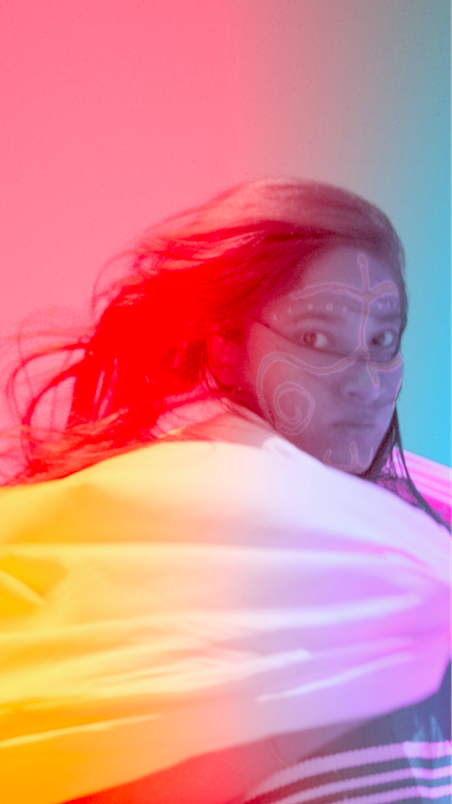 A menacing, other-worldly sound pulsates from the screen; we’re drawn into a technicolour desert from which emerges a young Wayuu girl. ‘Have you been sent by God?’ asks the male, Spanish, voice in Sophia Al-Maria’s 2017 video The Magical State – in Wayuu Naiki she responds: ‘I was not sent, I was summoned’. In a fierce, almost deranged voice, this spirit proclaims a curse: ‘I emerged from the womb of half a billion years … I am your death with a metal grin’.

Within this exchange is controlled rage and female power, channelled through the girl who has been awoken from her slumber through deep time, geological time, at the bottom of the ocean. Sophia Al-Maria once coined the term ‘Gulf Futurism’ to define a particular kind of aesthetic irony: the hyper-futuristic glamour and architecture of the Gulf since the 1980s, projecting a future image of itself, yet fundamentally enabled by the destruction of the planet through oil extraction. Much more than a tongue-in-cheek observation, this highlights a major theme in Al-Maria’s work which is how we understand and narrate the major ecological shifts that are happening on a planetary scale, or the so-called Anthropocene. Having grown up between the US and Qatar witnessing the cultures of capitalism that have engineered our crisis first hand, Al-Maria takes a unique perspective here.

The Girl who Fell to Earth (2012) is Al-Maria’s memoir, a candid portrait of a dual life and at times surreal adolescence (from Washington State to Doha and back, and again), finding in music and science fiction a refuge and a roadmap of how to exist in a bizarre world. Sci-Fi remains at the heart of her practice, drawing on influences from William Gibson to Octavia Butler and Ursula K. Le Guin. Her major commission for the Whitney Museum of American Art, New York, Black Friday (2016), takes the distinctly Ballardian theme of death in a shopping mall.¹ The mall becomes the site of enquiry; a temple to consumerism designed to disorientate, commanding one to shop, yet also a common denominator between the Gulf and the US – this is the dystopian architecture of capitalism no matter where you are in the world.

The political urgency of personal experience underpins Al-Maria’s practice. In no work is this as viscerally felt as Virgin with a Memory (2014), the title of a book and exhibition based on her to-be-completed feature film Beretta. A feminist revenge thriller set in Cairo, where the lead-character embarks on a killing-spree; the book features extracts of the script alongside diary entries documenting the frustration of the film-making attempt. Parallel to her artistic practice Al-Maria has a career as a writer for film and television and in some ways this can be seen to inform aspects of her writing. What is laid apparent in this project in particular is Al-Maria’s dexterity in carrying narrative across media, in this instance installation, text and film.

For the new texts commissioned by the Whitechapel Gallery, Al-Maria has chosen to adopt what she terms the ‘mini-mega narrative’, using the hyper-subjective as a gateway to narrate the major-global. These essays will start from a deeply personal place – exploring health, sickness and trauma. In this, Al-Maria is grounded in a feminist lineage: not only is the personal political but the personal is planetary. By beginning from a subject position of sickness or trauma, the project asks what other ways of existing in the world we must embrace. Beyond this, we might also ask which spirits may be summoned in a quest to find the answers.