Just Imagined… Behind the Scenes

In spring and summer 2021, Whitechapel Gallery collaborated with artists at Submit to Love Studios to produce a collective response to Eileen Agar: Angel of Anarchy, the major retrospective shown at the Gallery. Submit to Love Studios is home to a group of artists who are all members of Headway East London in Hackney — a charity supporting brain injury survivors, their families and carers. They work collectively in an open studio environment, and all projects are co-produced between staff and members. 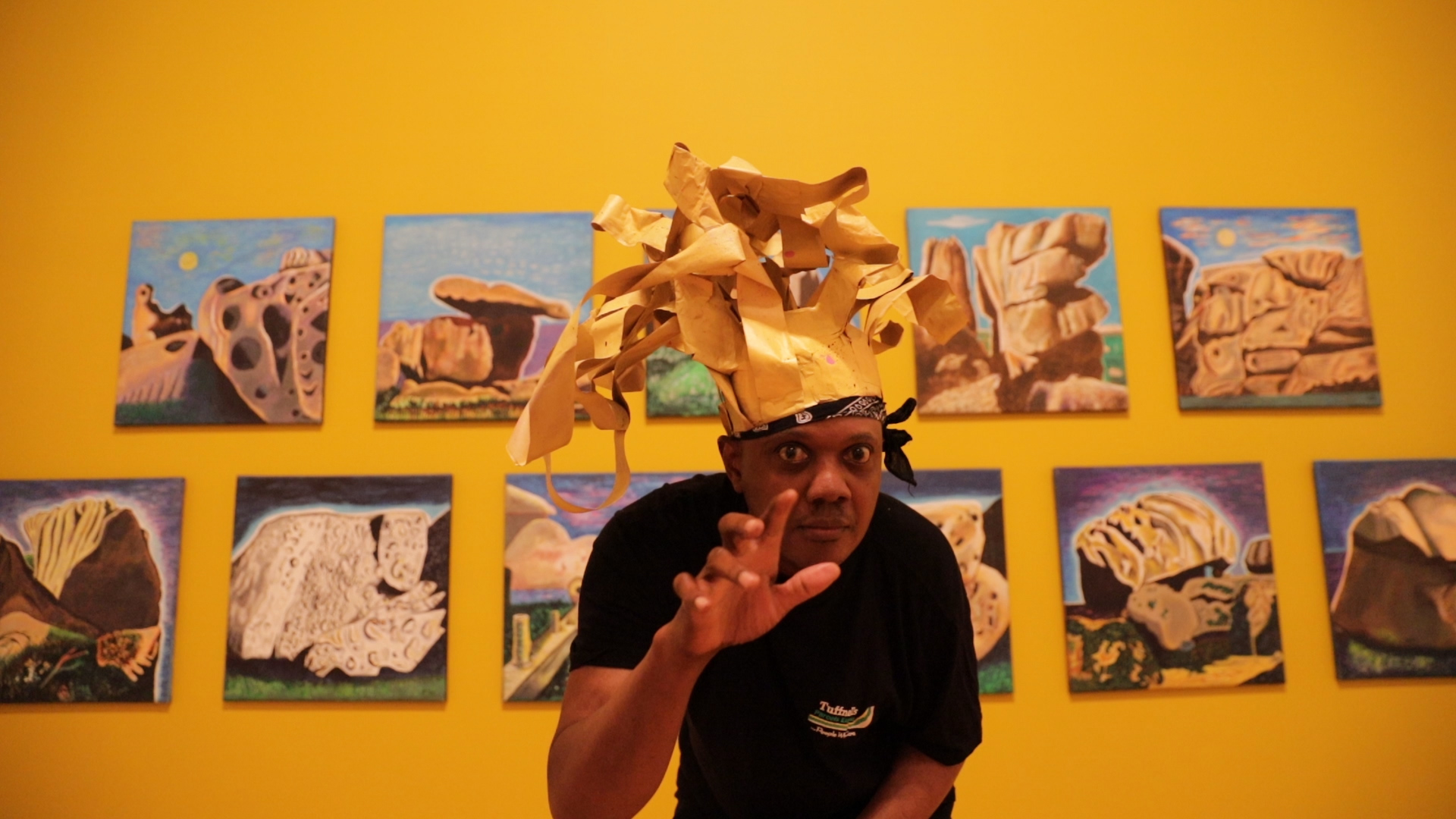 We invited a group of Headway dancers and artists to start exploring ideas relating to Eileen Agar’s work. The members who took part were Ken Hazeldine, Theresa Malcolm, Tirzah Mileham, Donna Rogers, Trevor Small and Sandra St Hilaire. Together, we decided that we wanted to work on a choreographed performance, that would incorporate costumes, movement and sound, which we wanted to film in the exhibition spaces and in front of backdrops we had created ourselves. All of these moving parts would be created simultaneously, meaning that artists were listening to the music as they created the hats, before wearing them and moving to the same piece of music. Each stage fed into the other, in a rich collage of creative expression. We approached Briony Campbell, an artist and filmmaker who could capture our work together and whose steady presence grounded the project. 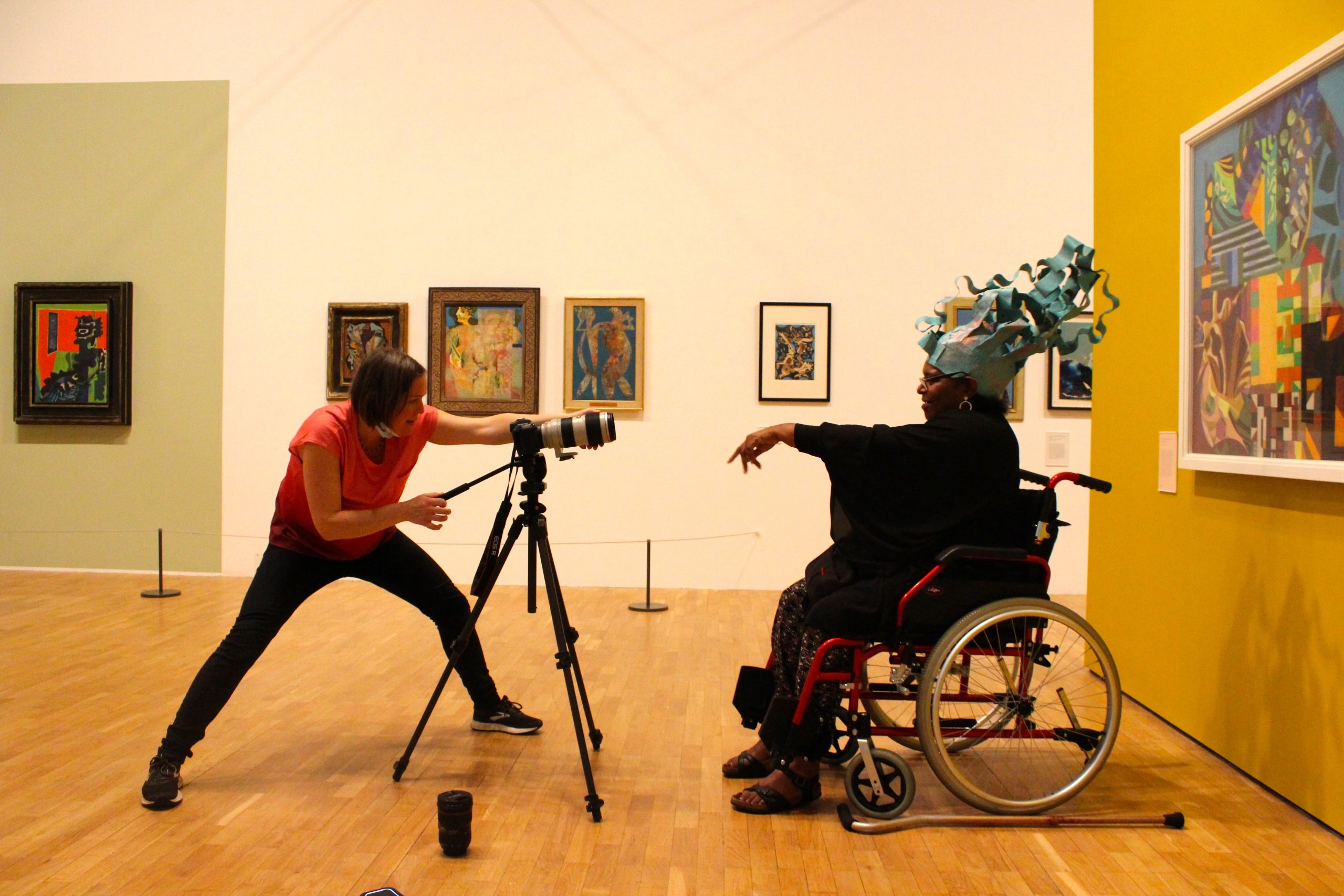 During an online workshop early in the process, we watched a Pathé film showing Eileen Agar parading down the street in her Hat for Eating Bouillabaisse, to the astonishment of passersby. We all know how perceived difference can cause people to stare, and we enjoyed the theatrical qualities of the piece, both in the manner of the hat’s design, and the performance of wearing and moving with it. We were also drawn to the oceanic aspects of Agar’s hats and sculptures; many incorporated seashells, grass and other organic materials that she had collected during visits to the beach, and we felt a spectrum of energy within the colours she worked with. 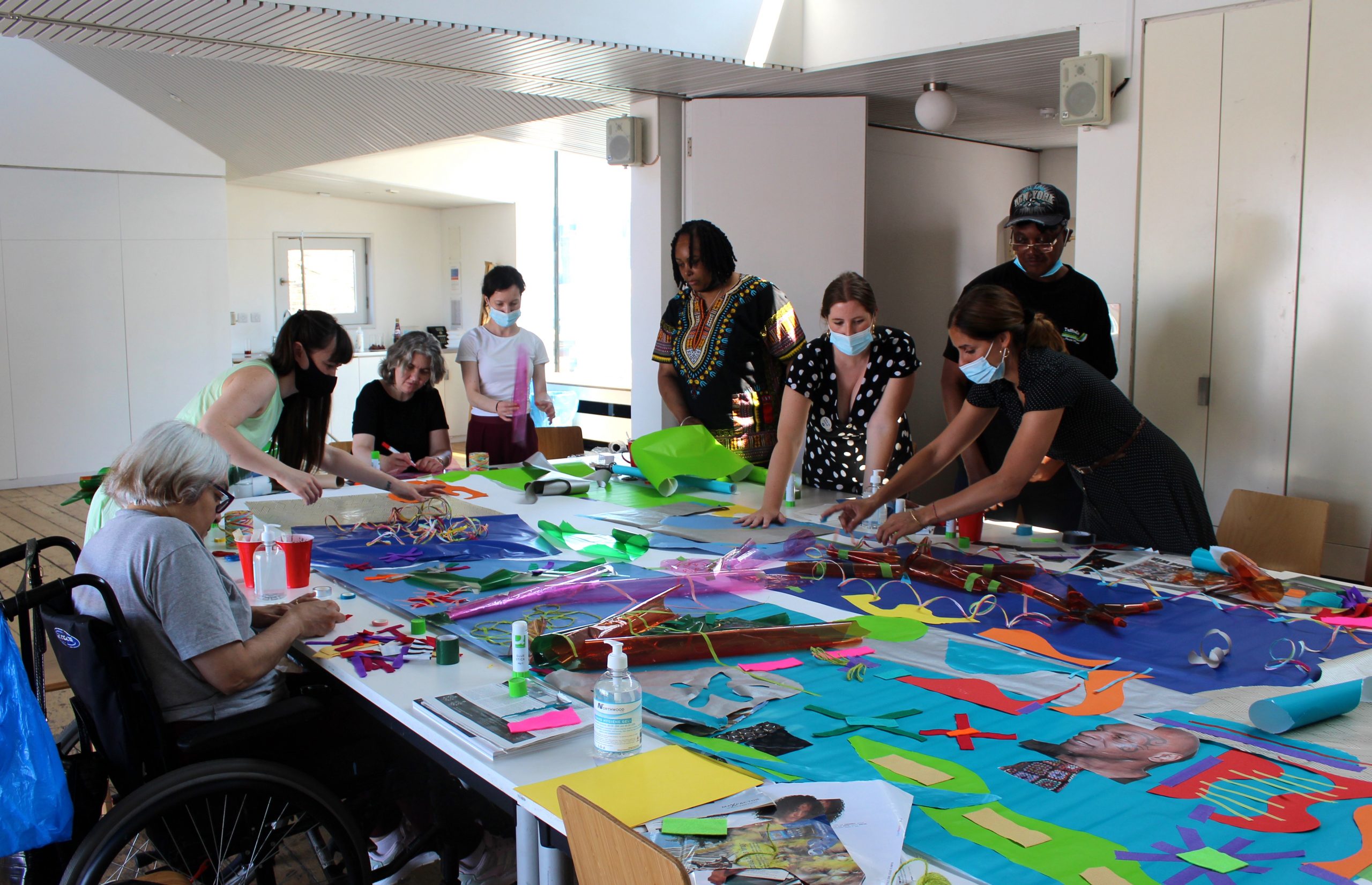 Back at the studio, the artists were also thinking about hats. Using gum tape to build structures, the pieces slowly began to resemble coral and seaweed, and the free movement within them began to inspire the movements in responding dance sessions. These sessions began by looking at Agar’s work and picking out shapes which inspired movement. The hats created then became an extension of this movement. The group also explored feelings and words associated with the work and used them as starting points for the performances. Some saw tranquility in the work whilst others a circus, and the organic and flexible process meant that each individual’s response was incorporated into the piece and could change over time. 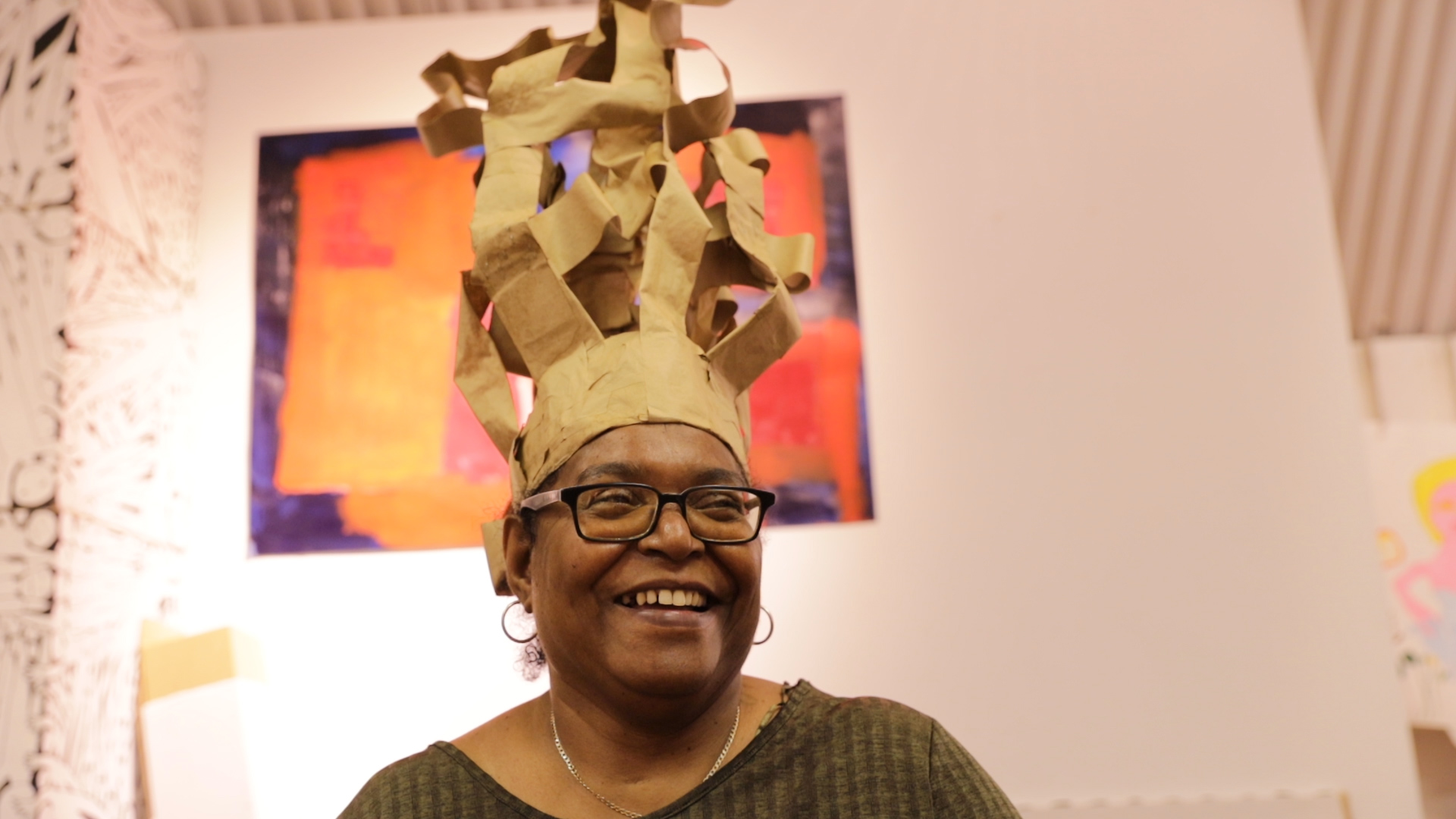 We decided to work with collage, a medium with scope for creating something collaborative on a large scale, and we invited artist Cherelle Sappleton to work with us and bring her own collage practice and her joyful style of facilitation. During online and in-person workshops, she encouraged the artists to think “big, bold and fearless” and together we created a piece which would form the backdrop of our performance. The energy during these workshops was expansive and full of laughter, as we worked instinctively as a group to cover a huge canvas, working with shapes and materials that recalled Agar’s paintings in the exhibition. 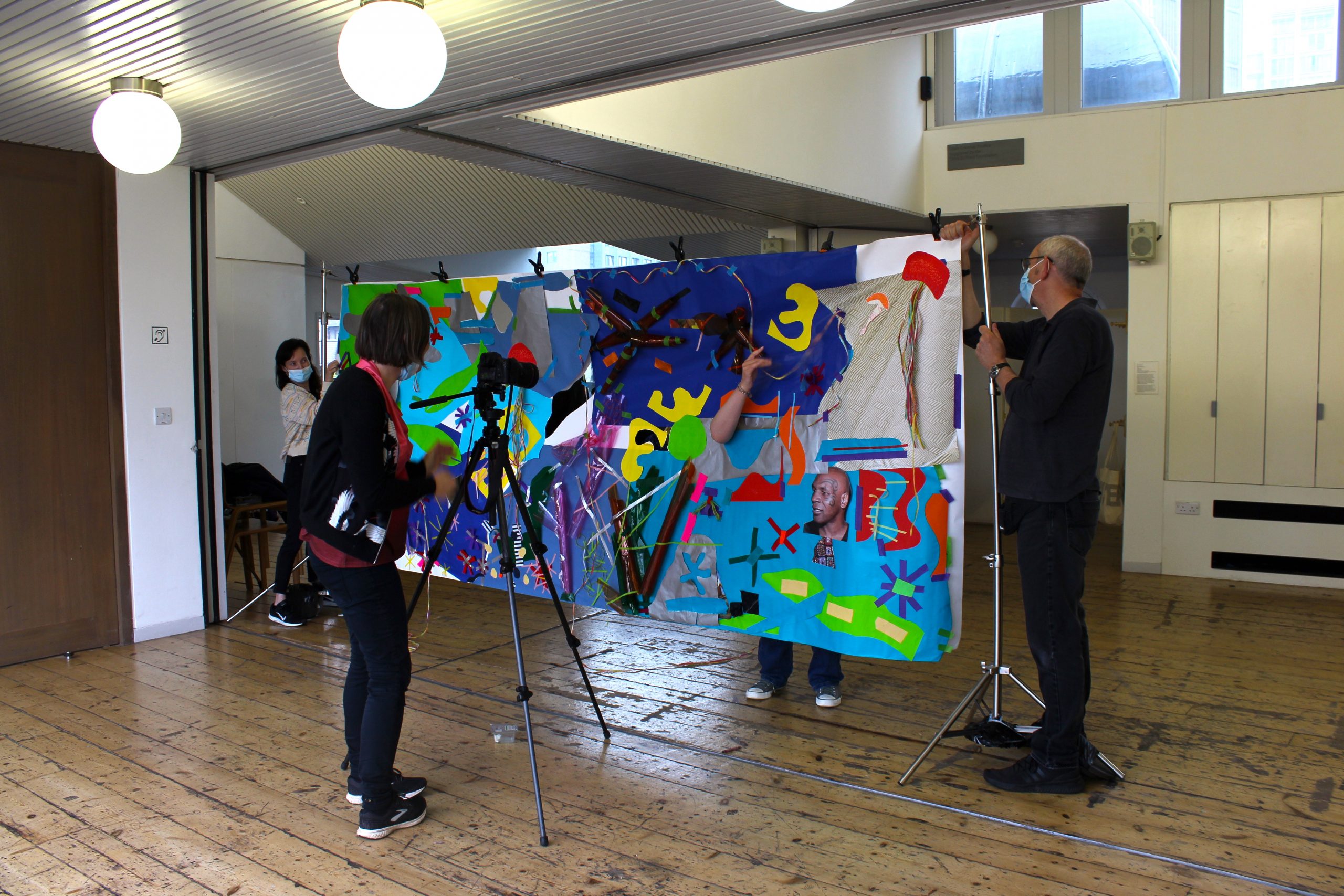 The soundtrack to the piece was created by two members, who looked at videos of Agar’s work and responded in different ways. Jovan Brown, who primarily uses online apps for music-making, started with a traditional seascape background before incorporating and layering loops of sound which spoke to the Agar’s more surrealist, collage-based work. The piece begins with a reflective and soft tone, and the added textures build to an agitated crescendo. At the same time, David Keen composed a poetic response to Agar’s work, which was incorporated into the audio piece, and subsequently edited to reflect the rhythm of his prose. 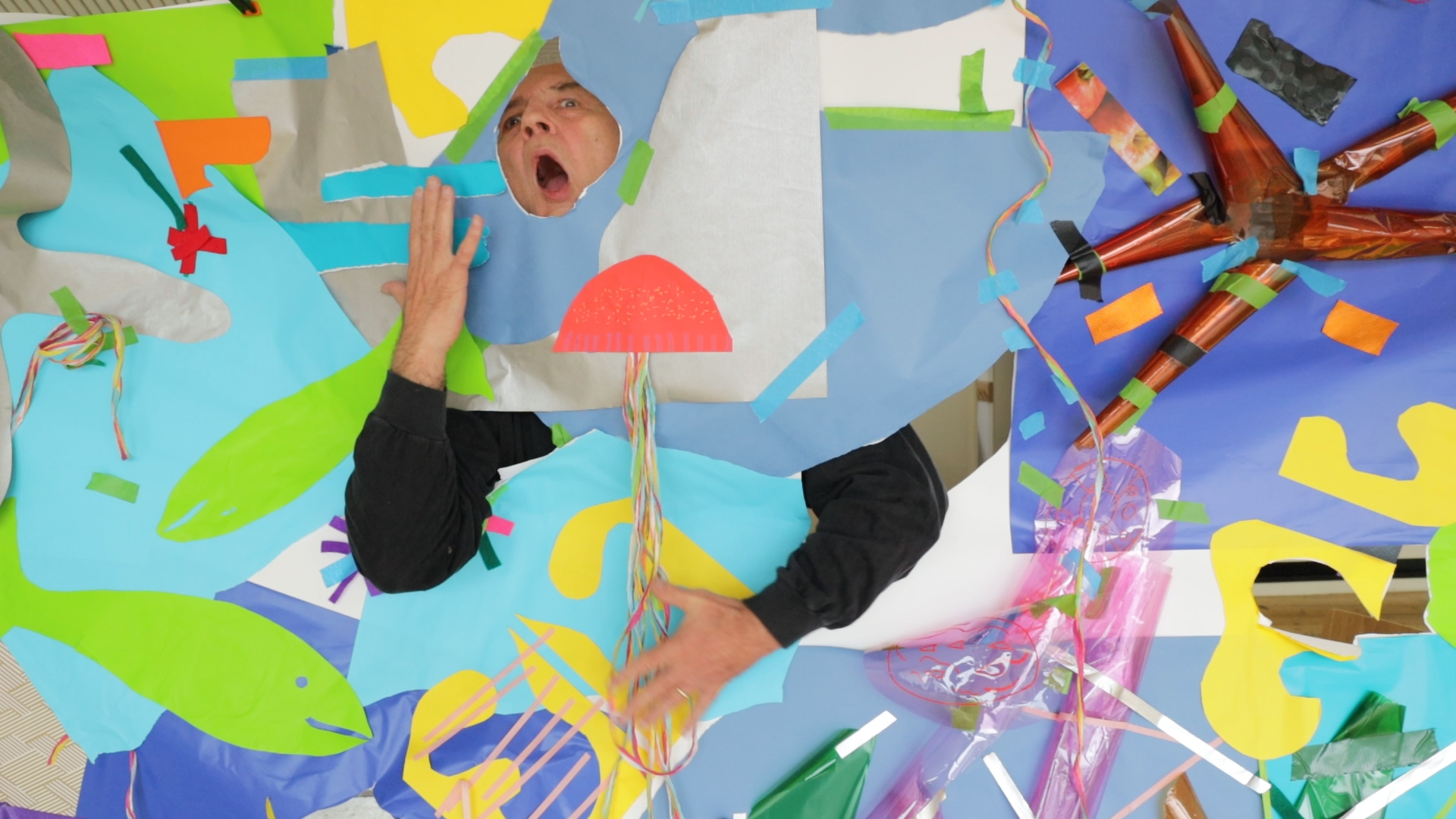 Keen’s poem repeats the line, ‘We see what we see’. This feels like an important reflection about difference in the ways we all see the world. In a physical sense, there are differences in the processing of shapes and colours that we experience as humans, which can alter dramatically after a brain injury. All our experiences are personal to us, and this is why it can be so rewarding to make work within a collective environment and to visit exhibitions as a group, where listening to one another’s perspectives can transform our own understanding. Agar made art that challenged boundaries; her work was playful, dramatic and uncontained. We wanted to embody that spirit in this project, and we hope you enjoy the film!