Sianne Ngai: On ‘cute’ as an aesthetic category 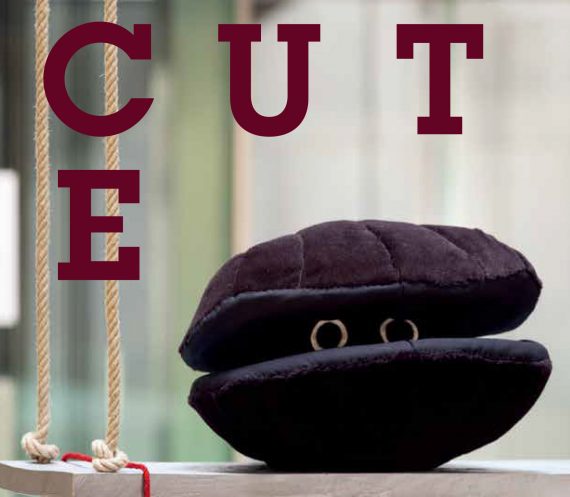 The Cute tracks the astonishing impact of a single aesthetic category on post-war and contemporary art, and on the vast range of cultural practices and discourses on which artists draw. From robots and cat videos to ice cream socials, The Cute explores the ramifications of an aesthetic ‘of’ or ‘about’ minorness – or what is perceived to be diminutive, subordinate, and above all, unthreatening – on the shifting forms and contents of art today. This anthology is the first of its kind to show how contemporary artists have worked on and transformed the cute, and in ways that not only complexify its meaning, but reshape their own artistic practices.

If you’re interested in learning more, be sure to get a copy of The Cute from our bookstore and book tickets for the discussion on  9 July 2022, when editor Sianne Ngai, will discuss the influence of cuteness with Professor Peter Osborne, artist and writer Erica Scourti, as well as author and researcher Larne Abse Gogarty, and editor and researcher Louis Hartnoll. 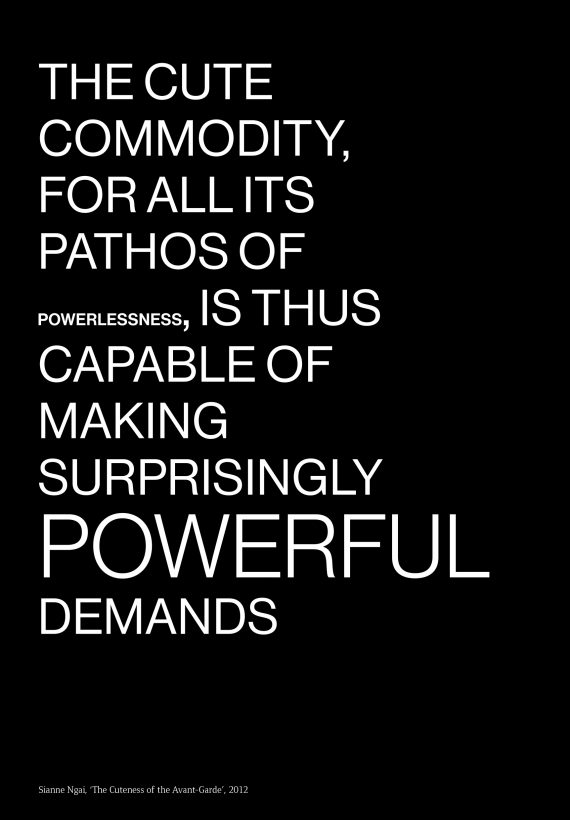 On ‘cute’ as an aesthetic category

From Sianne Ngai’s introduction to The Cute

[…] Because the cute is an everyday aesthetic, and not an institutionally codified artistic style, its manifestation in artistic activity is not securely fixed in space or time, or by nation or period, in the way that art-historical styles like Baroque and Art Deco are. But these very facts about the cute – its vernacular origin, or lack of a clearly established archive; its radical diffusiveness, or way of soaking into culture as a whole – help account for the astonishing variety of artistic movements in which it has made an imprint: from Pop Art to craft-based and street art, to abstraction and even Conceptualism. Artists of all types are attracted to the cute, one could say, for the way in which it makes our social totality porous; links between seemingly divergent activities, from robot design to the domestication of animals, suddenly come into relief when revealed as touched by its logic.

The Cute’s subject distinguishes it from – while also connecting it in new ways to – other surveys in the Documents of Contemporary Art series. Rather than taking up an institution, a mood, or a technique, The Cute explores the artistic ramifications of an aesthetic category: a perception of form, sutured by a specific affect or affects to a verbal evaluation. In contrast, however, to Beauty and The Sublime, whose subjects are aesthetic categories too – and, indeed, the elevated ones which prevail in academic histories and philosophies of art, tacitly organising our overall approach to art’s concept in accordance with their images – this survey zooms in on a philosophically and morally unprestigious one. Cute is in fact an aesthetic ‘of’ or ‘about’ minorness – or what is generally perceived to be diminutive, subordinate, trivial, and above all, unthreatening.

But is this aestheticisation of minorness itself truly minor, given the cute’s influence across radically diverse realms of social practice around the globe, from the automotive industry to poetry, packaged food to social media platforms, electoral politics to our perpetually shifting system of fine arts? How, and for what varying reasons, have artists ranging from Andy Warhol to Alake Shilling taken on the risk of using, as opposed to simply commenting on cuteness in their works? And what ultimately sets the cute apart from other, similarly ‘minor’ aesthetics or sensibilities – the sentimental, the pastoral, the naive, the ridiculous – with which it so often collaborates? The porousness that culture assumes in light of cuteness, as we notice it saturating everything from theories of biological evolution to the history of Mickey Mouse, makes this ordinary aesthetic a surprisingly useful tool for posing critical questions about society as whole. Artists in this survey accordingly mobilise the cute for insights into difference and belonging, into globalised relations of production and consumption, into adjacent aesthetics, and into art’s delimited agency in capitalist society. What makes the cute such a powerful index of not only these questions, but also the historical present in which we encounter them? 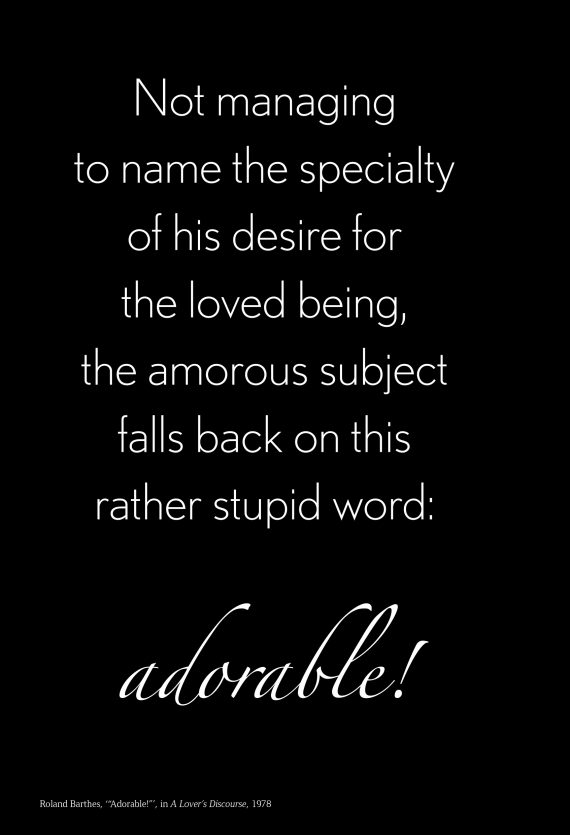 […] But first: what is an ‘aesthetic category’, exactly, and what sets it apart from a style, a manner, or any of the other concepts more traditionally utilised in – and tacitly shaping – the study of art? And how might cuteness, as surveyed through the texts in this book, help concretise our understanding of this utterly familiar, yet curiously undertheorised thing? I want to emphasise that here we are dealing with a double-sided entity: a registration of form – and by ‘form’ I mean: socially pre-shaped perception – affectively laminated to a verbal judgment triggered in response to that form. An aesthetic category thus connects a structured way of seeing to an equally structured way of speaking. It names the bond between a sensuous ‘look’ and a discursive evaluation, between an appearance and a speech act. Both sides of that relation are saturated with affect: the element that sutures them together into a single, spontaneous experience.

Because the two sides of any aesthetic category – form and judgment, perception and discourse – are non-identical, they can be related through disconnection, asymmetry or conflict. ‘Gimmick’, for example, is a negative evaluation of a form we perceive as impoverished but as nonetheless making outrageously extravagant claims to value. It thus names an aesthetic experience in which judgment and form are at odds, or in which one directly indicts the other. Zaniness saturates contemporary capitalist life as a performative style, but one rarely hears ‘zany’ used as an evaluation. The axiological charge of the judgment seems to have waned over time, such that the term is now almost entirely descriptive. Given that the zany hinges on a stressful blurring of the border separating work from play, what does the diminished strength of its cultural impact as judgment tell us about our increasing resignation, in an age of flexible accumulation, to work’s unremitting expansion into all other aspects of life? Conversely, ‘interesting’ is ubiquitous as an evaluation in both everyday and intellectual discourse, where its affective minimalism signals that one is registering a difference that has not yet been assigned a concept (but which could be, at some point). What the interesting ‘looks like’ as a style is, however, not as immediately obvious; while to the Conceptual Artists of the 1970s, its ‘same but somehow or indeterminately different’ ethos could be visualised with a series of binders filled with information, to a nineteenth-century writer like Henry James, the interesting looked like the novel, an infamously formless form featuring typical individuals in states of transition. In every case, however, the shifting relation between the formal and evaluative sides of an aesthetic category tells us something about its historical meaning.

If the zany is visually omnipresent but evaluatively recessed in contemporary capitalist culture, and the interesting is evaluatively strong but formally weak, the cute is striking for its symmetrical and increasing strength on both fronts. So on the one hand, cuteness refers to the ‘look’ of objects that come across to us as appealingly powerless – soft, malleable, diminutive – which is why its paradigmatic object is still the plush toy or Kuscheltier. (The German noun serves us better here, because in contrast to the comparatively cold-blooded ‘stuffed animal’, it contains an explicit reference to the act of snuggling.) On the other hand, ‘cute’ is also an aesthetic judgment. It is the thing we say to others, in a tellingly specific way often involving a cooing voice, a childish diction, and unconscious shrinking of one’s body, in spontaneous response to our perception of an object’s form as soft, malleable, diminutive, and so on. Directed as much if not more to an imaginary public of other subjects standing apart from the object itself, this affective response, ‘Cuuuuuuute!!’ – or as Roland Barthes prefers, ‘Adorable!’ – is also an evaluation: one that seems primarily positive but that is ultimately ambivalent. Calling something or someone ‘cute’ can be as much of a dismissal as a compliment.

Hence while all aesthetic categories conjoin our recognition of a relatively codified appearance to an equally conventional speech act, cuteness does so in a particularly revealing way: our judgment ends up mimicking the appearance it evaluates, collapsing the distance between object and subject in an instantiation of the ‘immediacy’ we seek in the aesthetic overall. If, as I and others have argued, cuteness enables consumers to enjoy a certain fantasy of ourselves as having power over domestic commodities that, in reality, are much more in control of us, we find this dynamic allegorised in the surprising capacity of the subordinate object to soften and deform the language of its evaluator, reshaping it in conformity to its malleable form. […]