This Space of Mine… with Antony Gormley 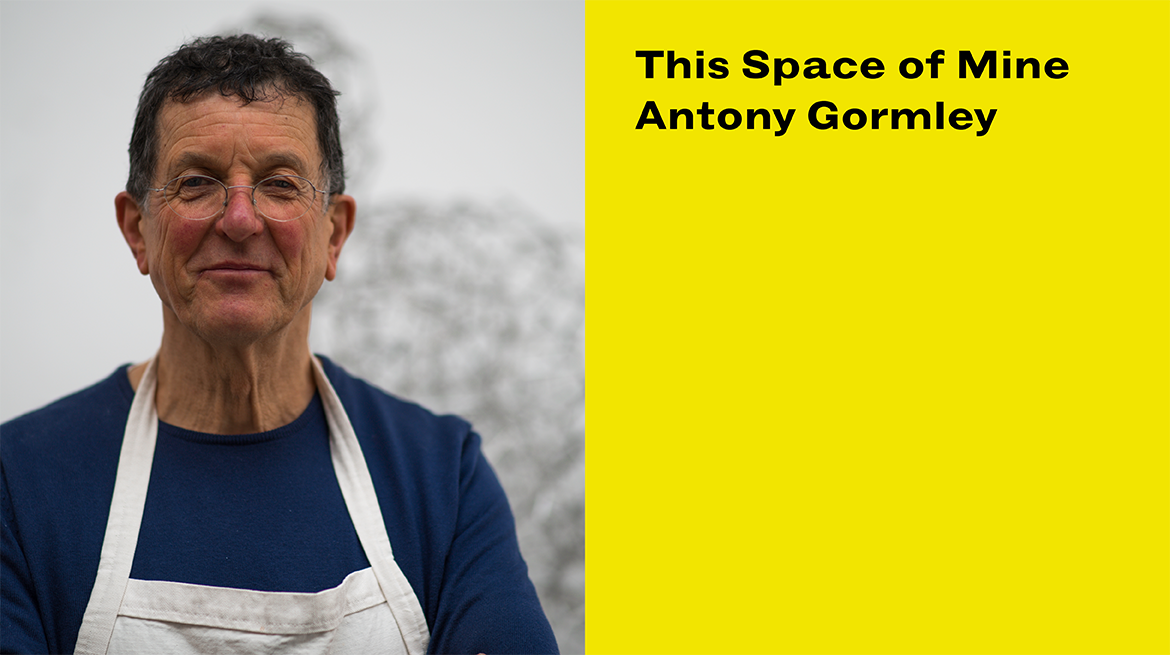 Here in this second interview, we speak with artist Antony Gormley who is widely acclaimed for his sculptures, installations and public artworks that investigate the relationship of the human body to space. His work has developed since the 1960s through a critical engagement with both his own body and those of others in a way that confronts fundamental questions of where human beings stand in relation to nature and the cosmos.

Get sneak peek into Antony’s bespoke drawing studio and share your own creative space with us using #ThisSpaceOfMine. To discover the studios of more than 80 artists from around the world, book your tickets now for A Century of the Artist’s Studio: 1920-2020.

People come in and out of here, but actually the studio is my kind of playground. It’s my laboratory. It’s my place where I think and feel and make. And I suppose drawing for me is the freest part of what I do. I come here to begin the process of materialising things that aren’t yet very clear. I always have a little notebook in the back of my pocket which is filled with first ideas.

When designing my studio, I said to the architect, David Chipperfield, ‘I need silence, light, and space’. And that’s what he gave me. We also needed the ability to put five tonnes down anywhere. And then we needed to be able to drive a truck into the main studio. So the first thing was finding a place where we could build such a building, where there could be a courtyard or an open space, where you could drive a truck into a big external space and then into the studio itself. We also had to think about which direction the building faced, and it was important that it faced south. So this building now runs on an east west axis and faces south into a courtyard where we can park three or four articulated lorries and load objects of some weight.

How has your studio/creative space evolved over time?

So studios are, for me, in a way the garden out of which things come and grow. In the beginning of my career, I borrowed other people’s studios for many years, after which I built my first space at the end of the garden in Peckham. A bricklayer, Big Sid, made the walls and then we got all the glass from old greenhouses in Hartfordshire. And we nobbled together this first place, but it had the same three things: it had the space, the light and the silence.

And then I went on to get Eric Perry to build a space in an old second hand tyre place in Peckham, but then that got too small. I had to really think about what I needed because by that time, I had more than one assistant and I just needed a place, which in a way was a declaration of where I wanted to go, a place that could accommodate, in a way, my hope that the work would grow, both in scale, but also in reach.

All that aside, the first studio is, in a sense, inside one’s mind or imagination. You have to catch things quick, those inspirational moments – you’ve got to get it down somehow. There’s always an urgency. There’s an urgency of simply thinking, ‘I might not be here tomorrow’. But there’s also the urgency of translating something that is always fugitive, that is always kind of fragile and wobbling and you want to still it. So suppose there is still some rushing, I have to admit, but like to think I’ve matured and that I don’t rush anymore, however there’s still a degree of impatience; you’ve got to be quicker than the evaporation. You can’t let the fish slip the hook. Time is just so important. I’m always quoting Brancusi: ‘It’s easy to make art. What is difficult is to create the conditions out of which art can arise.’

That’s why I carry around little notebooks, which help me capture those sort of early scratchings. And then slowly, with other people’s collaboration, it comes together in my studio. Now there are about 30 of us that work here, so it’s really a collective, collaborative, creative community that occupies this place.

I’ve just done a little collaboration with Colm Tóibín called Weather, and he just said to me, ‘you have a great big studio, but I can work anywhere, you know’, and he pointed to a dark corner and said, ‘you could sit me down there with a pencil and I would be perfectly happy; I can work anywhere’. Well, on one level that’s also true for me, you know, me and my little notebook. I’m very happy working anywhere. I will sketch on the train, on the plane, in the boat. In the car even sometimes. You’ve always got to be fishing or in a way attentive to what’s coming up in your conscious or unconscious mind.

Maybe one of the most unusual places I’ve used as a studio was the Xiangshan Village, Huadu Province, Guangzhou. There I had 360 assistants and 150 people helping prepare the clay for the work Asian Field. That wasn’t so much a formal studio, but actually a secondary school. We used four basketball courts and the courtyard of an ancestral temple, which was just the most incredible experience of collaborative working.

I’ve also made a lot of art in an old stable in High Nibthwaite at the lower end of Lake Coniston in the Lake District. I’ve used a fairy house in Argyll in western Scotland. My studios in India were also very varied. I’ve had a little planter’s house just south of Darjeeling in the eastern Himalayas. I had a nice hut in Goa for a while. I also worked at a Theosophical Society outside Chennai, and on the eastern coast of Greece one summer, I worked on the beach!

But the fact remains that the studio has become an essential crucible for making works that are not provisional. I think that’s the difference between all of these other studios. These are often places where I make temporary works or sketches that are on the way to being something more serious and permanent. My London studio, though, is about making things that last.

What are the elements that you require in a space to access your imagination?

They vary quite a bit. I keep a pot from Colima, Mexico and a voodoo doll that I bought somewhere on auction. There’s also a headdress from the Amazon and a life mask of William Blake. Somewhere I’ve also got a trolley from an old operating theatre in Camberwell Hospital.

But perhaps the most beautiful object of all, which travels with me, is a bees’ nest that escaped from my brother’s beehive. It’s one of the most beautiful architectural structures where suddenly the bees were liberated from their orthogonal frames… it’s very inspiring to me.

What one object in your studio would you not be able to live without?

I have this work that I made, a Taoist symbol of the world. It’s a disk with a void in the middle and it’s about the relationship of space at large to this enclosed space that lies at the middle. They’re normally made out of jade, but this is made out of bread which has moulded, but as a result, it looks like a sort of limestone. It is a kind of Talisman. It makes me think: can you make art that relates to space at large, but also to human survival? Can you make an object that holds an aspiration for balance, continuity, and survival in recognition of our dependency on the wider world?

Maybe doesn’t carry any of those things, but for me, it’s a reminder.