This Space of Mine… with Jasmin Bhanji

Category: This Space of Mine — Published: 25 May 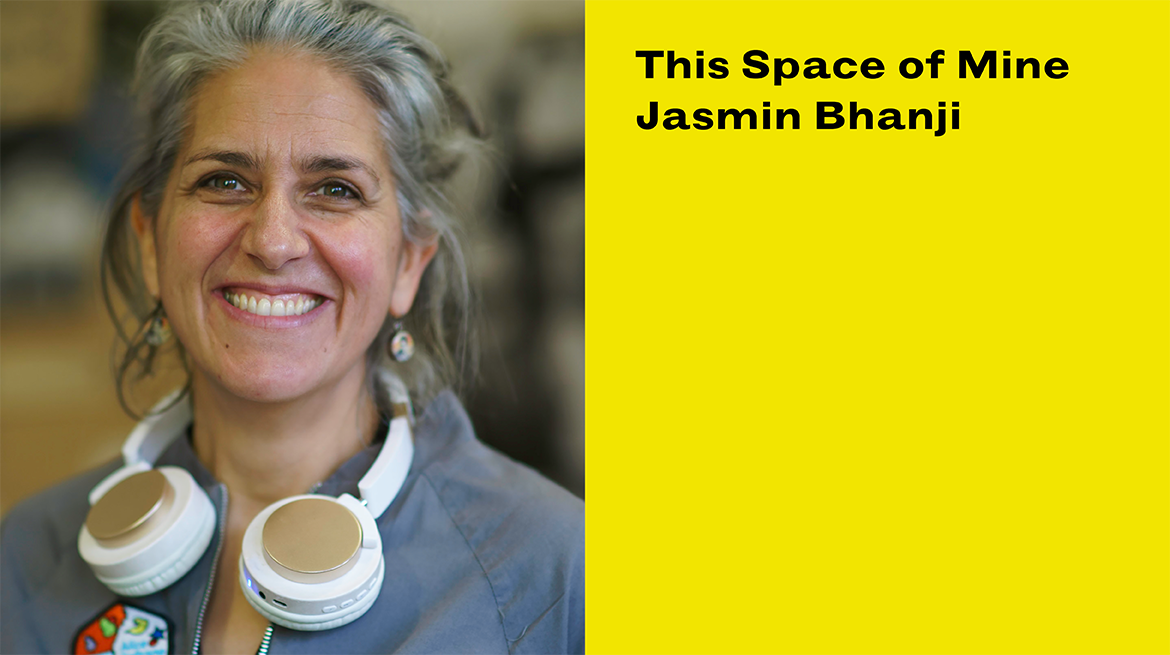 Here we speak with multimedia artist and educator, Jasmin Bhanji, who generously welcomed us into her communal studio-cum-classroom. We were surrounded by the sounds of school bells and students, offering the perfect backdrop to Jasmin’s ever-inspiring collection of found objects and works-in-progress.

Go behind-the-scenes with Jasmin and book your tickets for A Century of the Artist’s Studio: 1920-2020, offering a glimpse into more than 80 creatives’ studios from around the world. #ThisSpaceOfMine.

My studio is in a school and was set up by Cubitt Studios. They offer various studios within community spaces, including in care homes, and this particular studio has been set up in a secondary school in Islington, North London. The head teacher here and Cubitt got together and had this brilliant idea of converting this quite large space into four spaces for practitioners. And all of the participants have to be interested or committed to both arts and education, meaning each of their practices are somehow involved with education. I think what’s amazing for this space is that we get to take these kids out of their normal classes and they’re able have an experience with professional artists. It’s a very radical solution to both the squeeze on affordable artists’ spaces and it’s a really beautiful response to the squeeze on arts education. It’s a perfect solution for both.

Because of Covid, the studio had to shut down because the school was shut down. So it was really difficult to be away from this space. As soon as I was able, I was back! But the other practitioners haven’t come back; they’ve had other work or perhaps had to find other solutions during that time. But I’ve managed to come back in, so I’m here on my own most of the time. It’s bit like being inside the mouth of a whale. There’s this amazing system that looks after and educates all these kids and you hear that all around you. The pips will go [off] and you’ll hear this sudden roar of teenagers. I really enjoy that kind of energy around me. It doesn’t suit everyone, but it really suits me.

How has your creative space evolved over time?

I’ve had lots of experience in different studio spaces because I was originally a ceramicist. Ceramic spaces are generally shared spaces because of all the expensive technical equipment involved. So you tend to get artists grouped together, especially here in London. So I started off in collective studios and then since my Master’s degree, I’ve been here really, and I set this studio up really consciously thinking about the studio and what it means and how it functions in the creative life of artists. I looked at studios from lots of different, mostly modern, artists (rather than contemporary artists) and kind of stole from them. So you’ll see throughout my space lots of [pictures of] magpies, because they kind of act as my emblem. I see that as me going around stealing everyone’s ideas! Sometimes a magpie actually comes and visits me which feels perfect. I kind of consciously created a space that I felt was using their best ideas about what space should be, which means I’ve also got things around me that I never use, like oil paints, but it’s all part of the mystique of the studio.

I’ve also started suspending a lot of things in my space because I use that as a tool for dynamism. As soon as you suspend something, you’re putting potential into them; you’re putting movement and the potential to fall. Then things start to make connections. There’s a shape on the floor that’s about connecting different ideas. Ideas are constantly crashing into each other because of the way I’ve set up the space with things hanging things moving. And there’s quite a lot of instructions around. When I think I’ve hit upon something important, like a way of working or a way of thinking, I’ll write it down as an instruction and that gets put into the space as well. If I ever forget what I’m meant to be doing, I can look around and solutions will quite literally appear because I’ve done all this layering.

I think one of the things that artists are good at is paying attention. That’s our job, really, is to pay really close attention. I’ll go see another artists work and look for a hook or something. It’s like an expanded form of copying. It’s like I copy them, but I’m looking for particular things or particular ideas or hooks. That’s why I’ve got hooks in my space. The thing that draws you into their work, what is it and how is it working? And then I go back into the space and I try and work it out. How is it working? What’s it doing? And work out hopefully enough to then go back to whoever’s interested in working with that particular artist in that space.

I find it very difficult to work anywhere else, really. I mean, this is quite an unusual environment, right? This is probably the most unusual environment I’ve worked in, being inside a school like this. My other studios have been pretty standard, and I tried to work at home during the pandemic, which was impossible. I think some artists can totally work at the kitchen table and hats off to them! But my domestic space is so busy; I’ve got three kids, two cats, a husband and a mom lives downstairs, so I need to not be there in order to think. So this is very precious. It’s kind of like my external brain. It’s my thinking space and without it, I did go a little bit crackers over Covid. I found it really hard. I just wanted to be back here, to just lie on the floor and put my face on the cold concrete.

What are the elements that you require in your space to access the imagination?

I just surround myself with images and object. You just have to be excited about your space, to create a kind of joy in it. Things are constantly coming in and out and being pinned up and being hung up so it doesn’t clutter up my head, but the space. It’s out there for me to look at, an externalised space. And every single thing is here for a reason.

What one object from your studio would you not be able to live without?

I feel you could take it all away. That would probably a good thing! All I need is the space. Bruce Nauman said something like: ‘you’re the artist. So whatever you do in the space is art.’

That being said, I also get obsessed with albums. I have to have my music and my headphones. So I think if you had to take everything away, just don’t take away my music.