This Space of Mine… with Joe Moran

Category: This Space of Mine — Published: 1 Jun 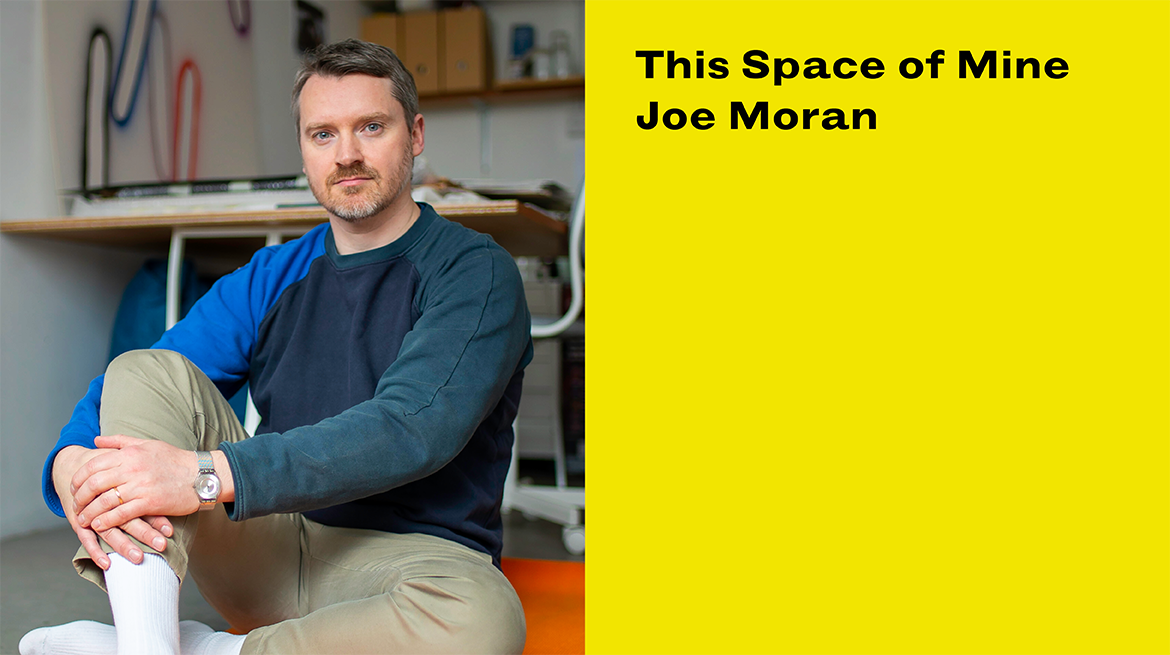 In the final interview of the series, we speak with Joe Moran whose wide-ranging practice incorporating performance, critical writing, drawing, curation and advocacy projects. His work centres the body and embodied presence as a site of complex subjectivities and political unrest, with queering frequently deployed as its principal critical strategy.

Go behind the scenes with Joe on our YouTube channel and share your own making space with us using #ThisSpaceOfMine. To discover the studios of more than 80 artists from around the world, book your tickets now for A Century of the Artist’s Studio: 1920-2020.

I’m based in London and my practice allows me to work in quite a few different places. I’m an artist and a choreographer, so I work in a lot of dance studios, but then I also work in the visual arts a great deal. My practice kind of expands into drawing and spray paint work, so I also have a more traditional artist’s studio.

Where I’m working with really depends on the project and the work that I’m making. I do a lot of work in my studio on my own, but of course, making dance is very collaborative, and I will often be in a room with lots of dancers and we’ll be working all together. So it’s a real spectrum from solitude, or individual practice, to very open collaborative work.

How has your creative space/studio evolved over time?

The space where I’ve worked has changed quite a lot over the last couple of years in particular. Historically I’ve just been working in dance studios, or kind of ad hoc studio spaces, but in the last few years, I‘ve been trying to experiment with much more of a hybrid space. So my studio at the moment is a kind of experiment which has a dance floor and that can be for movement research or quite small scale, movement work. Then at the same time, I’m able to do more of the messy work, like spray paint work or drawing. They can be quite difficult to coexist because dance or movement needs primarily a kind of warm, clean and not too hard a floor, and then that is slightly at odds with my spray paint fumes. But I’m trying to bring them together and that is how the space is evolving.

I’ve worked in lots of different spaces and in London, especially, it’s common to see artists reappropriating disused spaces. Recently I was introduced to a collector who bought a new flat, and for various planning reasons, wasn’t going to be able to use it for the first year. So it was a kind of gutted, disused flat and she wanted artists to use it. So I had a huge space for about six months, but it was freezing!

I’ve also worked a lot with performance in gallery and visual arts contexts. Once at a small gallery, we were preparing on the evening of an opening and they had set up a curtain in the office. We thought, wow, that’s so kind of them, they’ve set up this kind of private space for us that’s separate from their office. But then we realised, that this ‘warm up space’ was actually the corridor to the loo, and how they separated their office. So I’ve also had a toilet corridor as a studio.

What are the elements that you require in your space your studio to access your imagination?

There are different needs for different parts of my practice. For dance, those kind of core conditions are a clean, warm, dry space with a suitable floor. And when you’re working in the visual arts, you encounter a lot of poured concrete in gallery spaces. So that can be an issue.

But then, with my spray paint practice, for example it’s really important to have good ventilation and space where it’s okay to get messy.

It might sound clichéd, but my practice is really grounded in the body and somatic experience. There’s loads of discourse in in dance theory around the body as archive, but I think that’s probably the central need for me. I’m always with my body so it’s okay.

What one object in your studio would you not be able to live without?

Well, two things, probably: quite simply, I need to have just a feeling of space to think. And for me that’s often quiet; I’m not someone who works with music. Normally I find it gets in the way of my thinking. The other thing is the body.  All of my work arises from a choreographic inquiry, and my drawing or spray paint work I think of as expanded choreography, rather than necessarily visual art.