This Space of Mine… with Phoebe Boswell 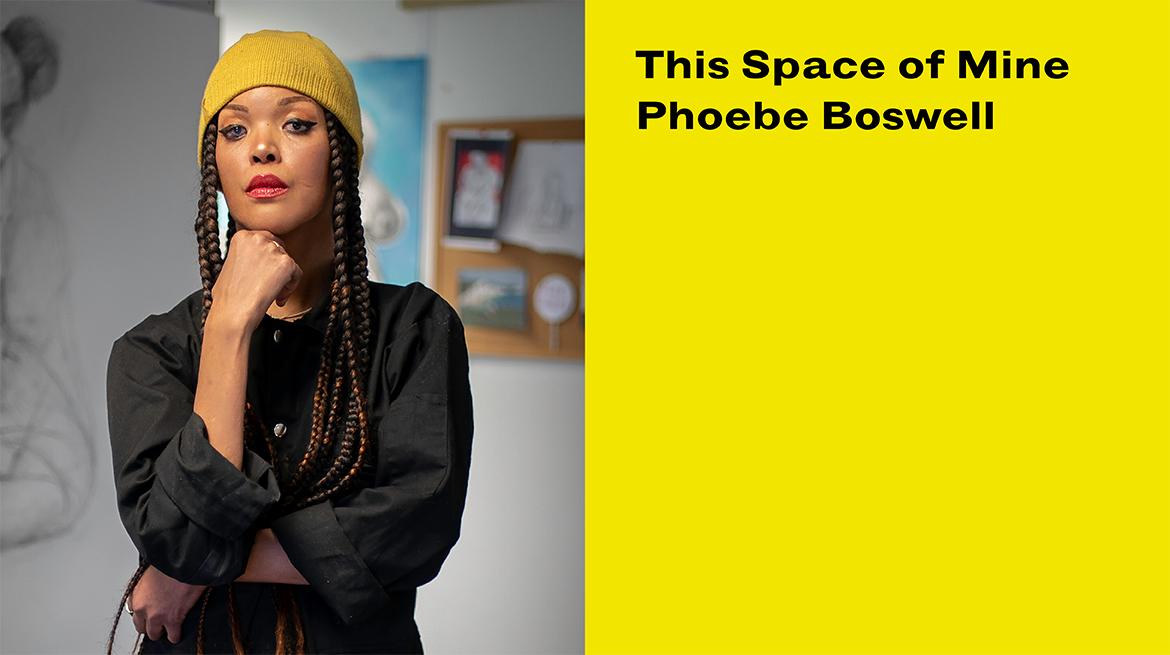 In this first interview, we speak with Phoebe Boswell, an artist whose work layers drawing, animation, sound, video and interactivity. She describes her practice as a kind of navigation, tracing the ‘upheavals, dualities, geographies, kinships and silences’ of migration.

In her cozy Bow Arts studio, we spoke with Phoebe about the significance of creative space, about what it means to belong and be free. As our Writer in Residence for 2022, we also spoke about her ongoing research into diasporic stories, colonial histories and bodies of water.

Go behind the scenes with Phoebe on our YouTube channel and share your own making space with us using #ThisSpaceOfMine. To discover the studios of more than 80 artists from around the world, book your tickets now for A Century of the Artist’s Studio: 1920-2020.

I make work in South East London, near Canada Water in How Arts Canada Street Studios. I have two studios joined together in a building that was, I think, repurposed as studios; it used to be a disused office block.

I moved here after I came back from a residency in Rome (before that I had been at Somerset House) and I needed something really quick. And I found this place, which is very near my home. Above all, it’s warm, and I needed to do this very intense project very quickly. So I moved in and soon after that, the pandemic happened. I’ve been here ever since.

How has your studio space evolved over time?

My studio has grown since I moved in. I first had [one half] of this space, and then when the person moved out next door, I extended so I could have the whole studio, because my work is very multi-layered. It’s nice to have multiple spaces so that, on the one side, I focus on drawing, and on the other side, it’s more of a kind of more holistic space where I can do animation work and research, where I can read and lay down.

I’ve had many Studios in London over the course of all of these years. It’s not easy for me to stay in one place for that long. So I kind of oscillate between spaces, between being in my studio and my home where I work with my laptop. I try not to bring my laptop here so I can differentiate between the place where I need to focus on drawing and my more physical practice. It obviously means that I don’t have a very good boundary between work life and home life, but for me at the moment, it’s still better to keep those two types of working separate.

I also think my walk talk to the studio is part of the ‘studio day’, the creative day. I usually sit by the water first and then I come in for coffee.

Oftentimes, an extension of the studio is the place where I’m going to install the work. A lot of my decision making happens on-site. I’m always very conscious that I won’t really know how to feel in a space until I’m in it. So I see the museum or the exhibition space as an extension of a process; it’s not only a place to exhibit, but it’s a place to grow the work.

I also feel like travel and moving between borders, is a kind of extension of the studio as well, in a way. I do not carry around a notebook, but my phone and my laptop are very much part of my practice. The notes app in my phone is where I will jot down a lot and take millions of screengrabs and photographs. The photos become a kind of sidekick to my practice.

That being said, I’ve always wanted to be that kind of romantic artist who’s committed to a sketchbook, but I don’t really do small studies. If the work is intended to be small, it will be small from the beginning. If it’s intended to be big, I like the challenge of that. I like the element of risk that comes with a larger work. And so I don’t tend to map out on a small scale.

What are the elements that you require in a space to access your imagination?

Well, a lot of my work involves other people. It’s rare that others come to my studio, but it usually involves multiple conversations with people, or people sending me stuff online or via WhatsApp. There’s alway a kind of dialogue that goes on.

I also always draw to music. I listen to different types of things if I’m animating because it’s very labour intensive, it’s very repetitive. I like to get into things that are more narrative based. So I’ll listen to an audio book or I’ll listen to musicals and sing along. To give an example – I’ve just been in New Orleans doing an installation where I had to be on a ladder the whole time. And I’m very, very scared of heights. So I had to listen to music and sing in the museum the whole time because it was the only way to get my mind off being terrified. The museum staff just had to bear it for like six weeks!

In my studio, I also need my animation desk, which was gifted to me by Uli Meyer when these dinosaur desks were going out of circulation (everyone works more digitally nowadays). So that moves around with me and my studio will always be based on whether it can fit that monster. I also like to have books of black scholarship in my studio. I like getting buoyed by the words of black women. Then I always have my five B pencils – I mainly use Faber-Castell, but I’m not super religious about that.

What one object from your studio would you not be able to live without?

First I couldn’t live without my animation desk. But also warmth. I never want to be in another cold studio. I think a lot of London studios are really cold. I spend a lot of time here, so I want to be able to relax. I would never want to get a bed in here because I think that would be too much, but I’m definitely somebody who can lay down and rest and read and think.

Then of course I couldn’t live without my tools. You always need to have them at hand and be respectful to them. I will always remember my first art teacher: he was this Scottish man called Mr. Murray. And he said, ‘you have to respect your pencils’. If he caught you not respecting your pencil, he’ll like bounce you around the block like you’ve never been bounced before. So whenever I’m disrespecting my pencils I think about that.