Join long-time friends – the renowned Spanish novelist Enrique Vila-Matas and artist Dominique Gonzalez-Foerster – for a conversation celebrating the first in a year of displays from ”la Caixa” Collection of Contemporary Art.

Tracing narratives between contemporary art and literature, from ghostly apparitions to the ambiguity of experience, the two will discuss the newly opened Cabinet d’amateur display of works selected by the author. Gonzalez-Foerster’s installation Petite (2001), a meditation on the childhood imagination, forms a centrepiece of the show.

The conversation will be primarily in French with English interpretation. 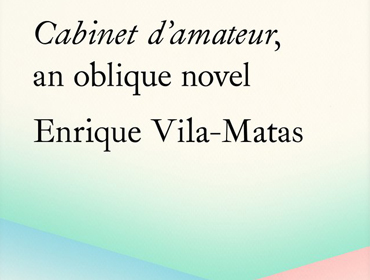 Following the talk, Enrique Vila-Matas will be signing copies of the first of four special publications accompanying the ”la Caixa” Collection of Contemporary Art display.

Enrique Vila-Matas (b. Spain, 1948 and lives and works in Barcelona) the internationally-acclaimed Spanish novelist has selected six works creating a narrative around place and identity including major works by Spanish and international figures Miguel Barceló,  Andreas Gursky and Gerhard Richter.

Vila-Matas is widely considered to be one of Spain’s most important contemporary novelists. His books, often described as metafiction, include Because She Never Asked, 2015 (originally written for Sophie Calle), The Illogic of Kassel, 2014, Dublinesque, 2010, Never Any End to Paris,  2003 and Bartleby & Co, 2000. He published Mac y su contratiempo (Mac and His Problem) in Spain, 2017, which will be released in the UK on 6 June 2019 by Harville Secker.

Dominique Gonzalez-Foerster (b. France, 1965 lives and works in Paris and Rio de Janeiro). The contemporary artist is known for her video projections, photographs, and spatial installations which are inspired by modernist architecture, critical theory, film, art history as well as by the her own apartments. With a background in landscape and design, her installations combine sound, images, light and furniture in spaces that investigate the notions of staging and theatricality as well as questions of the urban life.