This conversation explores how queerness has impacted on and informed the art world – from artistic practice to critical discourse – considered from the perspective of the artist.

Shifted from a derogatory slur, to a badge of honour, artists who identify their practices as ‘queer’ today call forth utopian and dystopian alternatives to the ordinary, adopt outlaw stances, embrace criminality and opacity, and forge unprecedented kinships, relationships, loves, and communities.

Launching Queer, the latest book in the Documents of Contemporary Art series published by the Whitechapel Gallery and The MIT Press, the discussion is led by David J Getsy (The School of the Art Institute of Chicago) and includes artists Emily Roysdon and Prem Sahib.

Documents of Contemporary Art are published by the Whitechapel Gallery and MIT press. See the full series of books here.

David J. Getsy is Goldabelle McComb Finn Distinguished Professor of Art History at the School of the Art Institute of Chicago. His books include Abstract Bodies: Sixties Sculpture in the Expanded Field of Gender, Scott Burton: Collected Writings on Art and Performance, and Rodin: Sex and the Making of Modern Sculpture.

In 2012 Roysdon was a finalist for the Future Generation Art Prize, exhibiting in Kiev and the Venice Biennale. Her work is in the public collection of the Museum of Modern Art, New York and Moderna Museet, Stockholm, among others. She completed the Whitney Museum Independent Study Program in 2001 and an Interdisciplinary MFA at UCLA in 2006, and is a Professor of Art at Konstfack in Stockholm, Sweden.

Prem Sahib was born in London in 1982. He lives and works in London. 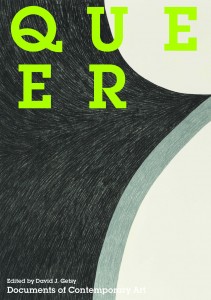