In conversation with Briony Fer

Concerned with questions of craftsmanship, modernity, design and the vernacular, Portuguese artist Leonor Antunes is joined by art historian Briony Fer to discuss her work, on the occasion of her new commission the frisson of the togetherness.

Antunes work is informed by traditional crafts and the histories of female figures within art, design and architectural history. Together they consider critical questions in Antunes practice, alongside the historical references made to figures such as Mary Martin (1907–69) and Brazilian artist Lucia Nogueira (1950–98). 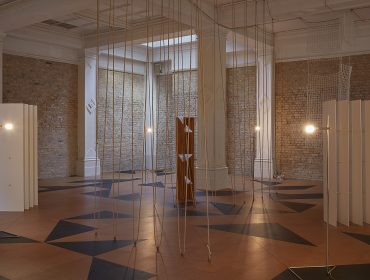 Leonor Antunes: the frisson of the togetherness

Straight lines and flat planes morph into looping and twisting volumes and sculptural reliefs in the new commission by Leonor Antunes.