The Beatles disbanded in 1969 after a tumultuous summer, dashing all hopes of a North African tour. Fascinated with this story, artist Michael  Rakowitz revisits his 2010 project ‘The Breakup’, in conversation with historian Mark Lewisohn, world leading authority on the Beatles, and moderated by writer Arsalan Mohammad. The  discussion addresses the intricacies of the rock bands’ collapse and the allegorical echoes between this event and the once dreamed Pan-Arab ideal.

Michael Rakowitz lives and works in Chicago. He is Professor at Chicago’s Northwestern University. His work has been exhibited worldwide including dOCUMENTA (13), P.S.1 MoMA, MassMOCA, Castello di Rivoli, the 16th Biennale of Sydney, the 10th Istanbul Biennial, Sharjah Biennial 8, Tirana Biennale and Transmediale 05. He has had solo exhibitions at Tate Modern (London), Junstraum (Innsbruck) and MCA (Chicago).  Rakowitz won the 2018 Fourth Plinth commission for London’s Trafalgar Square and is presenting his sculpture from The invisible enemy should not exist  (2007 – ongoing), until 2020.

Mark Lewisohn is the acknowledged world authority on the Beatles. His books include the bestselling and influential Recording Sessions, The Complete Beatles Chronicle and (as co-author) The Beatles’ London. The world’s only professional Beatles historian, he was consultant and researcher for all aspects – TV, DVDs, CDs and book – of the Beatles’ own Anthology and has been involved in numerous other projects for them, as well as independent works.

Arsalan Mohammad is a writer, editor and podcast producer based in Berlin. He writes for publications and institutions worldwide, including the The Art Newspaper, The Financial Times, GQ, Monopol, Taschen and www.artnet.com. Formerly Editor of Harper’s Bazaar Art Arabia, Arsalan has been covering the Middle Eastern art scene for over a decade. He also produces and presents podcasts for arts and cultural bodies, including Taschen, Blain Southern, Alserkal Avenue and many others as well as his own personal project ‘Albumtoalbum: The David Bowie Albums Podcast’. 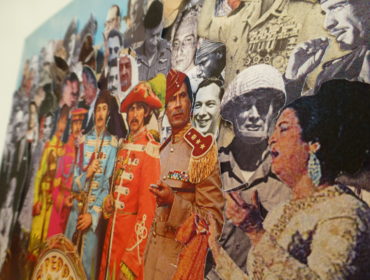