This display of over 70 works, hung from floor to ceiling in a kaleidoscope of colours, offers an original and personal selection by artist Cornelia Parker on the Collection’s breadth and function.

Titled after a well-known phrase used to remember the colours of the rainbow, the display includes works from across the colour spectrum. Parker has selected works whose dominant tones range from the luscious red draperies in Daniel Mytens’ full length portrait of Lady Anne Montagu, 1626, to the bright yellow of Martin Creed’s neon sculpture THINGS, 2000, from David Batchelor’s vivid shelf-like No. 5 (Green), 1999, to the royal blue background in Andy Warhol’s portrait of Queen Elizabeth II, 1985. The display also includes achromatic works such as Grayson Perry’s humorous black and white etching Print for a Politician, 2005.

The Government Art Collection has promoted British art and artists for over a  hundred years. Usually on display in more than 400 locations all over the globe, it includes paintings, sculptures and other works of art from the 16th century to the present day. This display is part of the Whitechapel Gallery’s ongoing programme opening up important public and private collections for everyone. 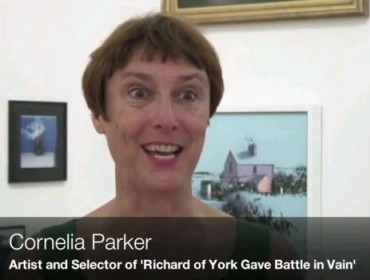