A strange metal object lies shattered in the desert sands. Is it from outer space? Or is it a fragment of our military disasters? This image by Sophie Ristelhueber (b. 1949, France ), taken in Kuwait after the Gulf War, is likened by novelist Tom McCarthy (b. 1969, UK) to the starling’s nest colonised by honey bees in W.B. Yeats’s Meditations in Time of Civil War (1922). The photograph and poem are the starting point for Empty House of the Stare, McCarthy’s meditation on surveillance and control, and their malfunction and breakdown.

Guest curator McCarthy builds his narrative around the work of seven artists in “la Caixa” Collection of Contemporary Art. In Illuminer (2001) by Steve McQueen (b. 1969, UK), a man watches a report about military operation in Afghanistan on tv in a dark hotel room. A sculpture by Isa Genzken (b. 1948, Germany) – crumpled bookshelves found on a lower Manhattan street after September 11, 2001 – bears an uncanny resemblance to the remains of the twin towers. From his series Destructuras, Aitor Ortiz (b. 1971, Spain) photographs a modernist building as a haunting concrete shell. If the reels of tape in the archive by Pedro Mora (b. 1961, Spain) contain any recordings, they are irretrievable.

We enter the ground floor gallery towards a radiant portal by Eugenio Ampudia (b.1958, Spain) that might offer illumination and clarity but could be a trick of the light, an illusion. Eve Sussman’s (b. 1961, UK) film about a worker in City-A, a Central Asia oil town uses an algorithm to determine the sequence of scenes so that, like real life, the story is never the same twice.

Experimental writer Maria Fusco stages an encounter, in which works of art by Ignacio Uriarte, Cindy Sherman and Alan Charlton give a presentation at a conference. 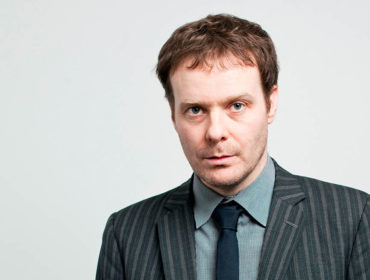 Award winning author Tom McCarthy is in conversation with renowned artist Fiona Banner aka The Vanity Press on his work and the ideas behind his selection for ‘Empty House of the Stare’, the most recent in the ‘La Caixa’collection displays.