Commission
Nalini Malani: Can You Hear Me?

★★★★ – The Guardian, ‘As with Malani’s shadow theatres, the animation chamber is like a dramatically illuminated cave. Image dances all around, projected at unsettling angles, like distorting shadows from a central fire. You can imagine them scratched on to a cave wall.‘

Whitechapel Gallery unveils a major new work, Can You Hear Me? by Nalini Malani, as part of its prestigious annual programme of artist commissions.

Embodying the role of the artist as social activist, Malani gives voice to the marginalised through visual stories which often take the form of multi-layered, immersive installations, exploring themes of violence, feminism, politics, racial tensions and post-colonial legacies. Widely considered the pioneer of video art in India, Malani has a 50-year multimedia practice that includes film, photography, painting, Wall Drawing/Erasure Performance, theatre, animation and video. Winner of the 2019 Joan Miró Prize, her work has been celebrated in museum surveys and biennales around the world.

Malani uses line, colour and light to create monumental, multi-layered installations. In this new production for London, the violent death of a child in India launches a flow of images and ideas that transcend national trauma to address global issues of social injustice. In Malani’s universe the voiceless share centre stage with mythic characters, intellectuals and poets. Moral outrage combines with a rollicking delight in satire and absurdity.

Can You Hear Me?, the artist’s first UK commission, comprises 88 animations projected on the walls of the Whitechapel Gallery’s historic interior. Made between 2017 and 2020, they feature overlapping hand-drawn images and notes, as well as fragments of quoted text. In this installation Malani once more fills the former central reading room of the Whitechapel Public Library with books, transcribing quotes by influential writers such as Hannah Arendt, James Baldwin, Bertolt Brecht, Veena Das, Faiz Ahmad Faiz, Milan Kundera, George Orwell and Wislawa Szymborska. This 21st century form of the artist’s notebook is projected directly onto the gallery’s brick walls with text and image taking the form of moving graffiti.

Content warning: This episode features a reference to rape and sexual violence. 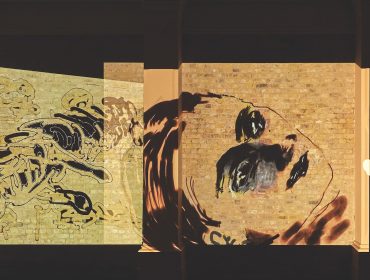 Head to our Blog to read a new text by Nalini Malani about the inspirations behind her commissioned Animation Chamber. 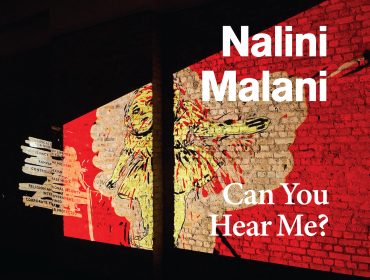 This comprehensively-illustrated catalogue includes brand new photography of the commission, plus essays by the artist and curators.