Off-Site Exhibition
The Palace at 4 a.m.

NEON in collaboration with the Ephorate of Antiquities of Cyclades presents: The Palace at 4 a.m. This exhibition of contemporary art is inspired by the collection of the Archaeological Museum of Mykonos. It takes its title from an iconic work by Alberto Giacometti.  The Palace at 4 a.m. is a small wooden sculpture he created in 1932; like a theatre it features a dramatic encounter between a woman, a bird and a spinal column. Presiding over these protagonists is a mysterious deity.  The scene is a palace before sunrise, a time of dreams, ghosts and secret assignations.

The exhibition draws on the strange drama of Giacometti’s masterpiece to evoke the spirits, rituals and myths that haunt ancient archaeological sites such as Delos. The island’s statues, architectural fragments, vessels and tombstones collected in the museum are attributes of a cosmopolitan citizenry that disappeared two millennia ago.  Just as Delos once brought together people from across the ancient world, The Palace at 4am features a global roster of thirteen artists: Lynda Benglis; Haris Epaminonda; Simone Fattal; Petrit Halilaj; Ian Law; Maria Loizidou; Daria Martin; Duro Olowu; Zohra Opoku; Rena Papaspyrou; Stefania Strouza; Barthélémy Toguo; Paloma Varga Weisz

Organised and commissioned by NEON

The work of 13 artists is juxtaposed with the Archaeological Museum of Mykonos’ collection and additional treasures selected by the archaeologists of the Ephorate of Cyclades.  Like a theatre curtain a monumental decorative drape newly commissioned from by Duro Olowu, which combines the richly decorated textiles from northern and southern hemispheres, provides the overture to the exhibition. An installation of artefacts – both platonic and erotic – has been composed by Haris Epaminonda.  Simone Fattal presents her haiku-like ceramics evoking classical ruins and monsters; while Rena Papaspyrou magically transforms contemporary detritus into archaeological fragments. Ian Law enters the hallowed confines of the museum vitrine with votive figures that incorporate the ashes of the dead.

In the central gallery Paloma Varga Weisz pitches a beautifully carved contemplative female figure from the heavens; she is suspended in drapery that recalls the Baroque. Below her are two powerfully gestural ceramics, evoking landscape and habitat by renowned painter Lynda Benglis. Giacometti’s work is evoked by Daria Martin’s film In the Palace where she reconstructed his tiny sculpture as a full-scale stage set for a group of performers who take up the poses and gestures of avant garde Modernism.  A spiral map of fragments by Stefania Strouza is arranged according to the wandering of Zeus’ lover Leto across the islands of the Aegean, in a shrine to female goddesses.

In another wing of the museum the towering porcelain vessels of Barthélémy Toguo use delicate glazes to depict the deathly iconography of the virus in African society.  Opposite hang self-portraits screened on Ghanaian textiles by Zohra Opoku her image metamorphosing from her botanical environment. Where the museum offers a retirement home for the vessels of antiquity, Petrit Halilaj brings fragments of Neolithic pottery back to life by turning them into birds for whom he has constructed two nests.  Elsewhere he has installed the museum conservationist’s deadliest enemy – a giant moth is suspended from the museum’s ceiling, a metaphor for all those who can only reveal themselves under cover of night.

In the museum garden Maria Loizidou has suspended a huge pelt handwoven from a stainless steel mesh, remnant of an entity that has either been hunted and skinned; or  sloughed off its own skin to live again.

Lynda Benglis: Born in 1941, Lake Charles, Louisiana, Benglis is based in New York and lives between the US, Greece and India. She is known for her process-based abstract paintings and ceramics and has been exhibiting since the 1970s.

Haris Epaminonda: Born in 1980 in Nicosia, Cyprus, Haris Epaminonda lives and works in Berlin and Cyprus. She creates sculptural installations, photographs and films and has been exhibiting since the 2000s.

Simone Fattal: Born in 1942 in Damascus, Syria, Fattal lives and works in Paris. Having started her career as a painter, poet and film-maker she is now celebrated for her work in ceramics. Fattal has been showing since the 1970s.

Petrit Halilaj: Petrit Halilaj was born in 1986 in Kosterc, Kosovo, Halilaj lives and works between Germany, Kosovo and Italy. He has been showing his sculptures and works on paper as installations since the 2010s.

Ian Law: Born in 1984 in the United Kingdom, Law lives and works in London. He uses ceramic to create sculptures and has been showing his work since 2010.

Maria Loizidou: Born in Cyprus in 1958, Loizidou lives and works in Nicosia. She creates sculptures and environments in public space and has been exhibiting since the 2000s.

Daria Martin: Born in 1973 in San Francisco Daria Martin lives and works in London. She is celebrated for her award-winning moving image works which she has been showing since the 2000s.

Duro Olowu: Born in 1965 in Lagos, Nigeria, Olowu lives and works in London and is renowned as a designer and curator. He has been showing his collections and curating projects since the 2000s.

Zohra Opoku: Born in Germany in 1976, Opoku lives and works in Accra. She works with photography and textiles and has been showing her work since the 2010s.

Rena Papaspyrou: Born in Athens in 1938, Papaspyrou lives and works in Athens. She is known for her ready-made conceptual paintings and has exhibited since the 1980s.

Stefania Strouza: Born in Greece in 1982 Strouza takes a research-based, conceptual approach to the creation of sculptural installations. She has been exhibiting since the 2010s.

Barthélémy Toguo: Born in 1967 in M’Balmayo, Cameroon, Toguo lives and works in Paris and Cameroon, where he founded the Bandjoun Station art centre. He makes actions and sculptures and has shown his projects since the 1990s.

Paloma Varga Weisz: Born in 1966 in Mannheim, Germany Varga Weisz lives and works in Dusseldorf. She is renowned for her sculptures in wood, ceramics and metal and has exhibited since the 2000s.

NEON is a nonprofit organization that works to bring contemporary culture closer to everyone. It is committed to broadening the appreciation, understanding and creation of contemporary art in Greece and to the belief that this is a key tool for growth and development. NEON, founded in 2013 by collector and entrepreneur Dimitris Daskalopoulos, breaks with the convention that limits the contemporary art foundation of a collector to a single place.

NEON’s space is the city. It acts on a multitude of initiatives, spaces and civic and social contexts. It seeks to expose the ability contemporary art has to stimulate, inspire and affect the individual and society at large. NEON constructively collaborates with cultural institutions and supports the programs of public and private institutions to enhance increased access and inventive interaction with contemporary art. www.neon.org.gr

The Ephorate of Antiquities of Cyclades

The Ephorate of Antiquities of Cyclades constitutes a Directorate of the Hellenic Ministry of Culture and Sports. It is responsible for all the material remains that have been brought to light or are preserved in the territory of the island complex of the Cyclades. These evidences of human presence date back to Early Prehistory and continue until the establishment of the Modern Greek State, in AD 1830. Such a broad chronological context incorporates many different expressions of the cultural heritage of the area: archaeological sites, monuments, castles, traditional settlements and of course a whole world of movable finds and relics that are selectively presented in the Ephorate’s museums and collections.

During recent years, the Ephorate of Antiquities of Cyclades has developed an extensive action plan aiming to manage the voluminous cultural capital under its responsibility. The protection and the thorough documentation of the archaeological, architectural, and historical data of the monuments are the primary, essential act of this initiative. Having successfully attracted important donations and funding through competitive European programmes, the Ephorate is working towards the conservation, restoration, and promotion of important archaeological sites and monuments. The work of the Ephorate is also focused on communicating its work, engaging with the local community, keeping an active presence in international scientific and museological fora, and implementing new ways of expression. In line with these efforts, this summer the Ephorate opens up towards the world of contemporary art, wishing to underline the revitalizing force of the form and timeless inspiration, and the need for a dialogue between the ‘established’ past and contemporary artistic expression. 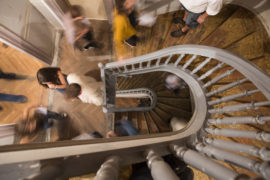