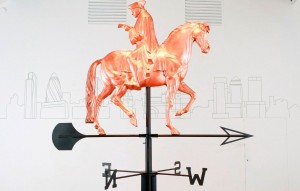 Rodney Graham’s copper and steel weathervane, which is the first artwork commissioned for the expansion of the Whitechapel Gallery, which reopens in Spring 2009, at the Whitechapel Gallery, east London. PRESS ASSOCIATION Photo. Picture date: Tuesday October 14, 2008. Today Whitechapel Gallery Director Iwona Blazwick OBE unveiled the very first artwork commissioned for the exciting expansion of the Whitechapel Gallery, opening in Spring 2009.  Canadian artist Rodney Graham’s beautiful copper and steel weathervane is based on his 2005 diptych “Allegory of Folly: Study for an Equestrian Monument in the Form of a Wind Vane” where he depicts himself as Erasmus, the 16th century humanist and classical scholar, seated backwards on a horse and reading his most well-known study, The Praise of Folly. The weathervane will be installed permanently on top of the former library building in the coming week. Photo credit should read: Anthony Upton/PA Wire