The revolutionary painting of American Abstract Expressionist Jackson Pollock (1912–1956) was premiered in the UK in 1958 at the Whitechapel Gallery. Travelling to Europe from New York’s Museum of Modern Art after Pollock’s untimely death, the show provoked bewilderment and excitement. Six decades on, Pollock’s masterpiece Summertime 9A (1948) returns to
the Whitechapel.

Director Bryan Robertson had decided that the Gallery should be as audaciously modern as Pollock’s art and invited architect Trevor Dannatt (b. 1920, UK) to design the exhibition. Dannatt’s constructivist design transformed the salon style gallery into a white cube. His ‘cohesive architectural ensemble’ included freestanding breezeblock walls, black panels, footlights, and an undulating ceiling of suspended fabric immersing visitors in a powerful encounter with painting as environment. MoMA’s International Programme was rumoured to be sponsored by the Central Intelligence Agency (CIA) as part of a raft of cultural initiatives serving as soft power in the Cold War. Abstract Expressionism was used to emblematise freedom of expression, countering the communist ideology of the Soviet Union.

Staging Jackson Pollock also includes rare archival material and an exclusive recent interview with Dannatt, to revisit how the show was organised and the reasons for its profound significance.

This exhibition is generously supported by: The Pollock-Krasner Foundation and those who wish to remain anonymous 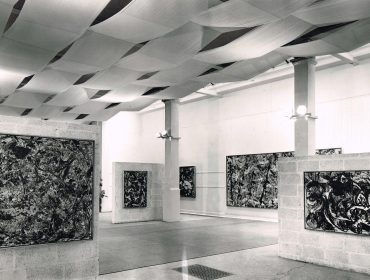 Join Curator Nayia Yiakoumaki and Head of Exhibition Design and Production, Christopher Aldgate as they lead a tour of this display, exploring how exhibition architecture was revolutionised by the art it was designed to display.