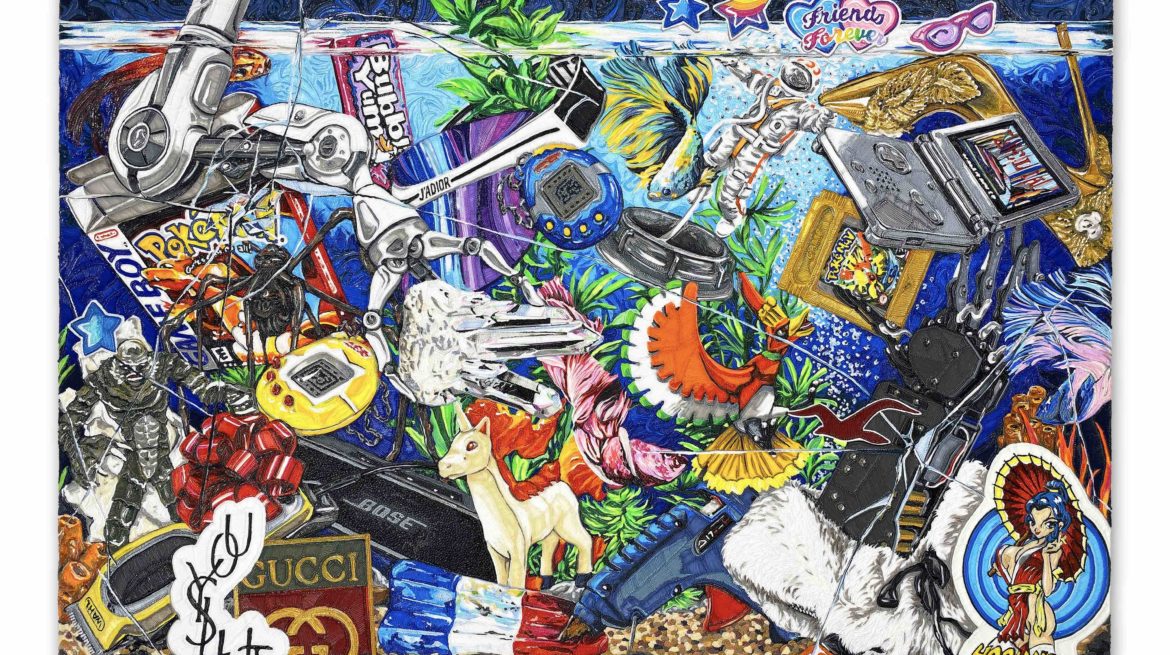 PUBLIC Gallery is delighted to present BLACK FRIDAY, the debut UK solo exhibition of Seattle based artist Anthony White. The show presents a new series of seductive portraits and still lifes that burst with nostalgic memorabilia and objects of aspirational desire, all meticulously spun from coloured threads of common PLA plastic.

White’s tondo, square and rectangular sculptural paintings act as portals into a world of consumer excess. Instant and over-stimulating, the scenes are populated with brand logos, banal mass-produced toys, remnants of personal habits, designer goods and obsolete technology that coalesce to form a visual synthesis of our attachments and desires. By situating both mass-market and extravagant luxury items alongside one another White disrupts the prescribed hierarchies of society, status, and wealth employed in so much of contemporary culture’s presentation of lifestyle identity.

Never has the ability to create and maintain a perception of our own identity been easier. In this culture of ‘self-branding’ the lines between what is fact and fiction are constantly blurred. White’s work, inspired in part by the society portraits and vanitas still lifes of the Dutch Golden Age that spanned the seventeenth century, questions the contemporary icons we attach to ourselves to help shape and broadcast our desired identity.

The artist comments: ‘You Are Your Selfie’ – I enjoy the way that this truism jumps back and forth between fallacy and truth. With the growth of technology, we actually have the ability to curate the perception of our own existence. Our image is more important today than ever because of its accessibility and visibility, but also how easy it is to mould it to our needs and alter how others perceive us.

White ‘paints’ on handmade wooden panels with one of the most commonly used consumer plastics, polylactic acid (PLA). He heats and melts individual strands of the plastic at 200 degrees, laboriously filling each scene line by line, colour by colour, to gradually weave an ornate, richly coloured and textural surface. This time-consuming practice, which utilises the same common materials many of the depicted items consist of, results in large tumultuous compositions that form familiar Instagram-style representations of consumerism as viewed through the lens of an iPhone.

Catharina Manchanda, curator of modern and contemporary art at the Seattle Art Museum comments: Anthony White’s tightly packed still lifes of consumable goods, candy, car keys, photos, mirrors and branded icons move beyond the glamour of display to the overwhelming glut of over-consumption. Staged for display, his figures are often found lounging and absorbed in their cell phones—the vehicle through which personal experiences, goods, as well as one’s personal image are leveraged into a package of continuous and total consumption.

Anthony White (b. 1994) is an artist and curator based in Seattle, Washington. In 2018 he received his BFA from Cornish College of the Arts and was the recipient of the second place XL Catlin Art Prize juried by prominent international museum curators at the New York Academy of Art in NYC. This year he received the 2019 Special Recognition award from the Seattle Art Museum’s Betty Bowen Award committee and the COSA 2019 Award. During the 2019 Seattle Art Fair and EXPO Chicago 2019, both the Frye Art Museum and the Crocker Art Museum acquired work by Anthony White to add to their permanent collections. He is currently represented by Greg Kucera Gallery in Seattle.