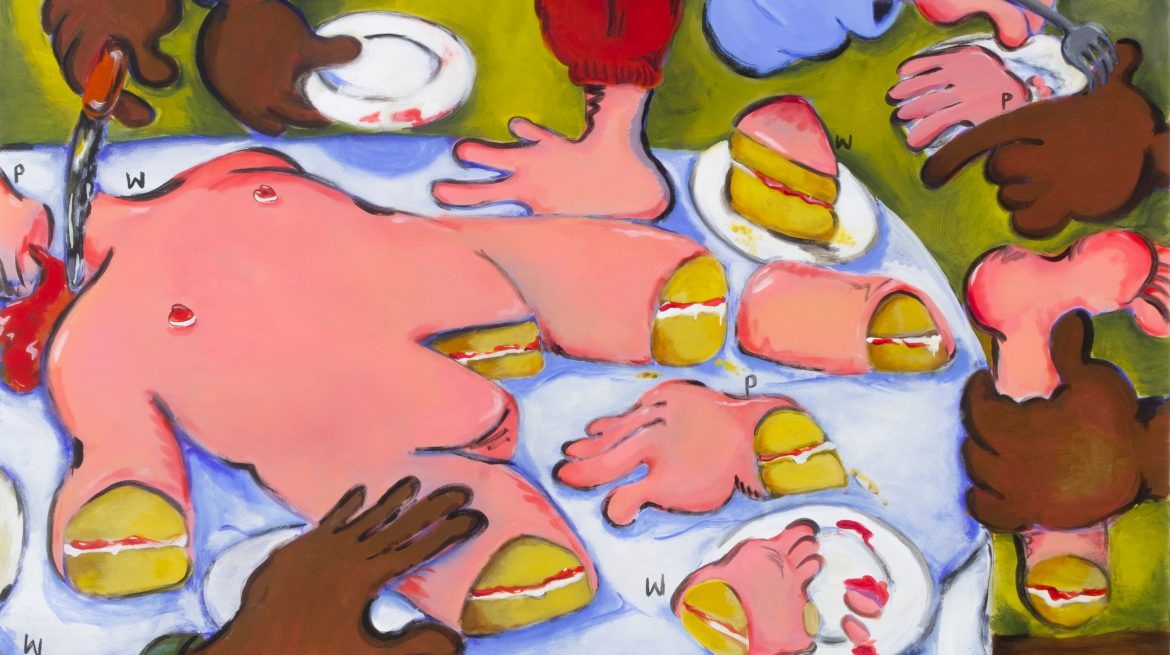 Challenging hierarchical systems of power, the exhibition intentionally destabilises and interrogates these modes of control by reimagining a world in which the role of the oppressor is inverted.

With this powerful body of work Sterling centres violence against women, and in particular, women of colour over the past millennia. She intentionally subverts via the canon of male dominated art history, the gaze and manipulation of the female body, creating scenes in which it is the man that is being consumed, or running for their life. One work sees the sunburnt torso of a white male holiday reveller, branded with the letter ‘w’ by the sun-screened black hands chasing him out of the frame. There is a direct comment here on the ownership historically of slaves that had fled their captor, and their identity being reduced to a mark.

A white sponge cake with pink icing lies on a table, whilst gluttonous and excited attendees cut and grab at pieces; their faces obscured, with just a flurry of hands vigorously moving and competing for a slice. We look again. We are confronted with a white male torso being dissected and pulled apart, raspberry jam – or is it blood – spurting from his neck, his most ‘prized possession’ removed. There is always an uncomfortable unknowing in Sterling’s work – cake melded with flesh; is that a real artery being sliced into, or the accoutrement to a hen party.

Through this readdressing of what has come before in art’s representation of women – Gaugin’s abuse of the young girls of Tahiti that have become some of his most career defining works, or De Kooning’s mannequin-like depictions of the female form – Sterling adds to history’s depiction of men, and at once looks towards bringing a focus to patriarchal oppression.

There is a playfulness that appears on the surface of these works; bringing to mind watching a Walt Disney film for the first time or seeing a Hogarth exhibition at The National Gallery as a child. But those cultural references carry a different significance in adulthood: seeing the caricatured features of the African American character in ‘Tom and Jerry’ or the racist imagery that pervades Baroque paintings. Through creating her own discourse with reference to all of these cultural signifiers, Sterling’s paintings in Manslaughter serve an allegorical purpose, forcing us to confront our prejudices and question the way in which we consume mainstream culture. 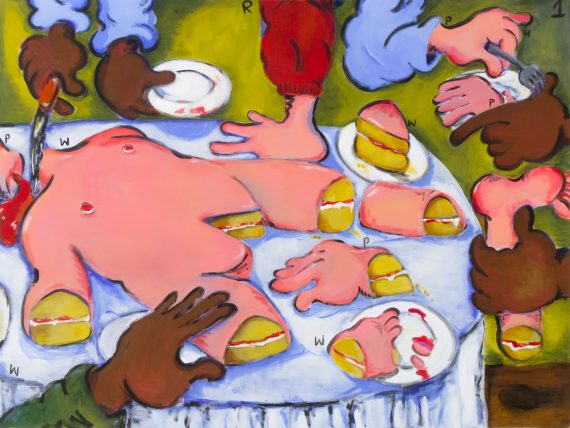