Lucy Cash is an artist whose work takes different forms – moving image works, photography, performance and writing. From a background in movement and performance her work often gives attention to subtle choreographies that underpin the everyday. She is drawn to beginning with the extraordinary appearance of ordinary things – things that are already in the world, and that invite small interventions between the poetic and scientific, philosophical and humorous, intimate and political. Both her work, as well as her approach to making, draw on associative thought processes – making connections between the everyday and the esoteric.

Having considered some performative approaches to photography in the Autumn term, Cash began exploring the neighbourhood surrounding the school. She worked with several students individually to realise projects that involved being curious or taking a risk and that extended the imaginative focus of art-making into everyday life. Simultaneously the class looked at different kinds of maps – not just geographical, but also maps of emotions, and thoughts; maps about time as well as place. Underlying all this work was an emphasis on collaboration and a continuing exploration of the Foundation AIR Artist Collective that was initiated as an experimental group identity for the class in the autumn term.

During the timespan of the residency, the school underwent redevelopment, and a hoarding separated the school playground from the new building. Inspired by the work of street artist JR, the group created twenty, large scale portraits, one of each member of the collective. Curious to emphasize scale and to play with both visibility and anonymity, each portrait showed only the individual’s eyes. The images were printed as A0 size photographic posters and with an inspiring amount of focus and co-operation; the class installed them on the hoardings during one intense fly-posting session. Producing the series of images, My Body Folded Like A Map, and taking hold of public space in this way was a bold and provocative experiment for the group. Responses ranged from the puzzled, “Are those students from our school?” to the impressed, “They all look so strong and beautiful”, to the fearful and critical, “I feel like I’m being watched” and “Some of those eyebrows need shaping.” Whilst the photographs capture the unenhanced gaze of each person; as a collection of eyes, separated from faces, they also inhabit a slightly dream-like territory, emphasizing the extraordinary nature of what it is to look and to be looked at. 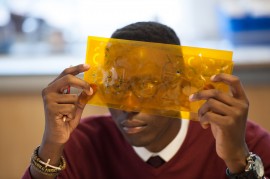 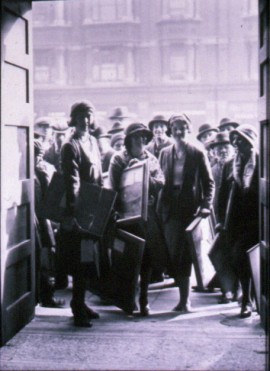