Community Conversations is a series of discussions prompted by networks, collaborations and friendships developed through the Whitechapel Gallery’s Community Programmes. We want to share the perspectives of the groups we work with and to reflect on a year that revealed the strength, resilience and power of community.

“Voice is good, important. If your voice is not clear then people aren’t listening.” – Sabera

Over the course of two years, a group of women from City Gateway Women’s Programmes met regularly to explore what it means to ‘have a voice’.

Based in Stepney Green, City Gateway supports women to access learning and welfare programmes that promote independence, confidence and access to employment. We previously worked together in 2015-16 on a project called The Art Already Made, and have maintained a friendship between our organisations over many years. Voices That Matter came after joint reflections on the visibility of women in public spaces around the Whitechapel area – from green spaces to public institutions. In the wake of successive closures of women’s spaces in the Borough – in particular the Matrix-designed Jagonari Centre – it felt all the more urgent to be exploring the importance of creating spaces to form community with other women. 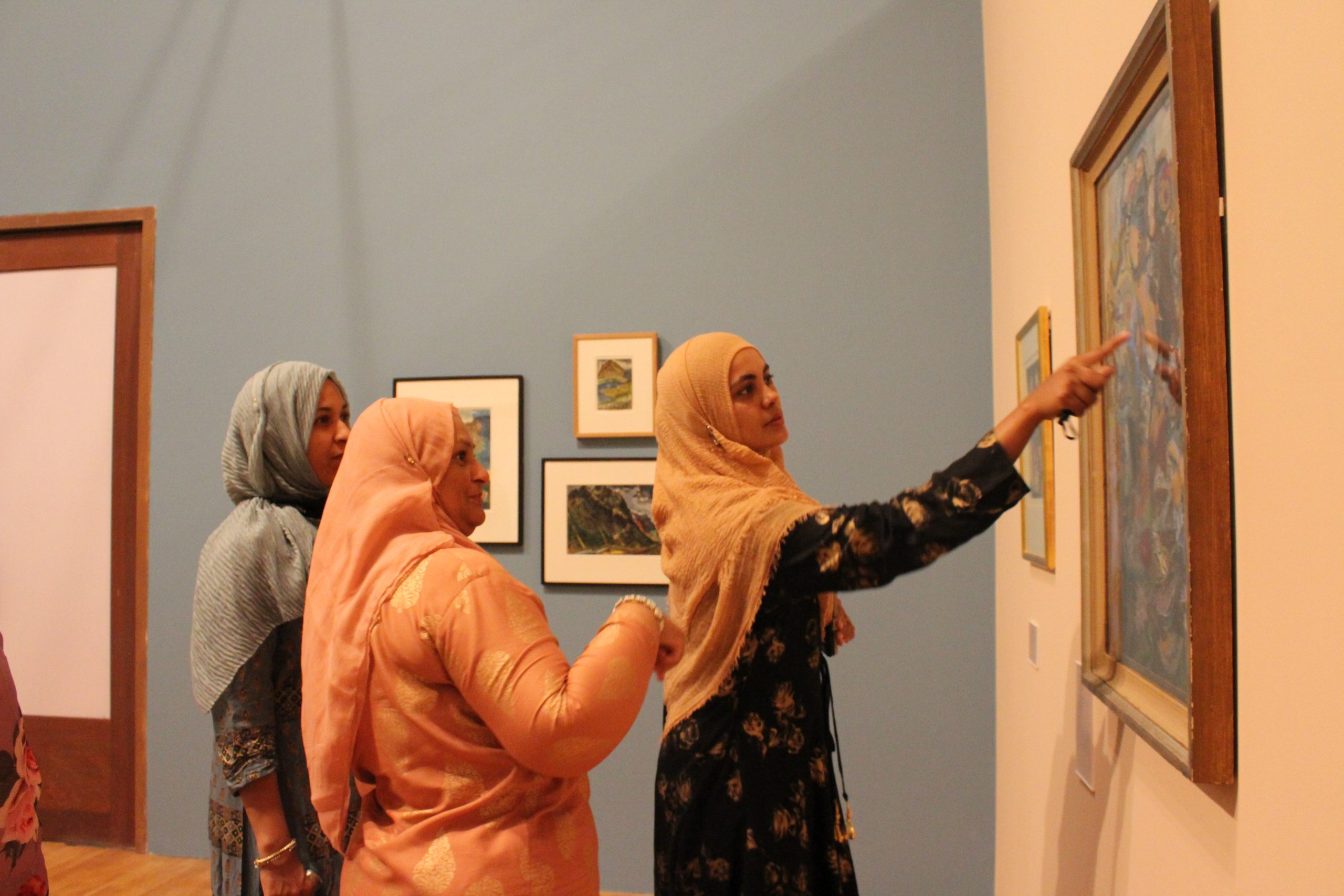 “So much of myself goes to other places – my home, my family … Now, it is time for my own self.” – Jubeli

Kate Smith, a multilingual artist, composer and vocalist, led the first year of this project, guiding sessions that started with the idea of ‘voice’ as an expression of the body, created by the lungs and carried on the breath, conveying not only our thoughts and emotions, but also supporting our well-being. Over time, the sessions opened into deeper conversations about ‘voice’ relating to our culture, identities, and personal stories, as well as the political implications of speaking out and being heard. We spent time in the Gallery’s Anna Maria Maiolino exhibition, reflecting on the work of an artist who worked from her studio ‘kitchen’ and whose work interrogated her own changing identities as a woman, a mother, and a citizen of several countries.

The project came to a pause in 2020 in the wake of the Covid-19 pandemic; throughout much of that year the Gallery, like all public institutions, was forced to close its doors and suspend programming. We kept in touch, having cups of tea in the park when the restrictions lifted in Summer 2020, and started making plans to return to our community programming. At the time, the British Bangladeshi community was experiencing the highest pandemic mortality rate in the UK – in the East End, we heard anecdotally that there was no Bangladeshi family that did not experience a death. The majority of the women at City Gateway were navigating the pressures of home-schooling their children, whilst taking care of elderly parents and relatives, and we needed to make sure that continuing the project was what everyone wanted. 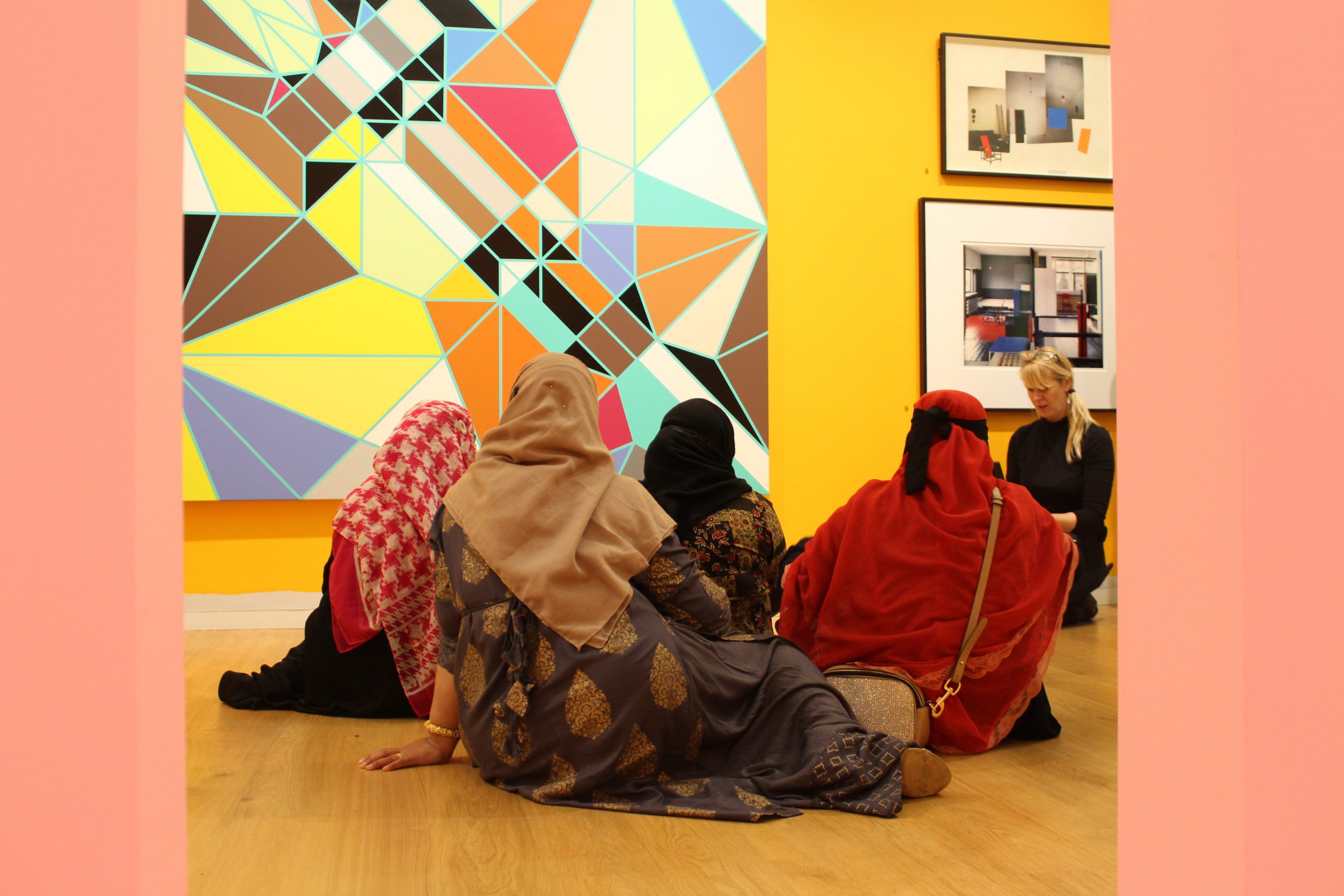 “It is my passion to share my love for art with my community and I want to carry on with you doing this.” – Moshoda

Most of the women did not have regular Internet access, or the use of home computers, and so in very uncertain territory and without the ability to gather in person, we made a plan to experiment with a phone-based project. Using WhatsApp, Kate initiated a series of audio and visual prompts, asking the group to respond with videos and sound recordings. Through this ‘call and response’ exercise, we gained a sense of what we each were going through; snippets of the ways we were adjusting to the restrictions, the stresses we were experiencing, and the ways we were finding joy. Kate then gathered these clips and produced a sound piece called Sharsh which translates in English to ‘breath’. In Autumn 2021, we met to distribute Sharsh via QR codes around the streets between City Gateway and the Whitechapel Gallery, which exists as an invitation to listen to the music inspired by our breath.

Several of the women had mentioned their interest in making a film that would showcase themselves and the lives they lead. Hussina Raja, an artist and performer, led us into the second year of this project. Through a series of sessions in Spring and Summer 2021, Hussina facilitated sessions held at City Gateway that focused on the camera as a tool for self-expression and taking ownership over one’s own narrative. Each group member was given a pack containing art materials and tools that would enable the women to use their phones to begin recording their own lives, with Hussina offering prompts that encouraged the group to consider what story they wanted to tell. 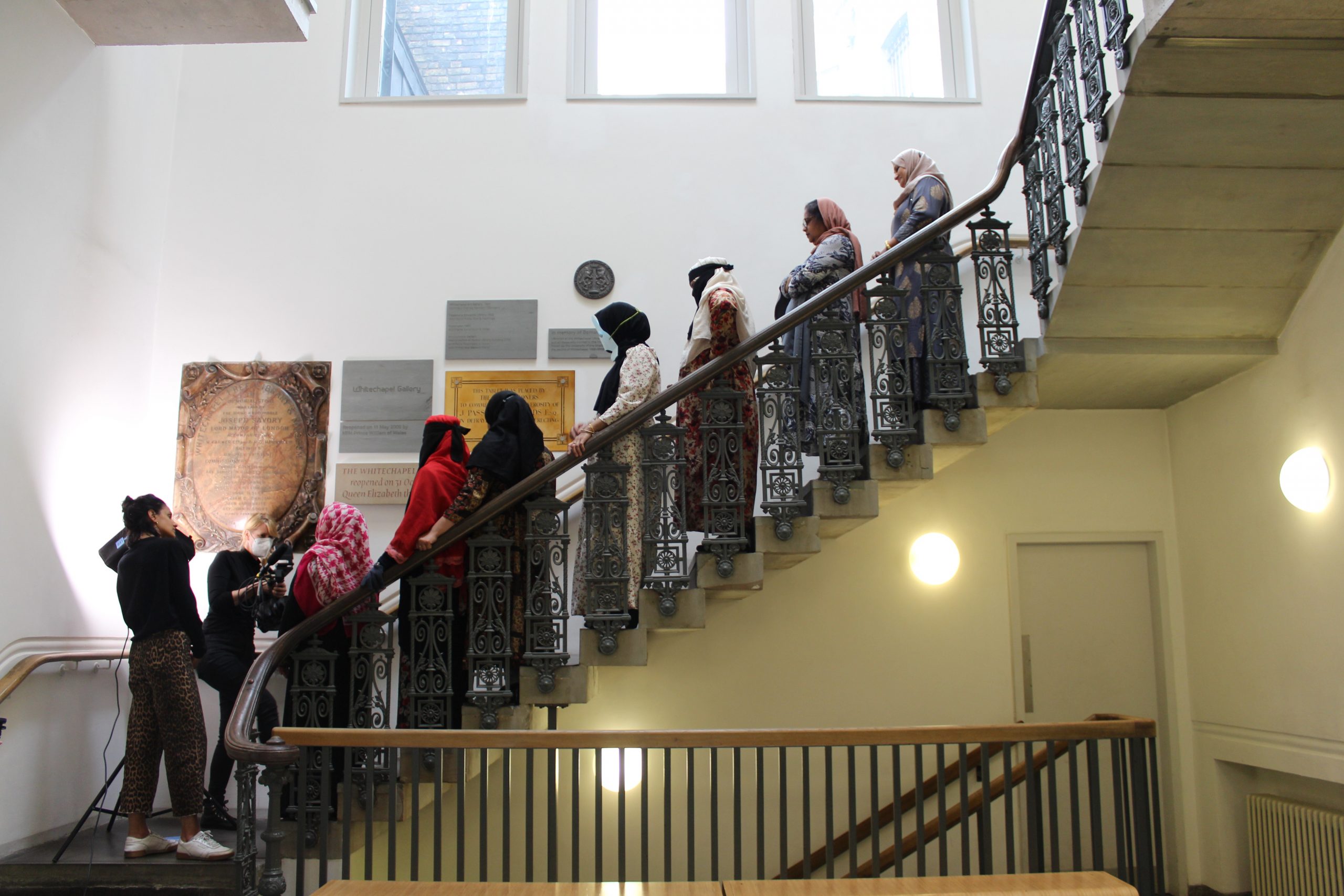 “I love coming to these sessions, I never want to miss one. I used to have no confidence, and I would even cry about how lonely I felt. But I feel really confident now. After these sessions, I feel more confident to call the doctor, go shopping, organise my life.” – Lima

During one walking workshop, we traced a route together from City Gateway to the Whitechapel Gallery. Rather than using the most direct streets that connected the two organisations, we were drawn instead to meander through green spaces, taking rests in the shade of trees in the park, and making cuttings from plants growing in Stepney City Farm. We spent several sessions exploring the Gallery and spent time filming in the exhibitions of our Summer 2021 season including Ayo Akingbade, Nalini Malani and Eileen Agar, taking inspiration from the diverse approaches of these artists. Hussina worked with the women to create surreal scenes, using parts of the Gallery as a backdrop, and props such as native Bangladeshi fruits and sari fabric. The film’s title, Bidesi Mohila, translates in English to ‘travelling women’, a reference to the experience of building a life and family in London, whilst longing for Bangladesh.

At the close of this project, we discovered that City Gateway’s Women’s Programmes faces closure due to lack of funds. The women now face a fight to claim a space for themselves to continue learning, developing and creating. As we consider our next steps in our work together, it seems that the questions of who has power and agency in our city remain more important than ever.

You can watch the film here, and listen to the sound work here.