This week we travel to India via email to meet Jeebesh Bagchi, Monica Narula, and Shuddhabrata Sengupta from Raqs Media Collective. Their film Passwords for Time Travel (2017) is currently screening as part of our global online season of Artists’ Film International. We discovered what inspired the film and how they are responding to the world’s COVID-19 lockdown. 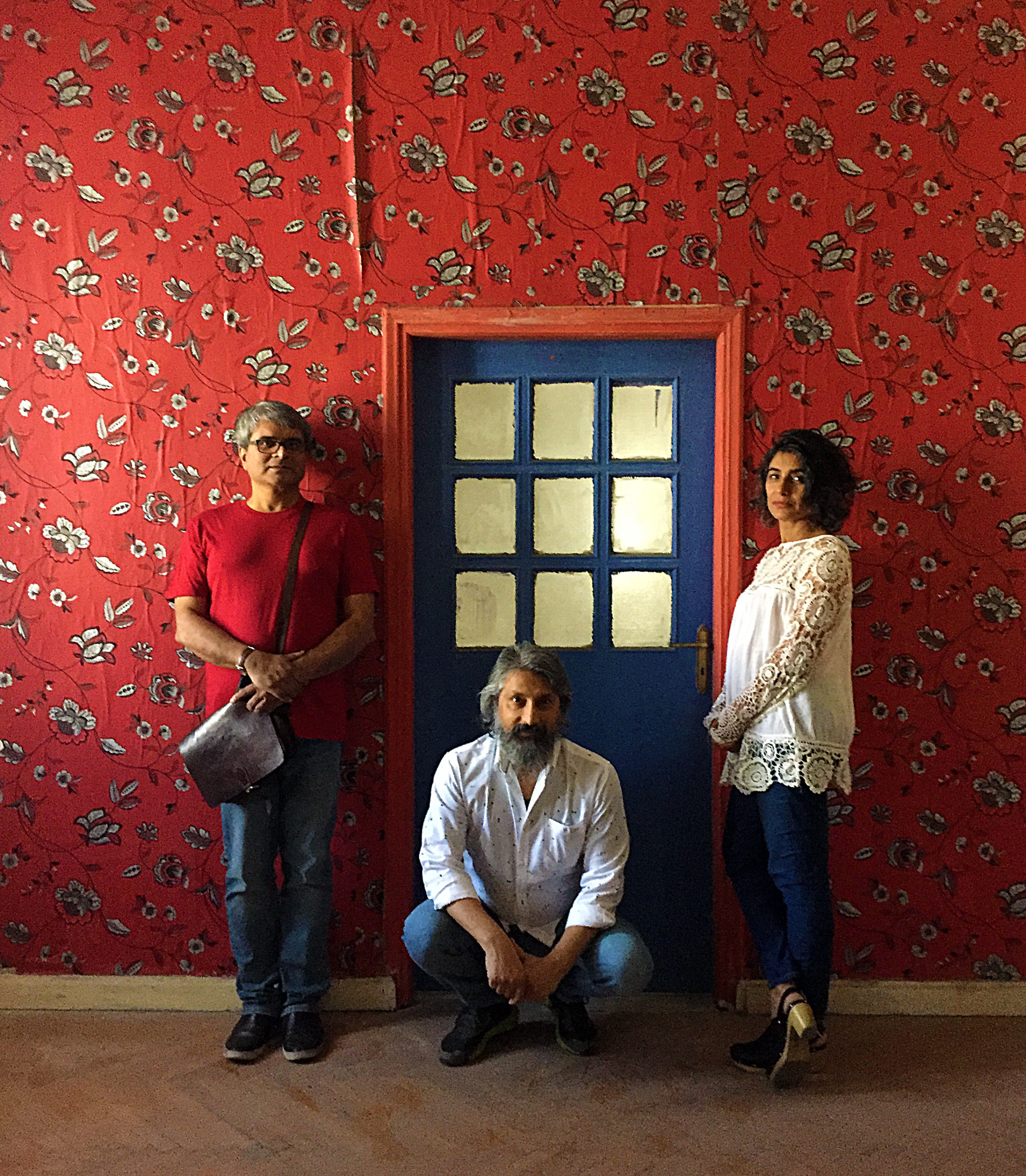 Q: Where are you from and how did you meet and start as a collective?

A: We live and work in Delhi, a dense and complex city. We met as film students in Delhi and enjoyed the way we challenged each other’s thinking. Raqs began in 1992, which means we have been working together for 28 years

Q: The word “raqs” is found in a number of languages including Urdu and Arabic. It can be used to describe an intensification of awareness and presence attained by whirling, turning, or being in a state of revolution. For Raqs Media Collective, we understand it means ‘kinetic contemplation’ and a restless and energetic entanglement with the world, and with time. What inspired/influenced you to create Passwords for Time Travel and where does the work fit into your wider practice and concerns?

A: We think a lot about time, and lately, we’ve been talking to each other (yet again) about how our experience of time is not linear. “Passwords for Time Travel” addresses the sense we have of the way the future, or ‘other times’ are already entangled in the present. One way of looking at this is in terms of new thoughts that are already present in consciousness but lack the words to ride on. This work invents some of those words and uses them as passwords, to open new doors.

Q: How are Raqs Media Collective finding the current situation of being at home and how is this is affecting your practice?

A: We meet on virtual platforms, every day, or almost every other day. We talk to each other. Send each other things to read and think about on messaging apps. We stay connected, liminally, and subliminally. There are long conversations and long silences.

Our studio is silent and empty. But there is a lot of thinking going on between us. This is a time of pause, of taking the time to watch things slow down. Of winding and unwinding. We’re thinking a lot about how it makes us reconsider questions of scale, speed, and priority. The gifts and barbs this time brings with it are now under the skin of our triangulated consciousness. We look at ordinary things with new eyes. That is bound to affect the way we make work. We will think a lot about what it means to ‘breathe life’ into a work. Because we’re all aware, in new ways now, of what things like breath and life can mean. 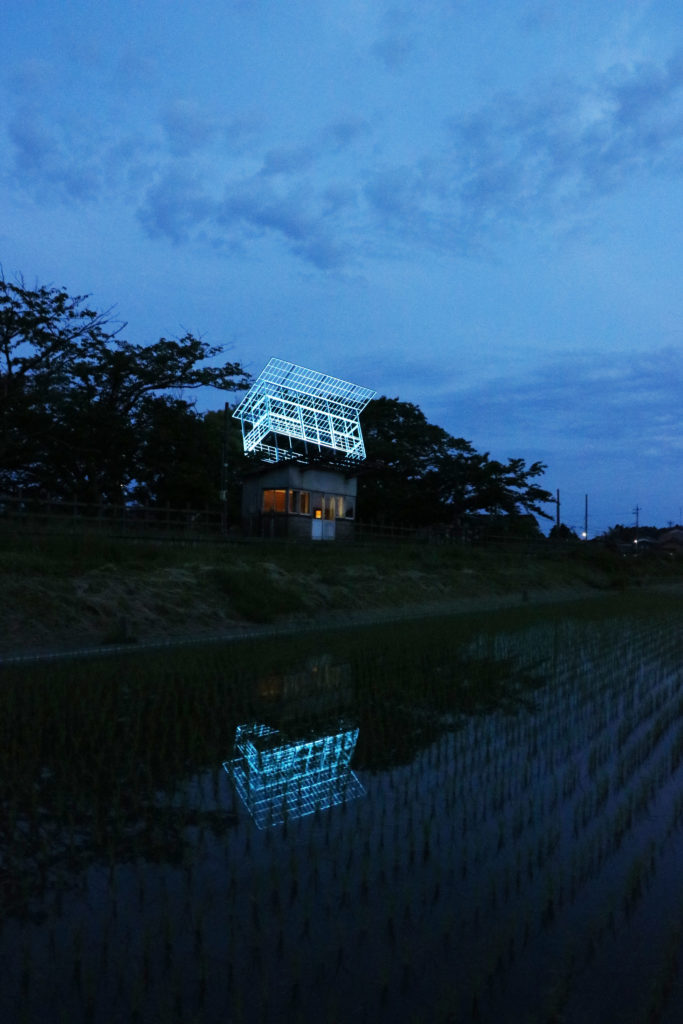 ‘A double image might occur when reality exhales. In the breathing out of a form, we might see an emanation, a token of its impression in the air, on the senses. The double image of a railway station hovers over a rice field and an abandoned railway line, illuminating a corner of the sky. No longer in the way of any ghost train. It is its own spirit now. Utsushimi/ Double Image/ Token/ Emanation takes the outline of a common infrastructural feature and extrapolates its form through a mode of ‘drawing sculpture’ to create a moment of cognitive dissonance between an object and its skeleton. The emanation – an exoskeleton – stands at a tangent to the structure by day, and is illuminated by night. This circadian rhythm of illuminated and non-luminous states makes the work take wing, like a firefly that glows in extreme slow motion.’ 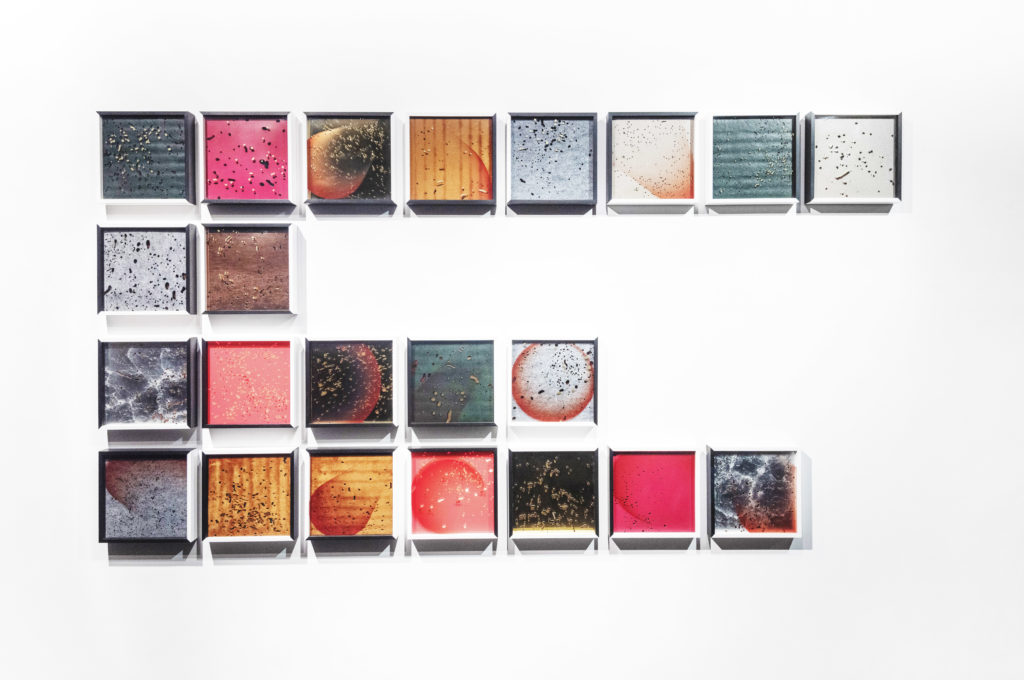 ‘A singular array of surfaces in materials that range from leather to metal celebrate the essential instability of all substances. Nothing stays pure. Everything is eaten away from the inside by toxicity in equal measure. Porosity is ubiquity. The action of time, and perforations produced by different kinds of toxicity – proliferate porosities. Bookworms tread pathways in bound books, the unpredictable curvature of space-time eats wormholes into the universe. The claim to solidity in all structures crumbles in equal measure. Even time leaks when space is ridden with holes.’ 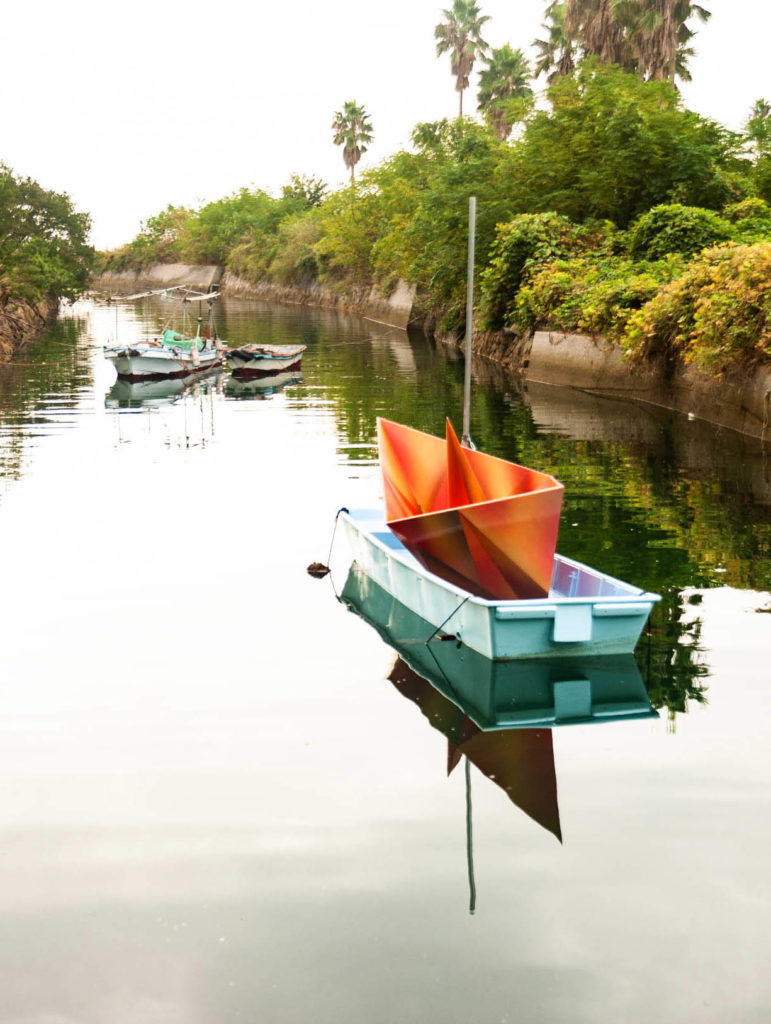 yukue mo shiranu / not knowing where it goes.

koi no michi kana / is this the course of love

‘A real boat cradles an ‘ideal’ boat. Just as a moment in life cradles a drifting idea. Love is held by the memory of love. An image is held by itself, afire. In this sculpture with found object and lenticular fold, Raqs Media Collective play with light, the geometry of folds, and the optical properties of materials to offer a representation that is as pared down to essentials as a child’s idea of a boat. Like a paper boat made by a child and set afloat on a stream, Raqs’ sculpture, ‘The Course of Love’ floats on a stream called consciousness, bringing to mind everything from Yoshitada’s evocation of the course of love to the image of a boat on fire in the sea.’ 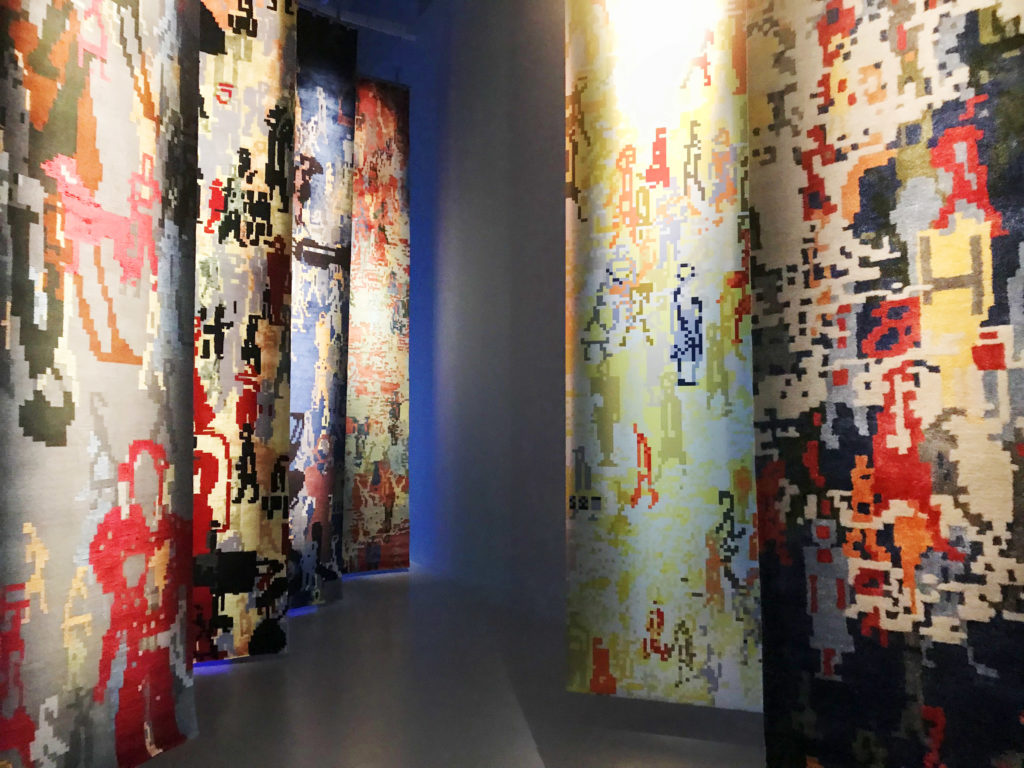 ‘Eleven hand-woven carpets and two paper prints are hung throughout the gallery, cascading to the ground. The forms that inhabit the woven textiles represent a mass, a collective, or a network of people as an interlaced, connected weave. The work explores the meaning of the verb ‘to people’, which can suggest populating and inhabiting a space, willfully or enforced, but can also be read as a work that is ‘for people’, referring to one person or multiple individuals. The pixelated figures create a modular, blurred landscape of objects and human forms in transition. Together the carpets constitute one image of the nexus of people coming together in large urban cities. The work is produced for the exhibition in reference to the city of Doha and the wide networks of people who reside here.’ 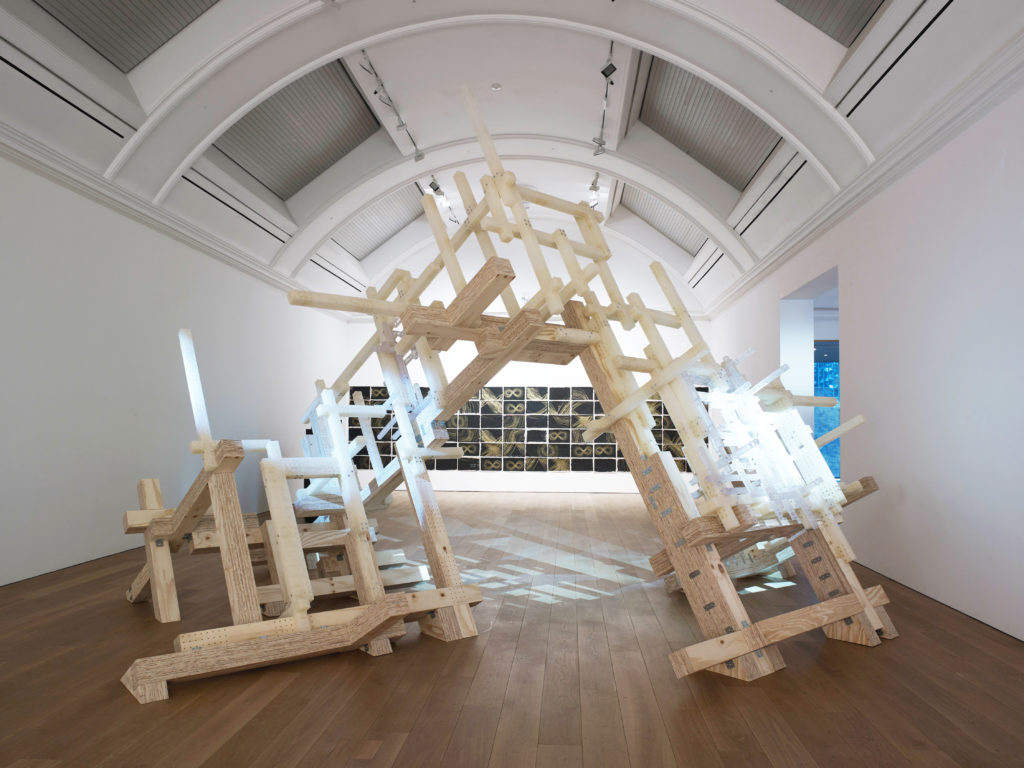 ‘This architectural installation speaks to the evolution of materials and living forms across alternative time epochs. The 3D printed structure represents crystal cerussite, the natural state of lead carbonate, while the light projections refer to the changing transparency of the peppered moth, which occurred during the industrial revolution. In this period, the black and white peppered moth experienced industrial melanism, which meant its pigment became black for better camouflage in an environment polluted with soot residues. This temporary evolutionary strategy was reversed when pollution levels were reduced. In this work, these varied states of transformation explore the relationship between the changing invisible threads of ecology and compressed time.’

Project 88 was established in 2006, in Mumbai. The gallery supports artists in long-term relationships to facilitate understanding and awareness of their continually evolving practices in India and in international venues. They work with established artists and with a generation of emerging artists within India who are making innovative, experimental, and ambitious works in all media and modes within a conceptual framework. Find out more about the selected work, Passwords for Time Travel (2017) by New Delhi-based Raqs Media Collective here.