Whitechapel Gallery: For ‘Notes on Protesting’ you worked closely with school children to write lyrics. Can you tell us briefly about this process? What surprised you the most about working with children to find out what they would change in the world?

Peter Liversidge: The process started with the introduction of rules and how you might go about changing them. It was during this conversation with the children that we introduced the idea of writing down the things they would like to change and how they would change those things, the things in their lives they liked and the things they did not, and those who they would like to thank. The children were very good at picking up the melodies and taking them on and I was impressed by the change in their outlook over time. At first it was very much about the classroom and their home lives – their immediate surroundings. Then as the weeks progressed they started to look outside the school to things that effect other people; dog dirt, heavy traffic, cold weather, caring about other people and being cared for. 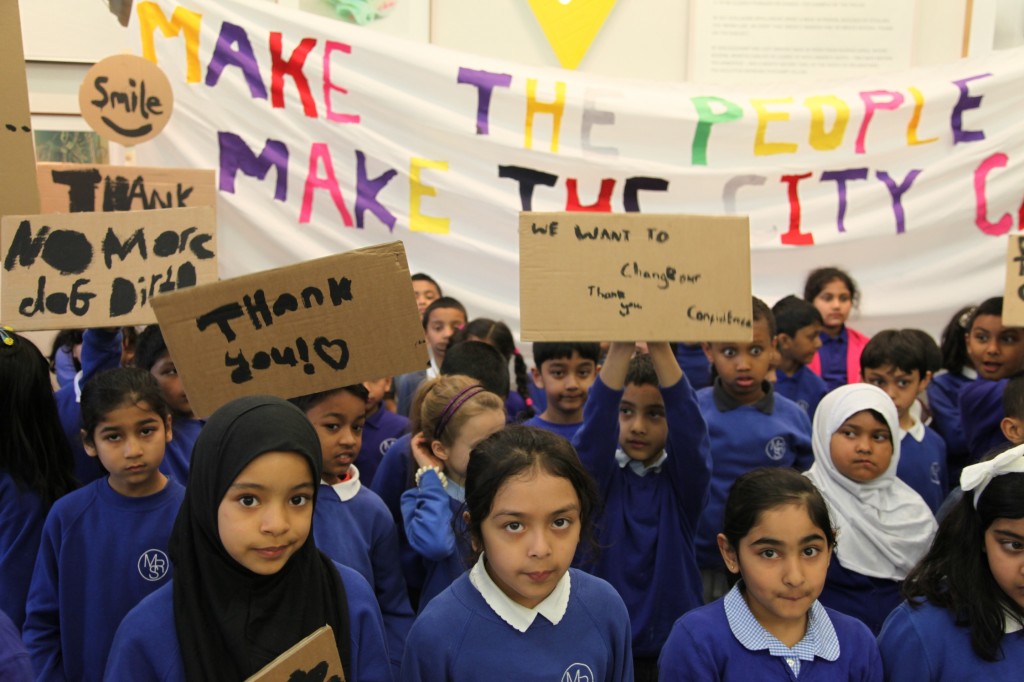 Notes on Protesting performed at Whitechapel Gallery, 1 May 2014

WG: What role would you say your love of music played in the making of ‘Notes on Protesting’?

PL: My record collection and memories of melodies helped me when I got stuck trying to make the lyrics work for some of the songs and chants. The song “I Want to Change My Confidence” was difficult to do. I found myself listening to the last song on Thee Oh Sees album Floating Coffin called “Minotaur” and realised that the melody in the opening section fitted perfectly. Dusty Springfield’s “You Don’t Have to Say You Love Me” also lent its melody to another of the songs by children called “I Don’t Like Cooked Tomatoes”.

WG: You’re an avid record collector, when and how did you start collecting records?

PL: I started buying records when I was 7 or 8 years old. The first time I remember, my gran and I were in Horncastle, and went into Woolworths to buy an Adam and the Ants 7″ with my saved up pocket money, it was either “Prince Charming” or “Kings of the Wild Frontier”. Twelve years ago my record collection up until that point was stolen, and the records from my childhood, good and bad were taken. I slowly started collecting again in 2003.

I’ve also started a record collection for my two sons, who are 7 and 9. Whenever I see a band or group live I get two records signed and dedicated to them. I’ve been doing this for the past 7 years, they have a growing record collection that I will give them, alongside a record player, for their 21st birthdays.

WG: Thanks for choosing your top 10 protest-themed songs to coincide with May Day 2015. What are your personal highlights?

PL: I’ve included P.J Harvey’s “The Last Living Rose” performed on the Andrew Marr show, as it’s a perfect repost to a studio environment. Lyrically very pointed and direct within the context (of performing in front of David Cameron and Andrew Pierce from the Daily Mail) she gives a brilliant brilliant, performance.

On Robert Wyatt’s “Shipbuilding” performance, everything from his self-depreciating introduction, to his near to breaking voice whilst pointing out that the spoils of war are not just for the victors, but also the engineers, fabricators and architects of the machines that we take into war, is totally heart-breaking.

Peter Seeger is a favourite of my sons and the song “Waist Deep In The Big Muddy” and its narrative totally captivates them. It’s a song we all know the words to. Thanks to Wikipedia I’ve read that the song is based on the Ribbon Creek Incident in 1956 and was seen as a song rallying against President Johnson’s policy of escalation at the time.

Some others that should have/could have made it in are: Paul Hardcastle -“19”, Public Enemy – “Fight the Power” and Fela Kuti – “Unknown Soldier, pt. 1&2″.

Peter Liversidge: Notes on Protesting until 14 June at the Whitechapel Gallery. Liversidge’s May Day performance at 12pm in Gallery 2 on Friday 1 May 2015 (Free)