River Studio: A Report from the Foreshore 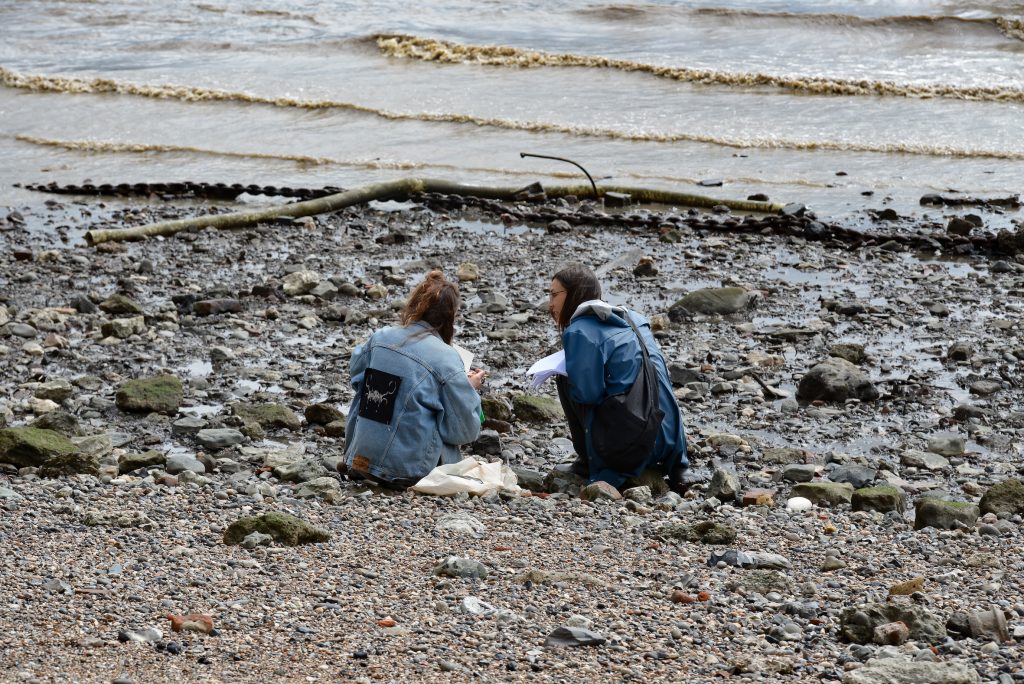 As part of our summer events season, Ways of Knowing: Water / Fluidity, a group of artists and researchers from all disciplines gathered along a strip of Thames beach in Wapping at low tide on 14 August 2021 to consider the material, political and imaginary ecologies of water.

Led by Matterlurgy (artists Helena Hunter and Mark Peter-Wright) the workshop explored how humans and nonhumans co–compose water and considered the cultural, spectral and chemical impacts that form, inform and are formed by the river. Our collaborative enquiries drew on science and art to reimagine how rivers are examined, understood and interpreted.

Participants responded to a series of prompts incorporating methods of critical listening, performative writing and the co-creation of multispecies fictions with river sediments and organisms.

The workshop was developed in partnership with Arts Catalyst and forms part of Matterlurgy’s online project sensitives.stream. 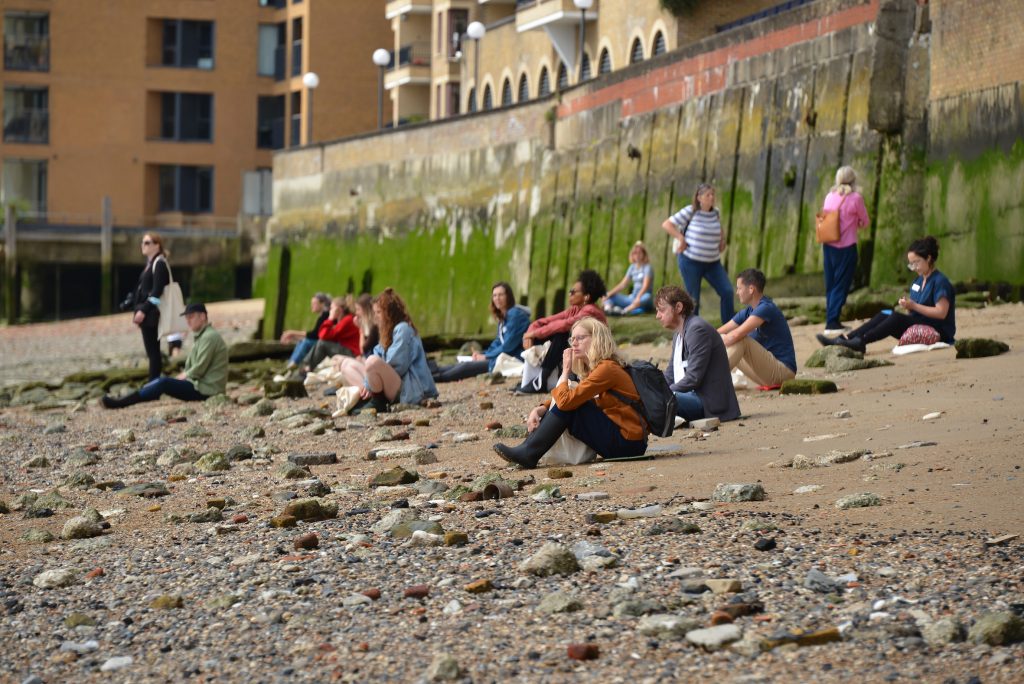 For the first part of the workshop, participants were invited to sit or walk along the shoreline and listen. This process situated ourselves, as bodies and beings within the riverscape, so that we began with an acknowledgement that we are here, we are part of the riverscape, we affect it and it affects us. Walking down to the shoreline, sitting on the beach, the group worked through various prompts; they spent time with earplugs in, closing off all sound to make themselves more sensitive to the aural environment when they removed them. This helped attune us to the environment, and focus on both anthropogenic and nonhuman sounds, from crashing waves to passing boats and birds, to our own breath or rustle of clothing.

Ear Casting Exercise: cast your ear into the river. You are diving beneath the waves, imagining the riverscape from below rather than above. Describe the world underneath:

At first, as my ear drifts and settles to the riverbed, I hear nothing, an endless nothing stretching out in front of my fleshy vessel. Then, slowly, the sound starts to seep in. A trickle begins to enter my canal whispering tiny musings, tap, tap, tap, tap it says before gushing and all sound becomes engulfed in a low hum. Something shifts and sends my ear rolling, water lapping around.

Stones tap out a rhythm against metallic sleeping shopping trolleys

Grit and silt clashing and rubbing like a washboard or sandpaper, bumping up against itself. Eek eek eek eek. 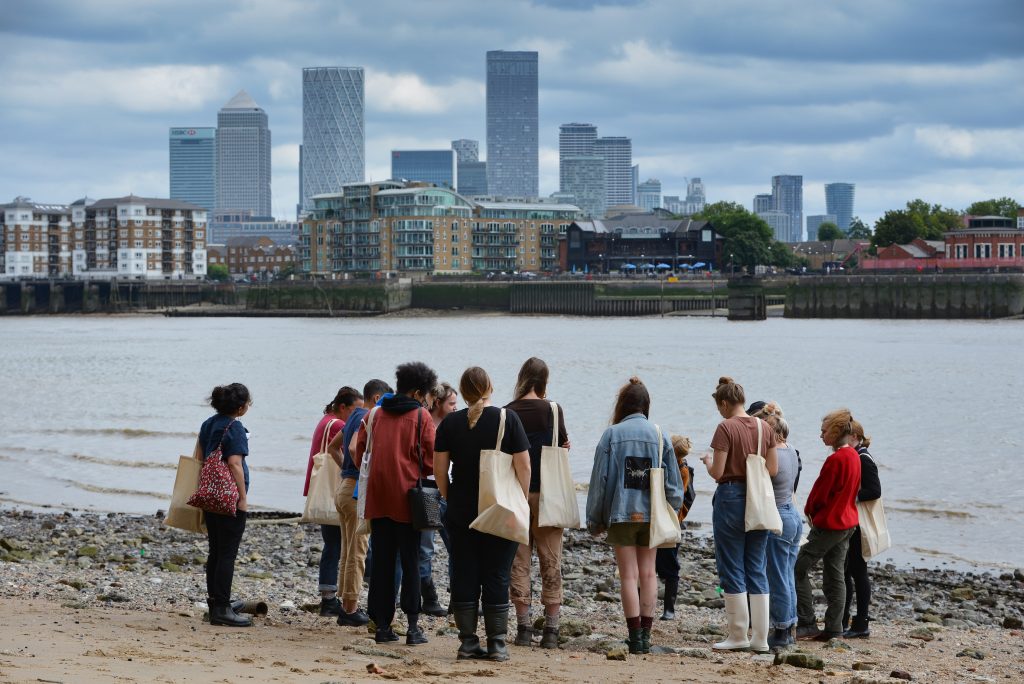 Post-Natural Prospecting Exercise: locate an anomalous object on the foreshore that meshes organic and human made materials. Photograph it, draw it, describe it using voice notes/dictaphone.

Next we explored the river as a ‘manufactured’ site, a river that is not a river but a composition of human and nonhuman activity. Participants were invited to search for hybrid materials that blur the human and nonhuman, natural and industrial. They spent time with these objects, considering their materiality, agency and possible connections to elsewhere processes and events. Together we considered the questions: what can we learn from these post-natural materialities? What are they made from, where do they come from and what do they tell us about the river’s composition?

Here are a selection of participants contributions, poetic and descriptive: 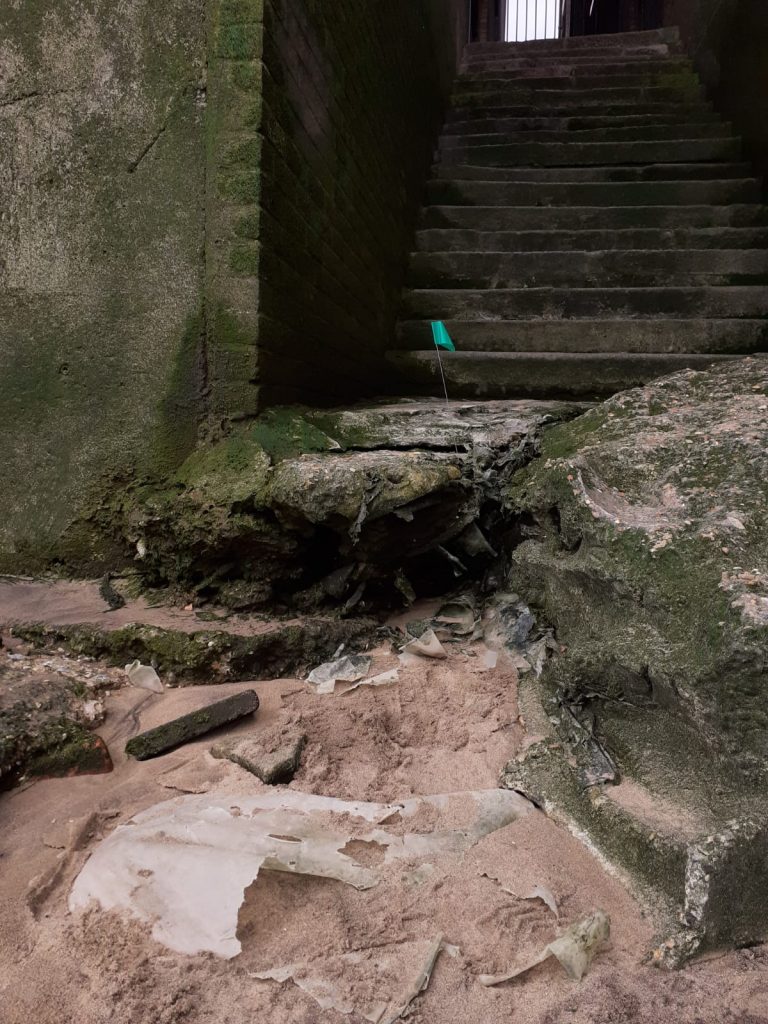 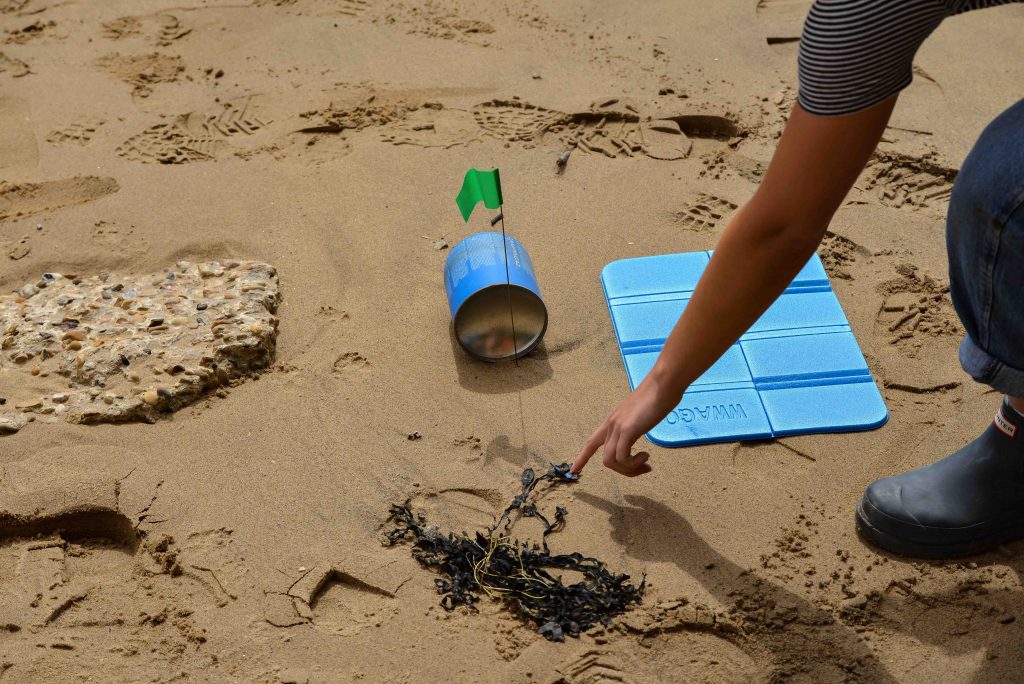 This is a Bone 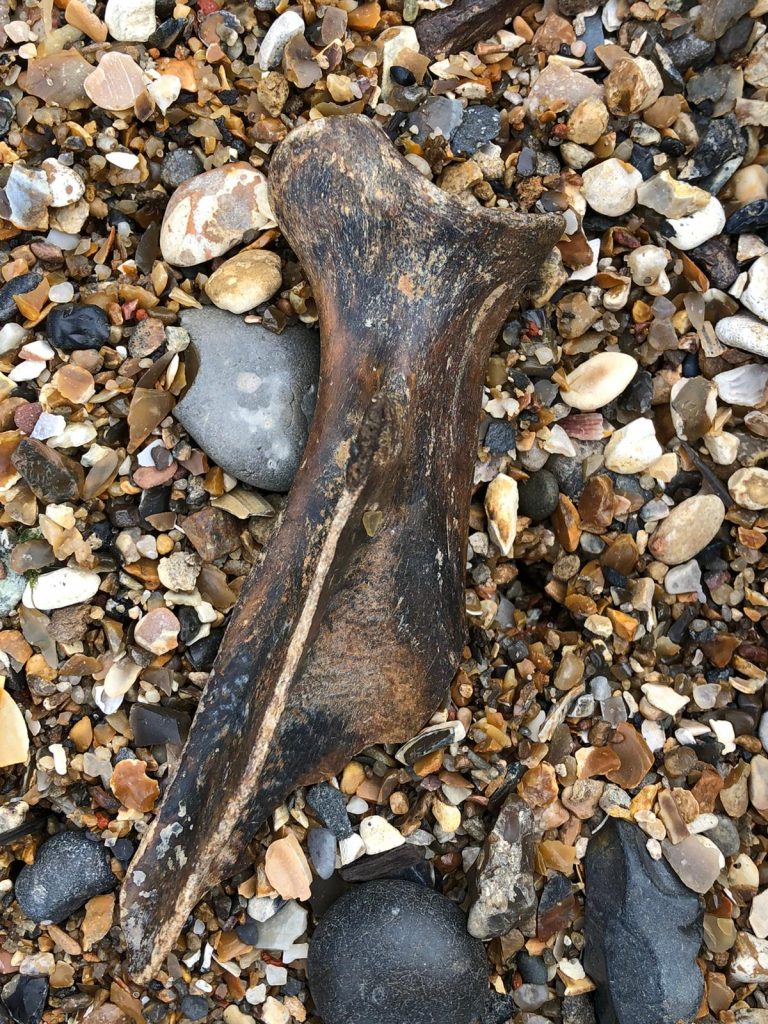 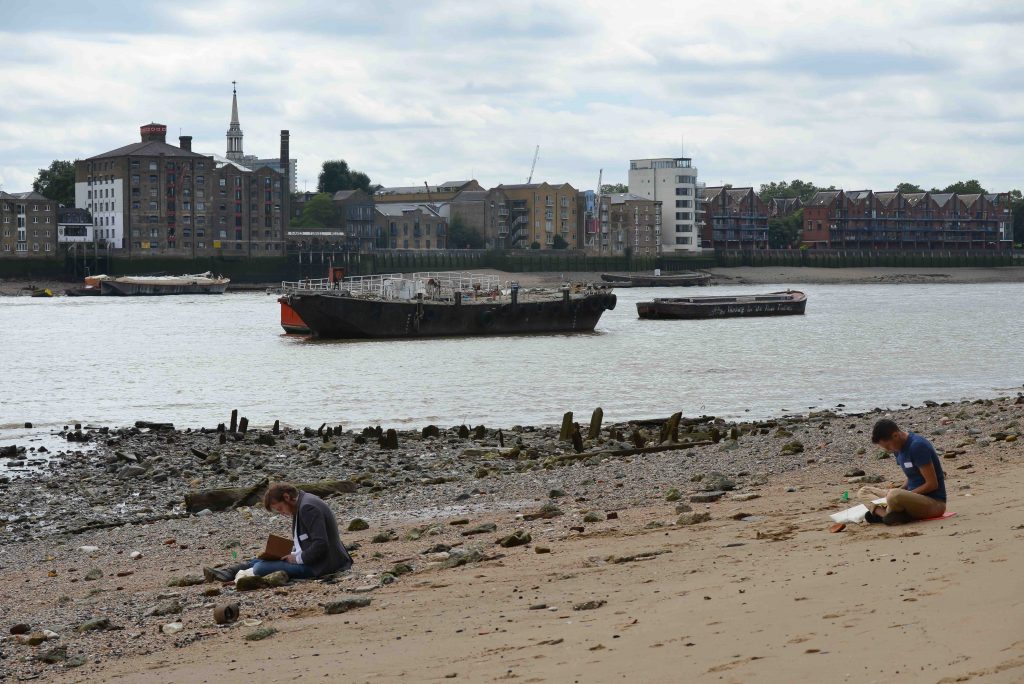 Material Encounters Exercise: participants were offered writing prompts that experiment performatively with point of view, perspective and voice when contemplating their object.

Stories emerged by free writing with objects and materials as sentient agents and in relation to bodies. We wrote critically and speculatively considering its unique perspective within the river’s ecology and history.

Examples of participant writing with materials:

it is everything and nothing at once: ROCK, PLASTIC, ALGAE. Should I approach it as separate strata or a single entity…ALGAE or ALGAE PLASTIC? Stuck between the layers. [Text: Victoria Noakes]

Thoughts consumed with pollutants, can sense vibrations, can taste sugar, the river has a tongue of toxic tragedies…hard histories. 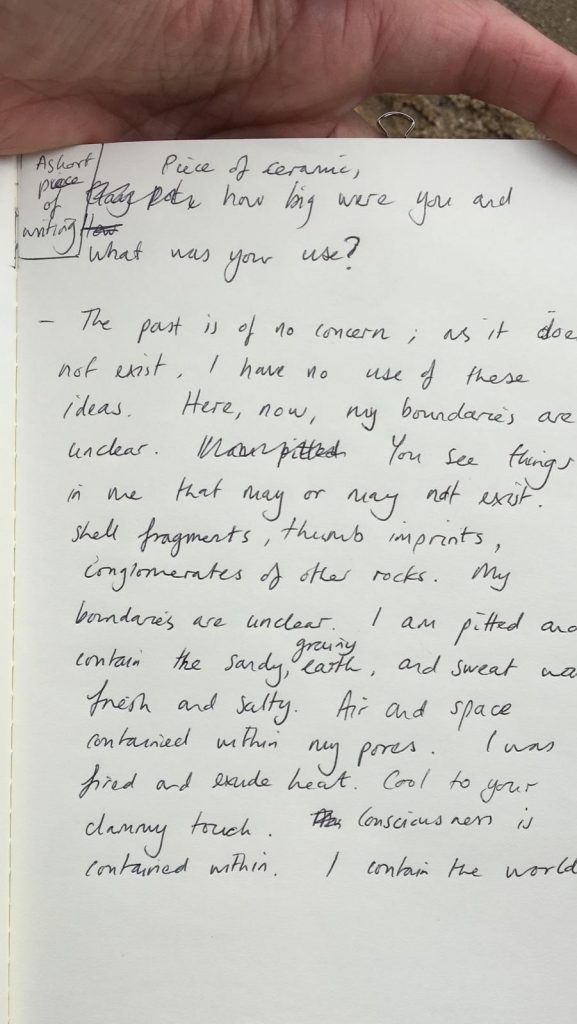 PERSPECTIVES FROM THE RIVER BED

There are many ways of knowing the river, and for this section of the workshop participants were invited to consider a reading of the river by Matterlurgy’s scientific collaborator Prof. Philip Warren, a river ecologist from the University of Sheffield. Phil’s text brings a scientific lens, which is also full of speculation and approximation. For this section the group discussed ways of knowing, particularly in relation to what stories, perspectives or agencies might often slip by unnoticed.

Excerpt from Perspectives from the River Bed by Emeritus Professor Philp Warren, University of Sheffield.

Here, at Wapping, the most obvious things about the river are its size, its colour and the fact that it is tidal. But other things are less obvious. There is anything from 50-130 cubic metres of freshwater every second coming down from the upper reaches of the Thames into the tidal part of the river. This flow meets with, and is gradually absorbed by, the seawater driven up the river by the powerful tides of the North Sea. The result of this meeting of river and sea is both the tidal rise and fall, and an ever-changing blend of salt and fresh water which forms as the river makes its way through central London. This creates an aquatic environment that is unique and challenging: brackish water – neither fresh nor salt, and constantly changing.

The recovery of fish populations is testament to the improvements in at least some aspects of water quality. Not only are fish sensitive to many forms of pollution, but their presence is also an indicator that the invertebrates – the worms, molluscs, insects and crustaceans – they depend on for food are also present. And, just as the physical mixing of the salt- and fresh-water makes this stretch of the river brackish – neither one thing nor another – so too the fish here are a mixture. More than 100 species are found in the tidal river. The majority are marine (> 80 species), only 20 are truly freshwater species and the remainder (another 14 or so) are species which are characteristic of this challenging, brackish water environment. These include smelt, bass, flounder, twaite shad and allis shad. Why is it so challenging? The problem with brackish water is not simply that it is different from fresh- or sea-water, but it is also the variation – tidal river environments typically have huge changes in saltiness, from tide to tide and season to season.

It is perhaps not surprising that this environment typically has fewer species than further up, or further down, the river. And it is not just fish that are affected. Invertebrates, with their small, often thin-skinned, bodies are very subject to the salt concentration in the water. Again, relatively few freshwater, or truly marine, invertebrates thrive in the brackish water zones, but there are some specialists that do and, interestingly many of these are from the marine end of the spectrum, such as opossum shrimps, brown shrimps, ragworms, shore crabs and chinese mitten crabs. Most invertebrates in the river live on, or in, the bottom sediments, and where salt and freshwater mix, the denser salt water tends to run underneath the lighter freshwater, so perhaps this is part of the reason. The species that are here are mostly scavengers on dead organic material, or predators. Not much light penetrates the muddy water, and plants, as you’ll see, are a rarity down here, on the river bed. 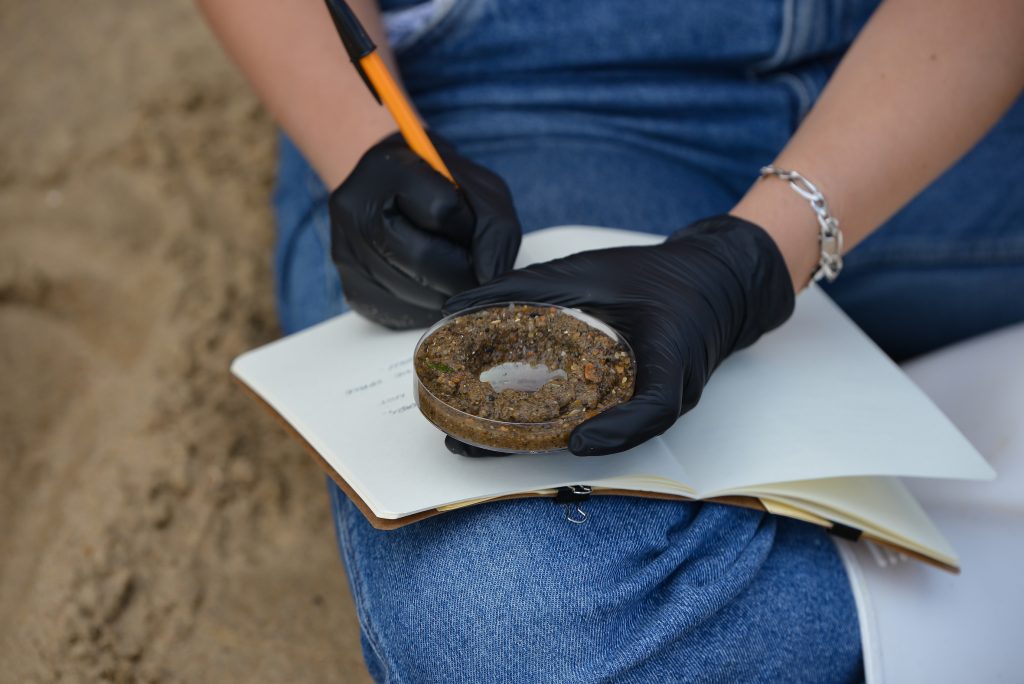 For the final phase of the session participants worked with the idea that the Thames riverbed sediment is a kind of archive, one that contains material and immaterial pasts, presents and possible futures.

Petri dishes of sediment were handed around to participants and we discussed what it might be composed of, how it is alive and breathing, and what it represents. We also shared what might be missing, what gaps and erasures might be lost as well as found in such a sedimentary archive. Following this we annotated and indexed with the sediment, writing the experience of time and tides as a composition of language.

This contribution from one participant was developed and combined with ideas from ‘Writing with Materialities’:

Submerged, drowning depths, a storm of resonating currents resides in turgid landscape, stones tap out a rhythm against the metallic sleeping shopping trollies, compressed sonics appear from above, dispersing on impact.

My body oscillates with the rhythm, flowing through sonic histories, my thoughts consumed with pollutants. Can sense vibrations, can taste sugar. The river has a diverse tongue of murky toxic tragedies. A comedy of ‘you’ve got to be kidding me’ merged with coarse hard histories.

As part of the final task we discussed sediment as a habitat, a place for river organisms to dwell or feed. The sludge worm was introduced as a tolerant actor, able to survive in heavily polluted and low oxygen waters. It is a hermaphrodite that buries its head in the river sediment, undulating its body to absorb oxygen through the skin.

As the tide rapidly encroached, our final speculative task was to step into the sensory skin of the sludge worm and consider what it is like to be this particular organism in this particular river, writing from the perspective of the ‘I’ in response to the following four prompts: 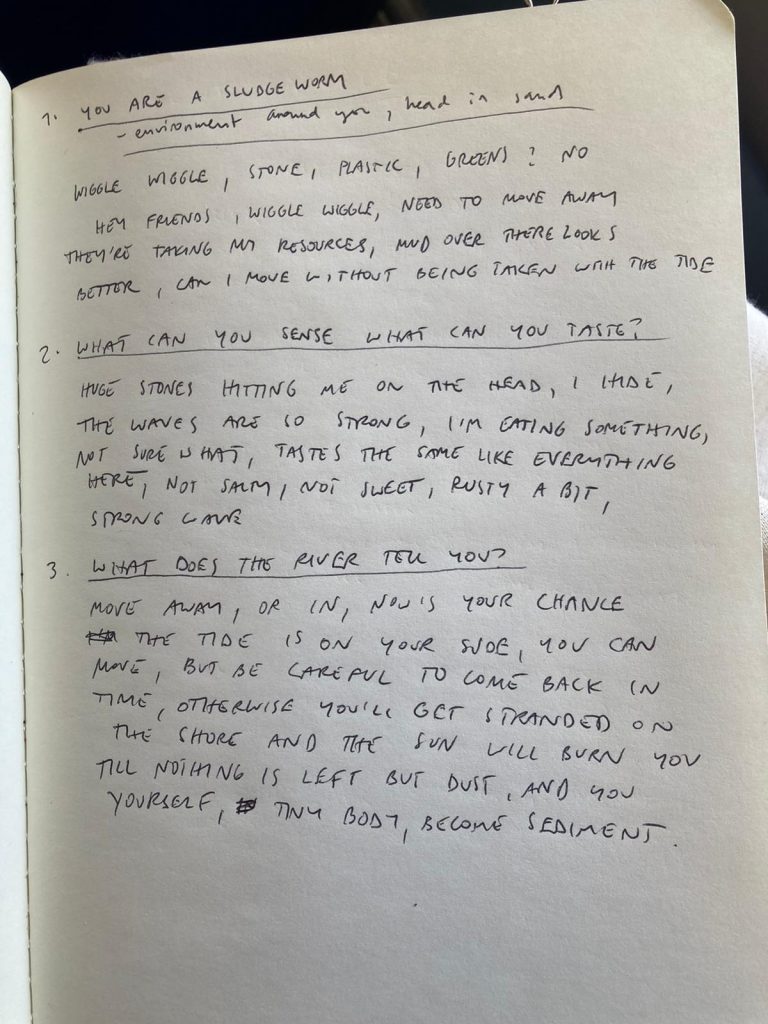 The river tells me of her long history, of former marshlands drained for farms, of oil, gasworks and sand works for glass. Of rich histories and industries and exploited people. Of bodies traversing time and space, of once free flowing before concrete walls were made to contain her. Of existence before she ever had a name.

Thank you to all participants for allowing their work to be shared.

Click here to find out more about the Ways of Knowing programme and future events.