Yulin Huang was appointed Whitechapel Gallery’s inaugural Young Writer in Residence following a call out in summer 2022. Yulin is a London-based Taiwanese/Kiwi artist who uses creative writing in her expanded painting practice, she is also a member of Whitechapel Gallery’s youth collective Duchamp & Sons.

Amelia Oakley, Curator: Youth Programmes, chats to Yulin two months into her residency, which runs from September – December 2022, to see what she’s been up to so far. 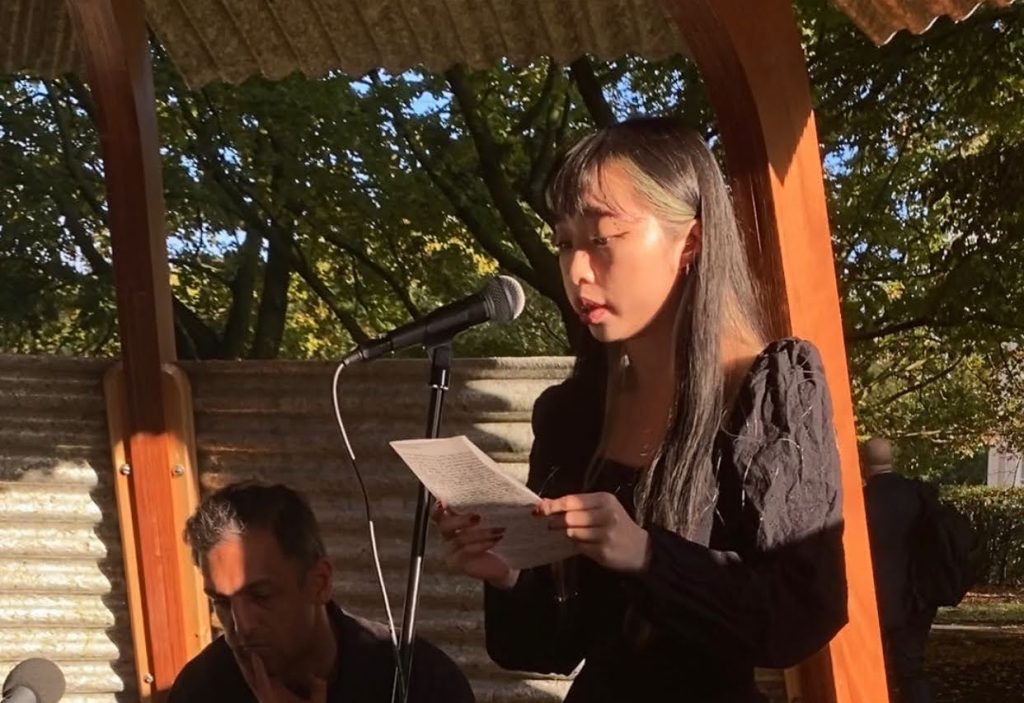 Amelia: How would you describe your artistic practice and relationship with writing currently?

Yulin: I feel like this residency came at the right time for me — I did my BA in Painting but I’ve always felt that writing has been an essential part of my approach. Whenever I was titling my works, I felt like that was one of the most important elements of the work, if not the most important.

As a person who has a lot of thoughts, is dyspraxic, and sometimes has issues grouping ideas together, I feel like writing is the one thing that has really helped me ground myself in articulating what’s happening around me.

During my BA, I was often working to deal with my obsession with documentation by creating quite surreal and cinematic paintings created through collaging together different found images or film stills to recreate nightmares I’ve had. But when I did my MA, I wanted to make language my main medium. I think it’s amazing how, with writing, you can make something that can be so profound with just non-tangible materials.

In my final MA degree show, I built this display case, whereby I celebrated various objects I’d scavenged and felt an inexplicably obsessive pull towards. Writing was a huge part of the installation – it was how I attempted to grasp the abstract paranoia around these encounters. I suppose I was desperately trying to preserve the life of these objects through confessional language.

Amelia: You became the Young Writer in Residence after responding to the call out about for responses to The London Open. How was that experience?

Yulin: I was excited to experience The London Open 2022 because it’s a slice of the London art scene at the time, and it was happening at this particular moment where we’d all been through some sort of collective trauma.

In creating the submission, I wanted to embrace the mindset of going into an exhibition completely open and to think closely about the artworks, and inevitably how they related to me as an artist.

I picked out various words in the exhibition that really resonated with me, and back home started to reflect and weave them together into a confession of sorts, which reflected what I was honestly and truly feeling at the time as an emerging artist in London. Seeing the artists in the show who have already been working in London for some time, it was intriguing to reflect and think:  this could be in my future, or it might not be!

It was a quite existential process, and in some ways it was hard to reach inside myself and take that raw thing that I was feeling and string it into words, but in other ways it was such a cathartic process to just spill out my thoughts and create have something at the end where I felt I had made sense of my experience. 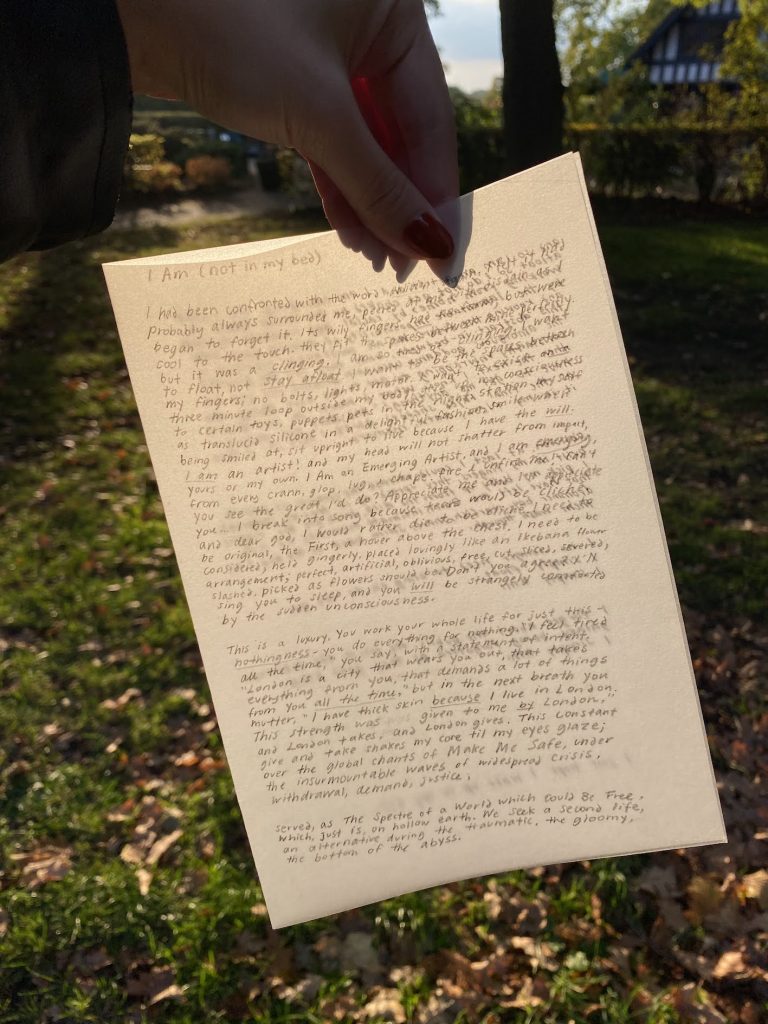 Amelia: You’re about two months into your residency. What has it involved so far?

Yulin: I’ve been spending quite a bit of time in the Education studio spaces at the gallery settling into the space. Being in the gallery, just documenting what is happening to me and my body through thinking about my physicality as well as my imagination helped me to realise: ‘Oh, I’m actually here at this residency’. Writing entries with time stamps was what made that experience sink in.  It has been eye-opening to see the difference between what I’ve written in the early morning versus the afternoon on any given day.

In one of my early studio sessions, I was sat a table in the Creative Studio putting together this surreal narrative of the chairs and the tables around me. Another time I actually had a nap in the space and had a dream, which I then wrote about the phrase ‘the studio is where the heart is’ echoed strangely in dream logic throughout, alongside a visual of someone crafting something with a paper cup and a ball of string.

I’ve also had lots of conversations with the gallery staff here which has been super inspiring to hear so many different perspectives, particularly as so many of them are also artists. That’s definitely something that I’m thinking about a lot these days: how to balance the two characters or aspects of me in my day to day week.

I’ve also been able to delve into the Whitechapel Gallery Archives. One thing that stood out to me, was a folder labelled ‘Exhibitions that Died’, and I thought that was so conceptually fascinating because it suggests that exhibitions have a life, like they’re a sentient being. Which got me thinking, if that’s the case, when does this life begin, and also if it dies, when does it die? Does it live on after its documentation? And also when you access its documentation, it does not mean you’re experiencing the real thing. So what does that mean as a person who’s accessing the past, in this modern day context? That’s a question I want to play around with in my residency – is the documentation more important than the real thing? 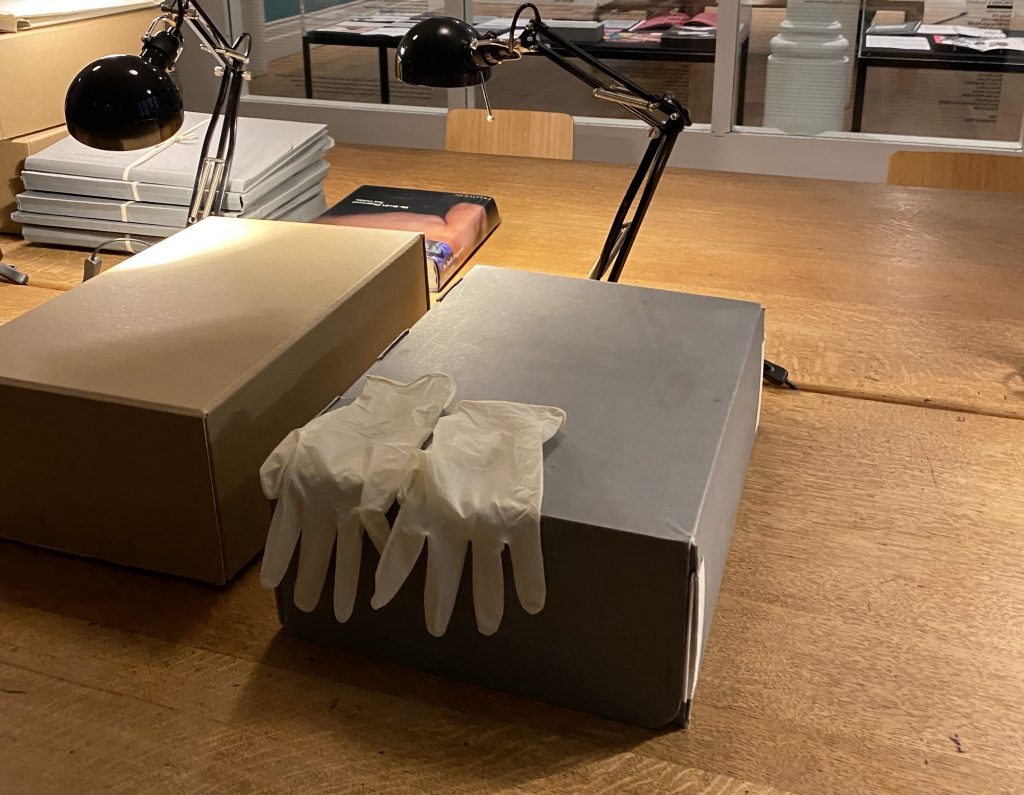 Amelia: What lines of enquiry will you be focusing on in this next stage of your residency?

Yulin: I was recently speaking to one of the Assistant Curators here, Inês [Costa], picking her brain about this idea of the life and death of exhibitions and archives. She spoke to me about how some artists, like Rothko, preplan for their death by leaving specific instructions for their artwork. And our conversation really made me question ‘am I trying to do the same thing?’,  by building this documentation of my experience at this residency, I am leaving evidence and creating a record that I was in fact here.

It’s been making me consider how I can do justice of what I experience here throughout the residency. Particularly the contrast between the hustle and bustle of London life, and the surreal nature of coming here to such a still space, and what thoughts have been conjured up here.

The next step is to synthesise all those thoughts and experiences into something more concrete — some diagrams, drawings, and short confessional, perhaps poetic, writings.

Amelia: How do you think the residency has had a wider impact on your practice?

Yulin: It’s made me embrace the mentality of just writing. I used to have a conceptual dilemma with automatic writing – it’s when I feel I make my best work, but I sometimes think because I’m not really ‘thinking’ before it, perhaps it has less value. But it’s like the surrealist and the DADA where it reveals something about your subconscious because you’re not thinking too much, you’re just spilling.

The residency has allowed me to push my writing style as well. In my time-stamped diary entries, I’m creating more imaginary and fictional narratives of this character who’s in the gallery and just writing. It feels like this is something I can do in the future, in any place, and that’s very exciting.

Amelia: What are you most excited about for this final kind of stretch of your residency?

Yulin: I’m excited about how these things will come together as a physical thing. As some writing, but also as an event I’ll be hosting on  the 15 December at the gallery. I want this to be an event that can inspire other people, and that they can take something from.

I’m also excited to look back at this time, and embrace how my reflections themselves from this period could also change over time.