Astra Taylor introduces her two earlier documentary essays, Zizek! exploring the ideas of the provocative philosopher, and Examined Life, on the engaged possibilities of thought, and including Judith Butler, Avital Ronell and Kwame Anthony Appiah, among others. She will also be in conversation with film-maker and cultural activist Andrea Luka Zimmerman, whose latest film Here for Life is released in November.

“Ludwig Wittgenstein escaped from philosophy by going to the cinema, preferably to see his favourite stars, Betty Hutton and Carmen Miranda, and liked to sit as close to the screen as possible. But for those interested in seeing philosophers on the screen, this engaging movie offers the opportunity to see eight of them walking the streets of Toronto, New York and San Francisco (or going by taxi, wheelchair or in a rowing boat in Central Park), talking eloquently about ethics and the meaning of life and drawing examples from the world around them. Slavoj Zizek is at his paradoxical best and Cornel West, the African-American star from Princeton, who actually appeared in a couple of the Matrix films, is truly charismatic.” – Philip French, from The Observer

“Riffing endlessly and effortlessly and accessibly on his funky Lacanian-Marxist theme, the Slovenian philosopher Slavoj Zizek is on great form in this brief documentary by Astra Taylor. Taylor follows the continent-hopping thinker as he gives huge crowds of student fans what earlier generations never got from Foucault or Barthes or any of the academic big-hitters of yesteryear: media-savvy show business. He’s exhilarating and stimulating.'” – Peter Bradshaw, from The Guardian

Thanks to Maya Osborne and Verso Books.

Astra Taylor is a writer, documentary filmmaker, and activist. Her films include Zizek!, Examined Life, and What Is Democracy? Her books include The People’s Platform and Democracy May Not Exist But We’ll Miss it When It’s Gone and, as co-editor, Occupy! Scenes from Occupied America. She is a Fellow of the Shuttleworth Foundation, for her work against predatory debt. Her website is www.hiddendriver.com

Astra Taylor in London: other events

Andrea Luka Zimmerman is an artist, film-maker and cultural activist. Her work is concerned with marginalisation, co-existence, waywardness, social justice, class and structural violence. Films include the Artangel-produced Here for Life (2019), which had its world premiere in the Cineasti Del Presente international competition of the Locarno Film Festival (receiving a Special Mention), Erase and Forget (2017), Estate, a Reverie (2015) and Taskafa, Stories of the Street (2013), written and voiced by the late John Berger. Exhibitions include Civil Rites, the London Open, Whitechapel Gallery and Common Ground, Spike Island, Bristol. 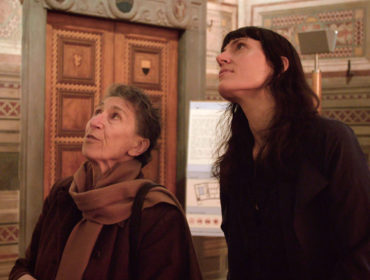 Astra Taylor: What Is Democracy?

Astra Taylor presents her latest documentary essay, What is Democracy?