Theo Crosby: A Life and Legacy

This event was on Friday 3 May, 7pm

Theo Crosby (1925-1994), architect, curator and editor, started the careers of Alison and Peter Smithson, as well as Archigram. He curated the 1956 exhibition This is Tomorrow , and was a founder of Pentagram. He went in search of the Necessary Monument, taught David Adjaye, and brought the classical orders back to architecture at the Royal College of Art.

Deyan Sudjic, director of the Design Museum, explores a fascinating and contradictory career that went from brutalism to Poundbury, followed by a panel discussion featuring Iwona Blazwick,director of the Whitechapel Gallery.

This event is included in our Thursday Lates offer: book your ticket for the event together with admission for Is This Tomorrow? and save £4.95/£1.50 concs, plus receive a free drink at the Whitechapel Refectory. 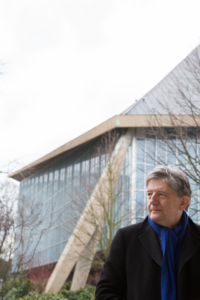 Deyan Sudjic, OBE is Director of the Design Museum in London. His career has spanned journalism, teaching and writing. Deyan was director of Glasgow UK City of Architecture 1999 and in 2002 he was Director of the Venice Architecture Biennale. He was Editor of Domus Magazine from 2000 to 2004, and was Founding Editor of Blueprint Magazine from 1983 to 1996. Deyan has published many books on design and architecture, including The Edifice Complex (Penguin, 2006), The Language of Things (Penguin, 2008), Norman Foster: A Life in Architecture (Orion, 2010), Shiro Kuramata (Phaidon, 2013), B is for Bauhaus (Penguin 2014) and Ettore Sottsass, The Poetry of Things (Phaidon 2015). His most recent book, The Language of Cities, was published by Penguin in October 2016. Deyan was made an OBE in 2000. Image © Luke Hayes