Exhibition
Is This Tomorrow?

‘Ambitious, interesting and a lot of fun’ Time Out

‘Sinister and fun… gives everyone something to think about.’ The Observer

‘Holds its own in terms of poignancy and reflection.’ Aesthetica

In an era when humanity is facing new challenges posed by big data, bioengineering and climate change, Whitechapel Gallery has invited ten groups of artists and architects to explore the potential of collaboration and offer their visions of the future. They imagine scenarios in which queer desire, house music and fracking meet on a mountainside; grief and microbes generate new possibilities for housing; or machines dispense objects and emotions to support our place in the technological world of tomorrow.

Is This Tomorrow? takes as its model Whitechapel Gallery’s landmark exhibition This Is Tomorrow (1956), which featured 37 British architects, painters and sculptors – including Richard Hamilton, Eduardo Paolozzi and Alison and Peter Smithson – working collaboratively in small groups.

Is This Tomorrow? features experimental propositions from some of today’s leading architects and artists responding to issues we face in the 21st century from natural resources and migration to technology and spirituality. Their experiential projects take the form of environments, models, structures and systems, incorporating artworks, objects, film and graphics.

6a architects, established in 2001 by Tom Emerson (b. 1970, France) and Stephanie Macdonald (b. 1966, UK) in London, UK combines a culture of making and innovation with humanity and playfulness in its contemporary art galleries, educational buildings, artists’ studios and residential projects. Co-directors Owen Watson (b.1985, UK), and John Ross (b. 1981, UK) joined the practice in 2007 and 2008 respectively.  Recent projects include the new MK Gallery, Milton Keynes and the South London Gallery Fire Station; Cowan Court, a 68-room hall of residence at Churchill College, Cambridge; and new photography studios for Juergen Teller, shortlisted for the Stirling Prize in 2017. The practice is currently completing projects in Melbourne, New York and Hamburg. Tom Emerson is professor of architecture at ETH Zurich and in 2018 was awarded the Conrad Ferdinand Meyer Prize. Stephanie Macdonald was one of four nominated internationally for Women in Architecture Award 2018.

Adjaye Associates, established in 2000 by Sir David Adjaye OBE (b. 1966, Tanzania), with offices in London, UK; New York, US, and Accra, Ghana, is a practice influenced by contemporary art, music, science, African art forms and the civic life of cities, and is characterised by a sense of curiosity and a research-based methodology. Current projects include a new home for The Studio Museum in Harlem, New York, as well as a new landmark for London – the UK Holocaust Memorial and Learning Centre. Recently completed projects include the Smithsonian Institution National Museum of African American History and Culture, National Mall, Washington DC, 2016; the design of the 56th Venice Biennale with curator Okwui Enwezor, 2015; and Sugar Hill museum and housing development in Harlem, New York, 2015. Other prominent projects include the Idea Store in Tower Hamlets, London, 2004–5. An exhibition of Sir David Adjaye’s work was held at Whitechapel Gallery in 2006.

Andrés Jaque / Office for Political Innovation, established in 2003, Madrid, Spain and New York, US by Andrés Jaque (b. 1971, Spain) works at the intersection of architecture, research and activism. Their work connects through inquiries and subversions of bodily and geopolitical realities. Projects include art spaces, such as CA2M; experimental residential buildings, such us Plasencia Clergy House, TUPPER HOMES, IKEA Disobedients or House in Never Never Land; temporary installations, such as PHANTOM. Mies as Rendered Society; performances such as Superpowers of Ten; and public artifacts, such as Escaravox and COSMO PS1. The practice has been awarded the Frederick Kiesler Prize and the Silver Lion at the 14th Venice Architecture Biennale, 2014. Andrés Jaque is the Director of the Advanced Architectural Design Program at Columbia University Graduate School of Architecture, Planning and Preservation, Phd Architect (ETSAM), Alfred Toepfer Stiftung’s Tessenow Stipendiat (Hamburg) and Graham Foundation Grantee.

APPARATA, is a studio for architecture, design and research founded by Astrid Smitham and Nicholas Lobo Brennan. They design and construct buildings, furniture and books. Current projects include A House for Artists, a new artists co-housing block with public events hall in Barking, London. Completed projects include the restructuring of a vacated Carnegie Library in Manor Park, London, 2015, The White House, Dagenham, London, 2016, exhibition design for Seth Siegelaub: Beyond Conceptual Art, Stedelijk, Amsterdam, 2015, and for The University Is Now on Air, CCA Montreal, 2017; the Friday Sermon structure at the Bahrain pavilion at the 16th Venice Architecture Biennale, 2018. Lobo Brennan was a winner of the 2012 Swiss Art Awards for Architecture, and co-founded the collective Gruppe in Zurich in 2011. They have lectured and taught across Europe teaching studios at Sandberg Institute, Royal College of Art, The Cass and hold an associate professorship at KSA.

Rachel Armstrong (b. 1966, UK; lives in Newcastle, UK) is Professor of Experimental Architecture at Newcastle University. Her work focuses on establishing the conditions for a ‘living’ architecture that couples the computational properties of the natural world with building structures and infrastructures. She is Director and founder of the Experimental Architecture Group (EAG) whose work has been published, exhibited and performed at international biennales, and Coordinator for the Living Architecture project, which is an ongoing collaboration of experts from universities in the UK, Spain, Italy and Austria. She has written a number of academic books including Soft Living Architecture: An Alternative View of Bio-informed Practice, 2018; Star Ark: A Living, Self-Sustaining Spaceship, 2016; Vibrant Architecture: Matter as a Co-Designer of Living Structures, 2015; and the forthcoming Experimental Architecture: Prototyping the unknown through design-led research, 2019; and Liquid Life: On Non-Linear Materiality, 2019. Her fiction books include Invisible Ecologies, 2019 and Origamy, 2018.

Rana Begum (b. 1977, Bangladesh; lives in London, UK) blurs the boundaries between sculpture, painting and architecture. Her visual language draws from the urban landscape as well as geometric patterns from traditional Islamic art and architecture. Light is fundamental to her process. Her works absorb and reflect varied densities of light to produce an experience for the viewer that is both temporal and sensorial. Recent solo exhibitions include Space, Light, Colour, Djanogly Gallery, Nottingham, 2018; A Conversation with Light and Form, Tate St Ives, 2018; The Space Between, Parasol Unit 2016; and Rana Begum, Delfina Foundation, London, 2010. Recent group exhibitions include Frieze Sculpture Park, London, 2018; Actions. The image of the world can be different (part 1), Kettle’s Yard, 2018; Tribute to Sol Lewitt, Gemeente Museum Den Haag, 2016, as well as the 11th Gwangju Biennale, 2016. She was awarded the 2017 Abraaj Group Art Prize and Jack Goldhill Award for Sculpture in2012.

Tatiana Bilbao Estudio,established in 2004, Mexico City, Mexico and Basel, Switzerland by  Tatiana  Bilbao (b. Mexico, 1972) is well known internationally for its use of traditional Mexican construction techniques, for creating sculptural effects that merge geometry with nature, and for a collaborative approach towards its clients.  Bilbao has been visiting professor at Yale School of Architecture in 2014–15, professor of Design at the Universidad Iberoamericana (UIA) in 2005 and Visiting Professor at the Universidad Andrés Bello, in Santiago, Chile in 2008. She was advisor for Urban Projects at the Urban Housing and Development Department of Mexico City in 1998–99. Current projects include a mixed use building for the University of Monterrey, Mexico. Past projects include the Tamayo Museum Pavilion Rufino, Mexico City, 2013; a sustainable housing study for Mexico, 2015, and a project for the Botanical Garden Culiacán, Sinaloa, Mexico, 2004–16.

Cécile B. Evans (b. 1983, US; lives in London, UK) works in sculpture, video and video installations, internet platforms, and performances. Starting with the relationship between human beings and machines, Evans focuses on the value of emotions in contemporary society, exploring today’s forms of human subjectivity, the representation of social roles and the idea itself of the body and mortality. Recent solo exhibitions include AMOS’ WORLD: Episode One, mumok, Vienna, 2018; Cécile B. Evans, Castello di Rivoli, Turin, 2017; Cécile B. Evans, Museum Leuven, 2017; and Cécile B. Evans, Tate Liverpool, 2016.Recent group exhibitions include Blind Faith: Between the Visceral and the Cognitive in Contemporary Art, Haus der Kunst, Munich, 2018; Being There, Louisiana Museum of Modern Art, Humlebaek, 2017–18; and Äppärät, Ballrtoom Marfa, Texas, 2015–16.

David Kohn Architects, established in 2007, London, UK by David Kohn (b. 1972, South Africa) is a London-based practice working internationally on arts, education and residential projects. Current projects include the refurbishment of the ICA, London, a new campus for New College, Oxford, an architecture faculty in Flanders and an apartment building in Berlin. Past projects include the Photography Centre at the V&A, London, 2018; Thomas Dane Gallery, London, 2013; The White Building, Hackney Wick, London, 2012; A Room for London in collaboration with artist Fiona Banner, London, 2011; and an award-winning restaurant at the Royal Academy of Arts, London, 2008.

mono office, established in 2017, Beijing, China by  Liqun Zhao (b. 1982, China), Miguel Esteban Alonso (b. 1992, Spain) and Pablo Alfonso Resa Abad (b. 1991, Spain) is an experimental design practice that operates at the intersection of architecture, urbanism and product design. The practice aims to incorporate both ethnographical approaches to aesthetics – emphasising the relationship between local communities, cultural development and craftsmanship – and techniques from scientific research. In doing so, they employ technologies of production from disciplines outside of their own. Despite its recent formation, current projects of the office include local culture based hotel prototypes, South China, 2018 and the transformation of an industrial textile warehouse complex into a cultural condenser for the city of Beijing in collaboration with Cano Lasso Arquitectos, 2018. Previous projects include Culture Complex, textile warehouse renovation competition, 1st prize, Beijing, 2018 and Floating Bookstore, Langyuan Vintage, CBD, Beijing, 2018.

Farshid Moussavi Architecture, established 2011, London, UK by Farshid Moussavi OBE RA (b. 1965, Iran; lives in London, UK) is a practice focused on design intelligence and creative possibilities through the use of new material and construction technologies. Moussavi is Professor in Practice of Architecture at the Harvard University Graduate School of Design, Massachusetts and was co-founder of the London-based Foreign Office Architects (FOA).  Current projects include residential complexes in the La Défense district of Paris and in Montpellier, and an office complex in the City of London. Recent projects include Architecture Room, Royal Academy Summer Exhibition, London, 2017; Victoria Beckham Flagship Store, London, 2014; Museum of Contemporary Art in Cleveland, 2012; and Architecture and its Affects, installation at 13th Venice Architecture Biennale, 2012.

Marina Tabassum Architects, established 2005, Dhaka, Bangladesh by Marina Tabassum (b. 1969, Bangladesh) prioritises climate, materials, site, culture, and local history in order to counteract what she finds impersonal and confused in architecture globally. Tabassum is Academic Director of the Bengal Institute for Architecture, Landscapes and Settlements and won the Jameel Prize in 2018. She was previously partner URBANA which she founded in 1995. Recent projects include Wisdom of the Land, 16th Venice Architecture Biennale, 2018; Independence Monument and Liberation War Museum, Dhaka, 2013; and Bait Ur Rouf Mosque, Dhaka, 2012; and A5 Architects Residence, Dhaka, 2002. She was awarded the Aga Khan Award for Architecture, 2016.

Watch more films from the artist and architect groups on our Youtube channel. 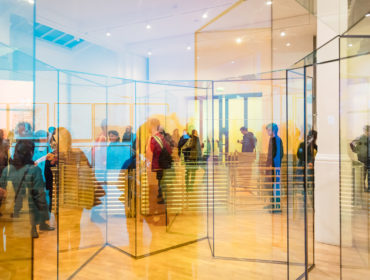 Visions of the Day

15 minute Spotlight Tours of Is This Tomorrow?, led by our experienced visitor services team. 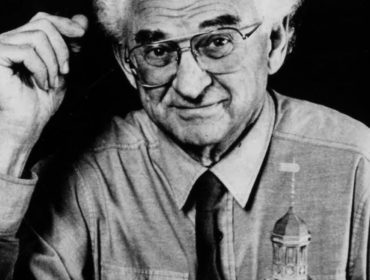 Theo Crosby: A Life and Legacy

Deyan Sudjic, director of the Design Museum, explores the fascinating and contradictory career of Theo Crosby (1925-1994), architect, curator and editor. 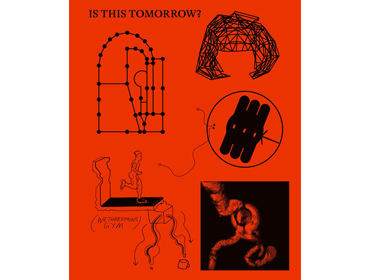 Visions of the Future by Architects and Artists
£24.99

Edited by Lydia Yee, with Cameron Foote and Trinidad Fombella. With an essay by Pedro Gadanho. 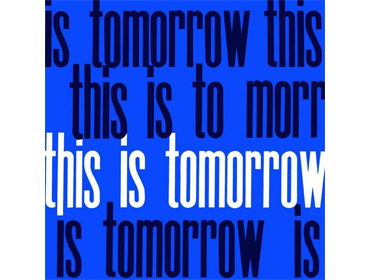 A facsimile of the original catalogue to accompany the seminal 1956 exhibition This is Tomorrow.

The Embassy of the Argentine Republic in the United Kingdom

The High Commission of Canada to the United Kingdom

The Embassy of Mexico in the United Kingdom

The Embassy of Spain in the United Kingdom