This event was on Thursday 2 February, 7pm

Information about access on site at the gallery is available here https://www.whitechapelgallery.org/visit/access/

This event takes place in the Zilkha Auditorium at Whitechapel Gallery. You must purchase a ticket to attend the event. Concession tickets are available. If you require a Personal Assistant to support your attendance, we can offer them a seat free of charge, but it must be arranged in advance. This event is suitable for those over the age of 16. We are unable to provide British Sign Language interpretation for this event. We are unable to provide live closed captioning or CART for this event. This event last approximately 1.5 hours. There are no rest breaks currently scheduled during this event.

An audio recording of the event can be obtained by emailing publicprogrammes@whitechapelgallery.org following the event.

To the best of our knowledge, there are no planned disruptions to local transport on the date of the event.

Free parking for Blue Badge holders is available at the top of Osborn Street in the pay and display booths for an unlimited period. Spaces are available on a first come, first served basis.

Please note: we audio record all events for the Whitechapel Gallery Archive. This audio material may also be used for our Hear, Now podcast series.

The UK premiere of four works from the distinctive aesthetic landscape of Estonia, exploring human nature through time, language and empathy, via conversations between lovers and across generations, linguistic loss and family separation. Filmmakers featured in this programme include Anna Hints and Tushar Prakash,  Piibe Kolka, Len Murusalu and Liina Siib.

The screenings will be followed by a conversation with Len Murusalu, who conceived the project and commissioned the films. 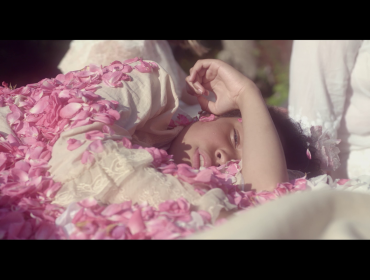 Two lovers, separated by languages, confess to each other in their own native tongues.

Please note this work deals with issues of racism and prejudice.

A conversation through time between a woman and her great grandmother. Piibe Kolka uses PXL2000 toy camera to record pixelated visuals and various messages on audio cassettes in an attempt to establish a time travelling communication. The film probes an epigenetic hypothesis that individual life experiences could influence biological inheritance and gene expressions. The result is a science fictional play between generations, addressing life histories, inherited doubt and the search for possible adventures.

A journey through the past and future myths of the dormant Livonian language.

World War II, mass deportations to Siberia and marginalisation during the Russian occupation caused the extinction of the language of the indigenous people of Livonia. Narrated in Livonian and inspired by a folk song as well as Finnic mythology, the story seeks hope in the perishing time and in memories forgotten.

In the Storm of Roses, Liina Siib, 20 mins

‘In the Storm of Roses’ reflects our time through the life choices of retired Estonian nurse Helgi Kuusik. We see her in a dream-like rose garden, in Southern Estonia, which she established years ago thanks to working in Finnish hospitals and commuting between the two linguistically close, yet economically unequal, countries.

The brief scenes of her idyllic rural garden resemble Victorian-era paintings while being linked with Helgi’s visit to her daughter’s family, who ended up living on the other side of the Gulf of Finland.

Anna Hints and Tushar Prakash have creatively collaborated since 2019. They have written together two short fiction scripts Weight of Light and Sauna Day. Together with Hendrik Mängar they have edited Anna‘s feature-length debut documentary Smoke Sauna Sisterhood (recipient of the Sundance Institute post production grant) which is premiering at Sundance Film Festival World Cinema Documentary Competition Program in January 2023. Anna is deeply rooted in the distinct culture of South Estonia, yet since 2016 years her second home has been India. Tushar, a graduate of the National Polish Film School in Łódź, is originally from Delhi but has been living in Estonia since 2020. Kissing Your Tongue is the couple’s first creative collaboration.

Piibe Kolka is a filmmaker, filmworker and artist working with video, sound and performance. She is drawn by artist moving image as a personal practice with ample room for experimentation and inquiry into the audiovisual, temporal and rhythmic peculiarities of the genre. By alternating between questions of what is happening? and how does it feel? she explores the intensities of presence in films. Currently she delights in the format of Pixelvision video recorded on audio cassettes – a pixelated, fluttering change of pace to the abundance of extremely high-definition playbacks. Kolka has previously worked in New York as a cinematographer and editor of documentaries, narrative features and artist films, she studied anthropology at Tallinn University and documentary and experimental film at the New School in New York.

Len Murusalu is a visual artist, filmmaker, artists’ film curator and researcher. Her interdisciplinary work explores questions around the interpretation of history, memory, language, and time perception – integral parts forming a sense of belonging – using moving image, video performance, photography, sound, text, installation and painting. She has a Master’s degree from the Royal College of Art in Contemporary Art Practice: Moving Image and is a 2020/2021 Oberhausen Seminar Fellow of the Internationale Kurzfilmtage Oberhausen.

Liina Siib is a visual artist, filmmaker, educator, curator and editor who lives and works in Tallinn, Estonia. She has studied printmaking and photography at the Estonian Academy of Arts and in exchange, at the University of Westminster in London. She has held personal exhibitions in Estonia, Germany, Belgium, France, Italy, Sweden, Finland and Latvia. Her recent exhibition and film projects include Linda Vilde Museum, E. Vilde Museum/Tallinn Literary Centre (2021), Huldufólk / Hidden People, Hobusepea Gallery, Tallinn (2020), Politics of Paradise, Tallinn Art Hall (2019), RIBOCA1 Riga Biennial (2018), Urban Symphony in E-minor, Sinne Gallery, Helsinki (2018). In 2020 she co-curated the international group show Resemblance Through Contact: Grammar of Imprint. at the Tartu Art House and EKA Gallery, Tallinn, Estonia.