This exhibition accompanies Action, Gesture, Paint: Women Artists and Global Abstraction 1940-70 and focuses on pioneering dance and performance practices by women artists who were using their bodies to explore freedom of expression, subjectivity and politics.

In New York, Carolee Schneemann’s (1939 – 2019, USA) early paintings in the 1950s were influenced by Abstract Expressionism before she went on to explore the act of painting with her body as both tool and ground. Rosemarie Castoro (1939 – 2015, USA) considered the implications of the body in abstract painting expanding her works into the gallery or studio itself in 1960s New York. In performances, photographs and films, Ana Mendieta (1948 – 1985, Cuba/USA) explored themes of violence against women and the physical and spiritual connection between her body and the Earth.

In Europe, feminist art practices by artists like Renate Bertlmann (b.1943, Austria) and Annegret Soltau (b.1946, Germany) staged the female body in performance works to examine male oppression and sexual violence. Niki de Saint Phalle (1930 – 2002, France) took aim at Abstract Expressionist painting by shooting at her canvases in a documented explosion of both destruction and creation.

The first feminist happening in Korea took place in 1968 with Jung Kangja (1942 – 2017, South Korea) inviting participants to burst balloons attached to her body. Shigeko Kubota (1937 – 2015, Japan) and Atsuko Tanaka (1962 – 2005, Japan) were key figures in the Japanese avant-garde exploring new approaches to gesturalism through performance and video art fusing the personal and the technological. Brazilian artist Lygia Clark (1920 – 1988, Brazil) expanded abstract painting and sculpture into collaborative actions which blurred the distinction between art and life. 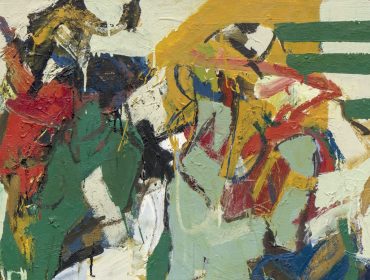