For complete access information about the gallery, please visit https://www.whitechapelgallery.org/visit/access/.

Captions for all films included in Moving Bodies, Moving Images can be accessed in the Gallery via a QR code.

Across a range of projections and screens dispersed throughout the galleries, Moving Bodies, Moving Images brings together a selection of short films made in the last decade by contemporary artists exploring the intersection of dance, choreography and moving image. The presented works focus on performing bodies and unfold as both individual works but also as collective storytelling, exploring timely topics, ranging from gender politics and desire to bodily memory, resistance, personal healing and collective identities.

Also on display are materials related to the making of the films, including production stills, research, reference texts and scores.

Films are on a timed rotation. To enhance your visit we recommend booking a free time slot.

This exhibition has been generously supported by the Swiss Arts Council Pro Helvetia.

Please note some content in the exhibition you are about to enter contains expletives and nudity. There are also flashing lights in Gallery 8.

Alexandra Bachzetsis (b. 1974, Zurich; lives and works in Zurich) is an artist and choreographer. Her interdisciplinary practice unfolds at the intersection of dance, performance, visual art and theatre, involving choreographies of the body and how popular culture provides source material for gesture, expression and identification. She explores the mutual influence between the use of gesture and movement in mainstream, commercial media and in art.

Pauline Boudry / Renate Lorenz (b. 1972, Lausanne and 1963, Berlin; live and work in Berlin) have been working collaboratively since 2007. Their film installations capture performances in front of the camera, often starting with a song, an image or a score. Their choreography focuses on the tensions between visibility and opacity, questioning normative historical narratives and conventions of spectatorship. The performers in their films are choreographers, dancers, artists and musicians, with whom they have an ongoing dialogue about performance, the violent history of visibility, but also companionship, glamour and resistance.

Eglė Budvytytė (b. 1981, Kaunas, Lithuania; lives and works in Amsterdam) works at the intersection of music, poetry, radio broadcast, video and performance to explore the power of collectivity, vulnerability, and permeability between bodies and the environments they inhabit. Drawing on choreography composed of existing movements and gestures, Budvytytė questions the consciousness of our surroundings through situations which are part-staged and part-improvised.

Eric Minh Cuong Castaing (b. 1979, Seine-Saint-Denis, France; lives and works in Marseille, France) is an artist and choreographer. He was associate artist at the Ballet National de Marseille from 2016–19. His choreographic works explore relational modes, representations and the perception of bodies in the 21st century, questioning the relationship between reality and fiction, nature and culture, organic and artificial. In 2007, he founded the dance company Shonen, who produce shows, installations, performances and films.

Alia Farid’s (b.1985, Kuwait; lives and works in Kuwait and Puerto Rico) multidisciplinary practice ranges from writing and drawing to film and sculpture. Farid gives visibility to narratives that are obscured by the dominant discourse. She writes ‘I began making work somewhere in between art, architecture and urban anthropology. Today I’m still interested in these areas, but with a much more focused point on telling how informal networks are forced to make up for lack of formal structure.’

Hetain Patel (b.1980, Bolton, UK; lives and works in London) works across film, performance, painting and costume design to look at ‘identity and language, challenging common assumptions based on how we look or where we come from.’ Growing up in a working-class British Gujarati household on the outskirts of Bolton, Patel turned to popular culture as an escape from racial abuse and social alienation. Patel works across multiple languages, culturally and artistically, and often collaborates with artists from different disciplines and with family members.

Bárbara Wagner and Benjamin de Burca (b. 1980, Brazil and b.1975, Germany; live and work in Recife, Brazil) produce films and video installations that feature protagonists engaged in cultural production. The duo typically collaborate with non-actors, from writing scripts to staging performances on camera. The resulting works are underscore the cultural, economic and social conditions of the contexts in which they are filmed.

Alberta Whittle’s (b.1980, Bridgetown, Barbados; lives and works between Barbados and Scotland) research-led practice is concerned with the legacies of slavery and apartheid, the erasure of Black people in everyday society through the avoidance and suppression of Black histories and perspectives, and ecological emergency. Her moving-image works interweave filmed footage and found material, text, and sound. Published to accompany the Moving Bodies, Moving Images exhibition at Whitechapel Gallery, this 200-page catalogue illustrates a bold assembly of contemporary moving image works through a full selection of colour stills and three newly commissioned essays exploring the political and narrative potential of the performing body. 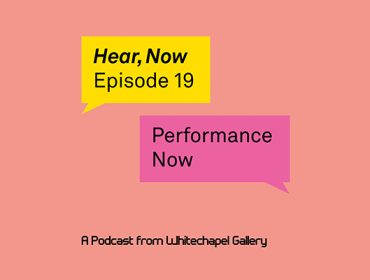