London and Birmingham based artists Simon & Tom Bloor worked with the pupils and teaching staff of Hermitage Primary School, Tower Hamlets for a period of one academic year (2011/12).

Taking inspiration from mid 20th Century educational books such as ‘Working Big’ by John Lidstone and ‘Learning to See’ by Kurt Rowland, the Bloors set out to work with children and teaching staff to experiment with production and develop new ideas for playful, useful art. Testing out different ways of working together, they instigated a range of workshops – from capturing the patterns and textures of school buildings, to large-scale social sculptures using sticks and sheets of wood. At all times, students and teachers were encouraged to work with the artists on a big scale and in an abstract way.

The final term of the residency saw the Bloors set up a temporary outdoor studio, where they worked with students to crush, mould and shape simple clay forms (influenced by the artists’ thinking on the rebellious nature of creation through destruction), and plan the redesign of the school’s outdoor chalkboard. The clay forms will eventually be cast in chalk and used as part of an interactive chalkboard at the Whitechapel Gallery as part of the Children’s Commission (19 March – 9 June 2013), while the school’s new chalkboard has been installed in the playground.

Interview with Simon and Tom Bloor

Supporting artist Ella Phillips ran an after school art club alongside the residency, and kept the school community updated through regular articles in their weekly newsletter and noticeboard. She also documented the residency through photography and film, resulting in a playful documentary with an aesthetic reminiscent of 1970s-80s educational videos and children’s television (see above).

Simon & Tom Bloor were born in Birmingham in 1973 and are amongst the founding directors of Eastside Projects, Birmingham. They have had solo exhibitions at the South London Gallery (2011), Modern Art Oxford (2010) and have made public works for Bristol City Council (2011) and Ikon Gallery, Birmingham (2009). They have developed large-scale permanent public artworks for London and Cambridge with Futurecity, and were appointed as the Whitechapel Gallery’s Children’s Art Commission artists in October 2012.

Find out more about Simon and Tom Bloor 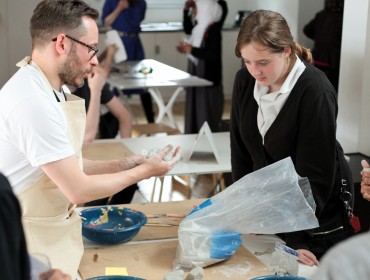