– Information about access on site at the gallery is available here https://www.whitechapelgallery.org/visit/access/

– We encourage all visitors to take a lateral flow test before attending events and to wear a face covering during events.

– For more information on health and safety measures in relation to Covid-19, please see: https://www.whitechapelgallery.org/visit/coronavirus-update/

– This event takes place in the Zilkha Auditorium at Whitechapel Gallery

– You must purchase a ticket to attend the event. Concession tickets are available. If you require a Personal Assistant to support your attendance, we can offer them a seat free of charge, but it must be arranged in advance.

– This event is suitable for those over the age of 16

– We are unable to provide live closed captioning or CART for this event.

– This event last approximately 1.5 hours. There are no rest breaks currently scheduled during this event.

– An audio recording of the event can be obtained by emailing publicprogrammes@whitechapelgallery.org following the event.

Please note: we audio record all events for the Whitechapel Gallery Archive. This audio material may also be used for our Hear, Now podcast series.

Curated and introduced by Agnieszka Rayzacher.

Supported by The Polish Cultural Institute. 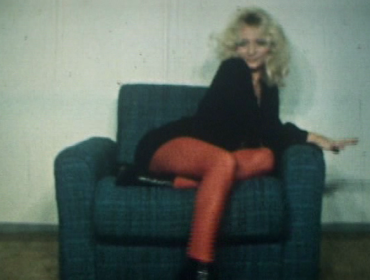 Natalia LL‘s first film work and at the same time her most minimalist, purely conceptual piece.

One of the most frequently interpreted and distinctive works in Polish contemporary art. Consumer Art is an extensive photographic and film cycle developed in the course of three years. It depicts young women sensually licking bananas, wiener sausages, salted sticks, ears of corn and caressing them with their lips, as well as feasting on custard and jelly. The footage is varied – the majority of images are black and white and depict a single model in a tight frame, most often a blonde woman with a girlish appearance. Natalia LL also collaborated with a different model, a brunette who is often portrayed in wider shots with bare breasts. With her look and expression, her photographs and films take the representation of women and their erotic fantasies to a higher level.

Natalia LL has been a pioneer in Polish art in looking at the female body through a woman. The somewhat blurry film shows a naked young woman touching and playing with her breasts. This is an uninhibited image of sexuality that can give pleasure to the viewer, but at the same time, it is a record of a spontaneous discovery of one’s own carnality and pleasure by the subject registered with the camera.

The work resulted from one of photographic and film seances, as the artist called them. The use of the procedures of multiplication and the mutual overlapping of semitransparent images on photographic film produces the impression of movement: veiling and unveiling the private parts of the body, but also a sense of artificiality and subversion inherent in photography and film that records the image of reality and “falsifies” it at the same time.

At the end of the 1970s, the artist’s work witnesses a change and enters the spheres of mysticism, mythology and cosmology. Yet, the body continues to function as her primary medium and the performances were seldom performed directly for the camera, although the awareness and necessity of film documentation was obvious for the artist. The first of a cycle of those seances, titled Dreaming, was conducted in 1978. The actions adopted different forms – Natalia LL was asleep in the presence of the viewers or only with the camera as a witness; she was also experimenting with sleeping in the pyramid. Those seances stemmed from the pursuit of reaching the subconscious – the artist very often noted down her dreams immediately after waking up.

Natalia LL carried out the seance Points of Support, during which she performed nude gymnastics combined with choreography on a meadow in the Pieniny National Park. Each of the figures that her body adopted corresponded to a certain stellar constellation, thus building a bridge between the woman and the universe.

The time after 1990 in the output of Natalia LL is marked by an interest in ecology and natural energy. The artist always loved cats, they were often the protagonists of her casual, private photographs. This video is one of the rare artworks with the participation of these animals.

In this work Natalia LL impersonates for the first time Brunhilde – a character from Nordic mythology, the heroine of the opera Valkyrie by Richard Wagner, the artist’s favourite composer. Through the brave heroine she talks about the transience, ultimate matters, meeting of Eros and Tanatos. She uses a banana, a symbol of sexuality familiar from her earlier works, as well as kales and skulls, well-known symbols of death.

After the great flood that hit Poland in 1997, Natalia LL referred to this fact through her performance on the bottom of a dried-up reservoir on the Bystrzyca River. “Menego” is a title taken from the prose of the Polish poet Cyprian Kamil Norwid and refers ambiguously to drowning in water as well as drowning in the banality of everyday life. The artist sees art as a safeguard against spiritual drowning.

Natalia LL (1937-2022, Poland) studied at the State High School of Fine Arts in Wrocław and received her Diploma of the Association of Polish Artists Photographers in 1964. Her media are photography, drawing, performance, and video. In 1970 she co-founded the PERMAFO Gallery in Wrocław. Since 1975 she is engaged in the International Feminist Art movement. She worked as a

Agnieszka Rayzacher is an art critic and curator. She has been running the lokal_30 gallery in Warsaw since 2005. In her practice she focuses primarily on researching and presenting the work of women artists and supporters. Co-founder of the Feminist Seminar discussion group on art and feminism. The exhibitions she has curated include: I HAVE A DREAM, Wrocław Contemporary Museum and Center for Contemporary Art / National Museum of Thessaloniki (2012 and 2013); Escape from the ‘Liberty’ Cinema, Galerie im Saalbau, Berlin (2016/17); Karolina Breguła Exercises in Losing Control, Municipal Gallery Arsenal, Poznań (2022), Sleepless in Warsaw, A.I.R. Gallery, New York (2022). Editor and co-editor of books and author of texts including: Natalia LL Doing Gender (Warszawa, 2014); Ewa Juszkiewicz: The Descent Beckons (Warsaw, 2015); Ewa Zarzycka: Heyday (Warsaw, 2016); Her Own Way Female Artists and the Moving Image in Art in Poland: From 1970s to the Present (Tokyo, 2019); The Feminist Avant-Garde of the 1970s (Vienna, 2021); Anna Orbaczewska: I Do Not Know How to Tell You This (Warsaw, 2021).