Out of the Margins: Performance in London’s Institutions 1990s – 2010s

Out of the Margins: Performance in London’s institutions 1990s – 2010s

Out of the Margins examines the shifts in institutional engagement with live art, highlighting key moments that raised this cultural practice from underground and marginalised to an acknowledged art form.

Throughout the 1990s, established visual arts institutions in London began programming live art more systematically, and new organisations were founded with a mission to support the development of performance art. This exhibition revisits seminal moments in this history from Lois Keidan’s incorporation and adaption of underground nightclub performances at the Institute of Contemporary Arts (ICA) in 1996, to the inception of the Live Art Development Agency (LADA) in 1999, and the milestone series A Short History of Performance (I, II, III, IV) at Whitechapel Gallery between 2002 and 2006.

Out of the Margins attempts to map the live art scene by looking at initiatives of various kinds of organisations such as Gasworks, Matt’s Gallery, and The Roberts Institute of Art, which were vital in enabling a range of experimental and ephemeral practices in London. Also featured is Performance Matters, a collaborative research project established by Goldsmiths, University of London, University of Roehampton and LADA to analyse the critical discourse around performance. Through the above and a range of live art events that followed, not only in London but across the UK, performance art assumed its place in the institutional realm, culminating in the 2012 opening of The Tanks at Tate Modern, a dedicated space in a major UK museum.

Rarely seen archive material, photo and film documentation from the period are showcased, as well as references to key artists, theoreticians and cultural producers who elevated the status of performance within the visual arts.

The exhibition contains explicit images of nudity and blood in the documentation of performances exploring and pushing the boundaries of the body. These might be disturbing for some visitors.

** Please note, Jannis Kounnelis’s work featured above is an archival image from the 2002 exhibition A Short History of Performance: Part One. The current display Out of the Margins does not include live animals. 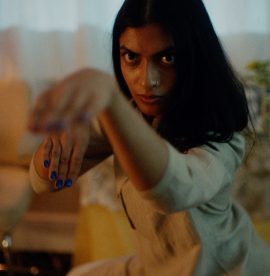